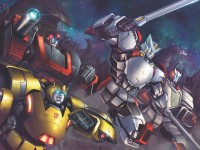 There may not have been a comic coming out this week, but the official Transformers Facebook page still delivers an interview with a creator: Marcelo Matere! Check out the interview below, mirrored for those of you without Facebook access.

To celebrate this week’s BOTCON convention, IDW Publishing and Hasbro sat down with TRANSFORMERS comic book artist, MARCELO MATERE! Marcelo recently completed a run of variant covers on the TRANSFORMERS: MORE THAN MEETS THE EYE and TRANSFORMERS: ROBOTS IN DISGUISE comic books. Click the link for the interview! http://on.fb.me/15Gk8ac To celebrate this week’s BOTCON celebration IDW Publishing and Hasbro sat down with one of our favorite TRANSFORMERS comic book artist, MARCELO MATERE! Marcelo recently completed a run of variant covers on the TRANSFORMERS: MORE THAN MEETS THE EYE and TRANSFORMERS: ROBOTS IN DISGUISE comic books—but he’s been part of the TRANSFORMERS community for a long time! Check out his comics—and lots of other ones—at comic book stores everywhere and for downloaded at https://transformers.comixology.com/ or via the Comixology and iBooks apps on your computer or mobile device!


Q: When you started drawing Transformers, did you try to emulate any other artist’s style, or did you just go with your own way of doing it from the start?

MARCELO MATERE: Professionally, yes, at that time I was trying to emulate the Dreamwave style, when they started the TRANSFORMERS ARMADA comic and the new G1 comics. It was a style close to the cartoon, but with some anime touches in the colors.


Q: How did you first come to be involved in working on Transformers comics for IDW? Was it a real dream come true when it happened?

MARCELO MATERE: In 2006, I was asked to do a two-page test for the new IDW comic books.At that time I was working on TRANSFORMERS: CYBERTRON package art—and I was able to finish only one [page of the tryout]. One year later, [IDW Publishing editor-in-chief] Chris Ryall asked me if I would be interested to work on one of the TRANSFORMERS SPOTLIGHT comics. I’d already worked on comics before, doing TRANSFORMERS UNIVERSE pages for the Official Transformers Collectors’ Club in 2004, and later on one TRANSFORMERS: ENERGON issue. But when I discovered the character Chris wanted me to draw —Soundwave— man, I freaked out!It took me almost a week to realize what was going on. I was really lucky because I had a chance to work again with Simon Furman!


Q: When you’re drawing a character design or a cover/comic page, how long does the process take for you and what kinds of pencils/markers do you use?

MARCELO MATERE: Okay, for character designs, I usually do them all-digital, so it takes me two hours for each stage—sketch/pencil or inks and colors. It depends on the character and how complex it is. As for a cover, it usually takes me a day-and-a-half to do one from sketch to final inks. I usually start with the digital sketches and then I print it and clean up the pencils and do the inks with pen and markers. For interiors, I usually start the layouts/roughs digitally, then print it and do the pencils on the light box, then I move to the inks. This process usually takes me a day and a half. It depends on the page. When I do pages digitally they take less time, like a day.


Q: Having drawn and contributed so much to Transformers so far, do you have any plans to write your own story as well as draw it?

MARCELO MATERE: I’ve had some ideas but never develop them to a level that I can tell you, “okay… let’s make a TRANSFORMERS story about it.” I have plans to write a comic book/kids book soon. Maybe I should start with TRANSFORMERS? Let’s see!


Q: Are there any characters that we haven’t seen yet that you would like to bring or re-design just for the comics IDW publishes?

MARCELO MATERE: I would love to see (work if possible) combiners like Predaking and Liokaiser! They are awesome!


Q: Your long time collaborator on the IDW comics is Priscilla Tramontano. How did you meet and start working together on Transformers?

MARCELO MATERE: In 2007, I needed an artist to help me with the new TRANSFORMERS UNIVERSE line for Hasbro, and a friend of mine sent me a Deviantart page of a young girl with really cool TRANSFORMERS illustrations. She was really fast and loved to draw robots! So I hired her and she started to help me with the colors for a lot of package art and concept art stuff for Hasbro. When I started working on a MAXIMUM DINOBOTS cover, I asked my editor if Priscilla could color some covers. Since they loved her work, and she worked for me, we started to work together on a lot of covers. I’m really lucky to have her as my colorist!


Q: You’ve worked on many Transformers projects for IDW over the past 8 years. Is there one story or moment that really stands out for you?

MARCELO MATERE: I think I was lucky enough to work on great projects like the SPOTLIGHTs SOUNDWAVE, GRIMLOCK, and METROPLEX. I was able to draw some of my favorite characters! Then covers for the TRANSFORMERS ANIMATED series—I was supposed to work on the interiors, but I had no time because I was working on the TRANSFORMERS UNIVERSE package art for Hasbro. SPOTLIGHT: METROPLEX was really cool working on the sense of scale of the characters and action. Loved that work as well. And that was my first comic book that I worked digitally on all the pages. It was a great experience!


Q: You’re back again at Botcon as a guest. How much do you enjoy talking to the fans and drawing different characters for them? And do you like to be a fan yourself at an event such as that?

MARCELO MATERE: I love to talk with the fans! I was a fan before I started working professionally, so I respect them a lot. And I really like to make things in my work that fans will enjoy, like little cameos or references to other TRANSFORMERS lines. I like to be a fan, especially with the other artists from the comics, cartoons, video games, and even movies, when I meet them.


Q: Obviously you are very busy with many different projects. Can you say or drop any hints about what you have coming up?

MARCELO MATERE: Yeah, this past month before Botcon was crazy for me! Doing great works for Hasbro, IDW and other companies. I’m also working on a new stuff for IDW, and it’s not Transformers… I think you will know more about it soon.

The pic is Ironhide, Ratchet, Bumblebee and Drift