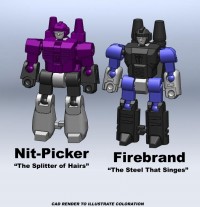 MasterShooter is back with their second product, dubbed the Shooter Masters! These figures are the perfect complement to your Classics collection, and would fit perfectly when displayed with Scourge, Kup, Hot Rod, and Blurr! Designed to evoke a certain collection of classic companion figures, the Shooter Masters transform from gun to robot and are colored to fit their inspirations. Each Shooter Master figure has a stepped handle, capable of fitting any figure with a 4mm or 5mm peg hole, and each also includes a 3mm clip adapter, making them compatible with any figure that uses the clip system to mount weapons!

In addition Captured Prey has listed pre-orders for two sets of store exclusive Shooter Masters based on the G1 Double Targetmasters for Spinister and Quake. You may remember the list of rumored BotCon exclusive figures included a Spinister repaint of HFTD Deluxe Tomahawk that these guys might work well with.

Of course, I also don't have any CHUGUR figures they'd logically go to, since despite what Reprolabels says, the leftovers from the Bruticus Maximus rerelease do not look that much like Spinister or Quake.

Will I still get these regardless? Well...yeah...
Re: MasterShooter Collectibles Exclusives: Nit-Picker & Firebrand, Pinnacle & Firebox (1335870)
Posted by Optimusfan79 on January 19th, 2012 @ 7:10pm CST
I figured out who can be used to be Misfire the burgandy cybertron Starscream that came in that 2-pack with Vector Prime. He resembles him enough to play that roll.

Optimusfan79 wrote:It's no offense takin, from u. Or the other people either I like going back & forth with sarcastic comments its all fun. Hope you get my explanation.

I could see the potential for a custom triggerhappy from the sharkticon mold but it would have to be a full repaint with wings added on to turn the boat into a jet.

As far as the boat mode as is, I kind of see potential for a Misfire repaint.

I thought he was a akward plane not a boat but either way your right. I gotta see if someone can customize mine. into at least that color scheme.

Misfire was an awkward plane, but his lack of wingspan makes him almost boat like. And now Takara is repainting the sharkticon mold as some kind of autobot "ark". 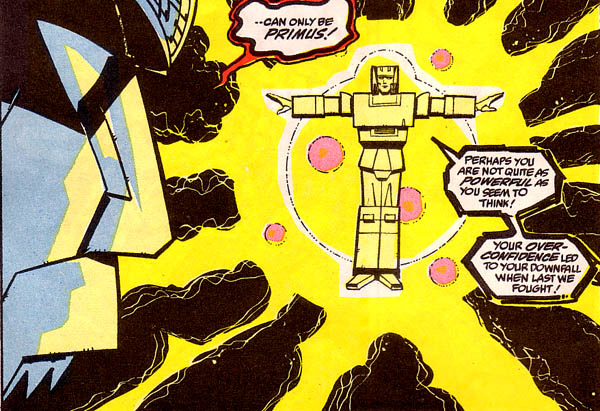