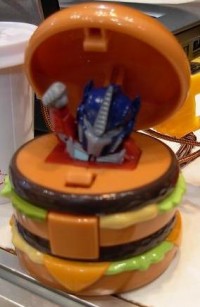 Japanese toy blog Mamegyorai have posted images of McDonald's themed Transformers toys from the Tokyo Toy Show. The images reveal an Optimus Prime/Big Mac, Bumblebee/frenchfries, and a drink is pictured to the left. The toys appears to have a jack in the box type gimmick. No further details at this time. Take a look at their mirrored image below.

Looks like Optimus and BB is becoming more desperate xP. Now they are disguising as food so Decepticon wont hunt them down lol

Yeah, it seems like a step down from the Food-Change-Ables of my youth. Still, I suddenly want these more than the "BoxMaster" KFC deal...and this furthers confusion over which fast food companies have the DOTM tie-in in which countries.

No way of knowing who's in the drink, unless that aircraft carrier at the end of ROTF actually was Broadside, and Bumblebee actually looks pretty cool with fry-wings. But what the heck's that round thing in the background? It almost looks like a tape-measure with 3 color-keys on it.

I wish the Prime inside was a little cooler but whatever.
Re: McDonald's Transformers: Prime Promotion? (1241935)
Posted by TulioDude on June 17th, 2011 @ 9:21pm CDT
Look again guys,it looks like they are Transformers Prime,not DOTM.
Re: McDonald's Transformers: Prime Promotion? (1241937)
Posted by Megazarak on June 17th, 2011 @ 9:27pm CDT
After looking at it again, this wouldn't be a DOTM promotion, it would be a Prime promotion, wouldn't it? That's definitely Prime Optimus and Bumblebee. Could this be Prime's first toys even before the actual figures come out? On the same note, I can't believe they're only coming out in December. I was sure the first wave (Arcee, BB, SS) and the Entertainment Pack would be out sooner than later as a sort of preview wave.

Re: McDonald's Transformers: Prime Promotion? (1241978)
Posted by El Duque on June 17th, 2011 @ 11:39pm CDT
Wow, a typo and mistook Prime designs for DOTM. I really shouldn't news stuff while under the influence of NyQuil.
Re: McDonald's Transformers: Prime Promotion? (1241988)
Posted by OptiMagnus on June 18th, 2011 @ 12:26am CDT
I remember back when you got a little action figure when the promotion was for an action figure brand...

my, things have changed.
Re: McDonald's Transformers: Prime Promotion? (1242011)
Posted by Supreme Convoy on June 18th, 2011 @ 3:15am CDT
It definitely reminds me of those old McDonalds toys.

These look cool. I'd be interested in owning some.
Re: McDonald's Transformers: Prime Promotion? (1242014)
Posted by slugfest200x on June 18th, 2011 @ 3:31am CDT
super-size? you ask me if I want to super-size?I'm pretty sure this is what those cities were referring to when they banned happy meal toys. lets stuff horrible food around re-occurring characters to get you to peddle our precious chump change into Americas proverbial smoking gun aimed at the consumer-ready youth. bang one down bang one down. megatron might not be a gun anymore but he still knows where to aim the ol' fusion cannon, eh boys an girls. i don't know why Hasbro hasn't licensed their own brand of morphine to go along with the awful movie verse. maybe i would at least get a bit of dopamine out of Optimus cramming every bit of an hour and a half of a Chevy commercial into bumblebee's "bug" side. nothing will ever bring back the innocence of childhood Hasbro, nothing. yeah i want it super-sized... lets hope these children just don't "choke" down more then they can chew.
Click here to view additional comments about this topic at the Energon Pub Forums ...