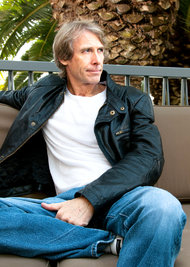 Fellow Seibertron member Superwheeljack has linked us to a revealing New York Times interview with Michael Bay and the future of Transformers, both movie number 4 and it's sequels. The article is mainly about his current film, Pain & Gain, due in theaters at the end of this month, plus a new TV series he's working on, but he spoke about Transformers in these quotes below:

Michael Bay was whispering these words to himself, mantra style, and biting his fingers as he perched at his computer like a bird of prey. On the second floor of his office in Santa Monica, he was holding a videoconference with artists at Industrial Light and Magic, the special-effects company, and something was bothering him.

As Mr. Bay watched ILM’s preliminary animation for his latest “Transformers” movie, blocky images of giant robots trading blows in the middle of a city, his visceral reactions, often with variations on the word “cool” — “That’s pretty cool”; “We can do something cooler”; “Maybe you could get a nice slice through his face” — seemed to signal approval.

In his career, Mr. Bay has had plenty to work with. Through action films like “Bad Boys” and “The Rock,” his man-versus-asteroid thriller “Armageddon” and three installments of “Transformers,” based on the Hasbro toys, he has become synonymous with the bigness of Hollywood movies: big budgets, big box-office returns, and big, big differences of opinion about whether they’re any good. To the extent that Mr. Bay acknowledges his own reviews, he says he is not striving for any artistic credibility he has somehow been denied. But he recognizes that sheer bigness becomes confining — an obstacle to making movies as rapidly as he wishes.

“When they get too big, it becomes un-fun,” he said. “You just see the money leaking away.”

But when you are Michael Bay, what does it mean to work small?

There is not much modesty to the Bay Films office, housed in a brick building that was once an auto-body shop. Today it teems with artifacts from his “Transformers” films, which have sold nearly $2.7 billion in tickets worldwide.

On the first “Transformers,” Mr. Bay said, he was chided by Steven Spielberg for allowing actors to improvise too much.

“Steven said to me, ‘Michael, I would like you to shoot something that’s in the script,’ ” he recalled. “And I was like, ‘Steven, this is how I work.’ ” Even if 80 percent of what he shot was terrible, Mr. Bay said, “You’re going to get 20 percent that’s gold.”

Since then, Mr. Bay said, Mr. Spielberg has come to see things his way. “Steven’s like: ‘You’ve got to have the funny. That’s part of the brand of ‘Transformers.’ ” (A spokesman for Mr. Spielberg confirmed Mr. Bay’s account of events.)

While success has reinforced Mr. Bay’s confidence, those who have known him over the years suggest that a certain directorial flair and a determination to prove himself have always been there.

When, at the end of “Pain & Gain,” Mr. Bay offered him a lead role in the next series of “Transformers” movies, Mr. Wahlberg said he accepted without hesitation.

“He said, ‘Well, let me tell you about the part and the story,’ ” Mr. Wahlberg recalled. “I said, ‘Dude, if you want to. Or you could just tell me where to stand and what to say.’ ”

Now that he has done “Pain & Gain,” Mr. Bay is hardly contemplating a transition into independent cinema. He is producing his movies and television pilots and feels a special attachment to “Transformers,” in part because it keeps him in an exclusive club of directors who are associated with continuing film franchises.

“Jim” (Cameron, of course) “is doing ‘Avatar,’ and Peter” (Jackson, naturally) “has been in Middle-earth for a long time,” Mr. Bay said. “I don’t know how many I’m going to do, but I’ve got to set this franchise up again for somebody.”

Then there is the Mr. Bay who just likes to hike and play softball, watches “Homeland” and considers himself a frustrated landscaper, and wonders if he could walk away from the apparatus he has built himself, if only temporarily.

“I want to chill out for a little bit,” after the next “Transformers,” he said hesitantly. “I think. Smell the flowers a little bit.”

With some wistfulness, he added: “I wish I would read more. I used to be a huge reader. It’s just — life gets too busy.”

To read the full, in depth article, click here.