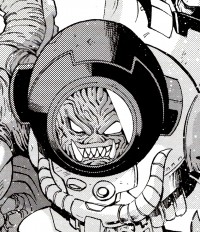 Our fellow Transformers fans over on the Allspark have translated Million Publishing's Transformers Generations 2012 Volume 1 "Tale of the Pretenders" comic. Click here to view all the translated pages.

ZOMG, that story is AWESOME!!!

I LOVED Masterforce and still rank it as my third favorite series (unless Rescue Bots manages to overthrow it). I always wanted to see material showing what the Cybertron Pretenders did during their time on Earth since the Neolithic era, and I'm pleased to see it's pretty much what I imagined: Them fighting the other Destron Pretenders.

Though, I've felt that it'd be cool for them to make a series of stories chronicling their adventures as they lived through various points in time and what they did during each. Like, them fighting Bludgeon in Feudal Japan, or fighting Stranglehold in Ancient Rome (you could sorta pass off his Pretender Shell as being a gladiator), or even some events that wouldn't involve the Destrons but had the Pretenders living among humans civilizations like the Middle Ages, the Old West (I can easily picture Lander getting into a fight that would have him getting thrown out of a saloon

), Ancient Greece, the Industrial Revolution, the Age of Exploration (one of the aquatic-based Destron Pretenders like Octopunch or Finback would fit here), the Renaissance, either of the World Wars, Or any other time and place.

- This story alone makes me want more of The Pretenders.
- It has me hope that the next offer is tied to this series.
- And it makes me feel like I'd be able to make things up when I missed out on the 2009 volumes.

Beyond that... I have no idea what to say besides the fact that I am hooked.