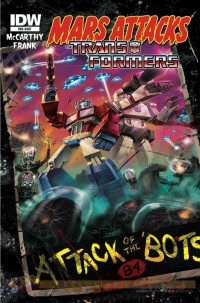 CBR sheds a little more light on the previously announced "Mars Attacks The Transformers" comic slated for release in January. Apparently those wacky ray gun wielding aliens won't just be attacking our beloved Transformers, but multiple franchises across the IDW universe in a series of one-shots. The Transformers installment will be written by "All Hail Megatron" scribe Shane McCarthy and drawn by Transformers veteran Matt Frank. Click here to read the full article on CBR. Check out the covers mirrored below.

The series will feature regular covers by Ray Dillon in a style inspired by the classic trading cards, but they'll also come with some surprising variants allowing Mars to attack a mix of well known creator-owned properties by top-notch artists like Mike Allred, J. Bone, John Byrne, Walt Simonson, Rob Guillory, Dave Sim and Terry Moore not to mention a few curveball property variants like Judge Dredd by Ray Dillon and Spike by Franco Urru. The publisher shared an exclusive first look at these variants with CBR.


Meantoy wrote:How about Transformers vs. Terminators/Skynet? Transformers vs. the Predators? The preds have the tech to come up with strong enough weps and gear to hunt them. Or better yet, Transformers vs. Aliens. The Aliens have the acid blood and numbers to cause a problem, also if its set on earth theres plenty of breeding stock for the xenos. Just my 2 cents on what i think could be epic stories if done correctly.

We are complete agreeal. I want to see xenomorphs go against TFs, that'd be awesome.
Re: More Details on "Mars Attacks the Transformers" (1430011)
Posted by Sabrblade on October 13th, 2012 @ 3:25pm CDT
Mars Attack Popeye = Ray guns vs. Spinach.

MINDVVIPE wrote:Dredd's underbite is scarier than all those other things combined.


Meantoy wrote:How about Transformers vs. Terminators/Skynet? Transformers vs. the Predators? The preds have the tech to come up with strong enough weps and gear to hunt them. Or better yet, Transformers vs. Aliens. The Aliens have the acid blood and numbers to cause a problem, also if its set on earth theres plenty of breeding stock for the xenos. Just my 2 cents on what i think could be epic stories if done correctly.

We are complete agreeal. I want to see xenomorphs go against TFs, that'd be awesome.

Better yet, BEAST WARS VS ALIENS!

The Beast Wars bots are part organic (I guess) so imagine a poor Maximal character is found hurt and is brought back into the base. When Primal and crew try to nurse him and interrogate him, BAM! CHESTBURSTER! A few days later, the Maximals are being killed and eaten one by one by something more horrible and more nightmarish than any Predacons ever.

I would seriously love to know how IDW's getting away with the printing of this, since I was under the impression that Dark Horse now had the rights to do Angel comics.
Re: More Details on "Mars Attacks the Transformers" (1430640)
Posted by Calvatron on October 15th, 2012 @ 2:04pm CDT

I would seriously love to know how IDW's getting away with the printing of this, since I was under the impression that Dark Horse now had the rights to do Angel comics.

I think a number of those covers are just bonus variant covers. Not all of the covers have credits for a writer and artist. They must either be paying licencing rights, or have some retro-active legal rights to do just a cover.
Re: More Details on "Mars Attacks the Transformers" (1431452)
Posted by El Duque on October 17th, 2012 @ 7:48pm CDT

San Diego, CA (October 17, 2012) – IDW Publishing regrets to inform you that this January, many of your most beloved characters are coming under attack. Vicious, bloodthirsty Martians have descended from the skies and crossed through infinite panels and dimensions seeking total comic book conquest! Batten down the hatches and assemble your militia, because 2013 is kicking off with MARS ATTACKS IDW!

Beginning in the first week of January, Topps’ terrifying Martian conquerors are infiltrating many of IDW’s prized titles in five weekly one-shots. It’s going to take guts, smarts, and the brute force of an unprecedented army of talented comics creators to fight them off!

“It seems natural for the Mars Attacks Martians to go on the offensive—attacking is right there in their title—and now we see that they’re just too out of control to keep their warlike ways confined to their own series,” said Chris Ryall, IDW’s Chief Creative Officer/Editor-in-Chief and strategic planner of this five-pronged invasion. “And as exciting as the weekly attack is going to be, I’m equally enthused about the insane cover variations going on with each issue. Read on and be amazed by the talent assembled to offer visual clues of what we’d be in for had the Martians attacked more than just five top IDW titles.”

Invasion alarms start sounding January 2, when MARS ATTACKS POPEYE. Martin Powell, Terry Beatty, and Tom Ziuko will team up to chronicle the Martians pulling into a port of pain to take on the spinach-enhanced sailorman. Fans can be certain it’ll be all hands on deck with a high wave advisory with the MARS ATTACKS POPEYE cover by Ray Dillon—all of Dillon’s covers will mimic the look of worn out trading cards, complete with back-cover text just like an old Mars Attacks card set—and retailer incentive covers of MARS ATTACKS MISS FURY by J. Bone and MARS ATTACKS OPUS by Berkeley Breathed!

January 9, the battlefront expands across time and space to the same 1970s New York City when MARS ATTACKS KISS, a twisted retelling of the very first Kiss comic book! Will the Martians’ hunger for otherworldly destruction be a match for the sheer force of rock n’ roll? Only Chris Ryall, Alan Robinson, and Tom Ziuko will have the answer! Featuring a cover by Ray Dillon and incentive covers of MARS ATTACKS JUDGE DREDD by Greg Staples and MARS ATTACKS THE STARSLAMMERS by Walter Simonson! The mighty leaders of the KISS Army are calling in the cavalry, and something tells us it’s not Doctor Love!

January 16, the Martian menace takes the fight to the world’s pre-eminent poltergeist punishers when MARS ATTACKS THE REAL GHOSTBUSTERS! When Martians invade, Erik Burnham and Jose Holder know just who they’re gonna call! Everyone knows Venkman, Stantz, Spengler, and Zeddemore ain’t afraid of no ghosts, but what about aliens? With a cover by Ray Dillon and incentive covers of MARS ATTACKS MADMAN by Michael and Laura Allred and MARS ATTACKS CHEW by Rob Guillory, the streams of comic book awesomeness are sure to be crossed!

January 23, the drums of war begin beating double-time when the Martian armada clashes with Cybertron’s finest when MARS ATTACKS THE TRANSFORMERS! Daring to take on Optimus Prime’s fearsome army, this epic battle of Martian versus machine will be chronicled by Shane McCarthy and Matt Frank with a cover by Ray Dillon! If that daring incursion wasn’t enough, this one-shot will also feature incentive covers of MARS ATTACKS STRANGERS IN PARADISE by Terry Moore and everyone’s favorite vampire antihero sharpening his teeth for MARS ATTACKS SPIKE by Franco Urru! That’s right, Angel fans, you get one last look at IDW’s version of Spike, thereby proving all the rules are meant to be broken in this insane weekly event!

January 30, just when the brawl for it all seems like it can’t get any bigger, MARS ATTACKS ZOMBIES VS. ROBOTS! Chris Ryall, Andy Kuhn, and John Rauch will be there to chronicle the titanic terror when the three battle-hardened armies collide! As the final blows for galactic supremacy are struck, they’ll be accompanied by a cover from Ray Dillon and incentive covers of MARS ATTACKS ROG-2000 by John Byrne and MARS ATTACKS CEREBUS, by Dave Sim!

This January, everything is on the line and fans of all callings are encouraged to sign up and do their part. The Green Menace from the Red Planet is attacking from all angles and no theater of war will go untread upon as MARS ATTACKS IDW!

Will you welcome our new Martian overlords, or will you take up arms with comics’ greatest heroes and give them the boot? Decide quickly-- saucers are en route!

Visit IDWPublishing.com to learn more about the company and its top-selling books. IDW can also be found at http://www.facebook.com/#!/idwpublishing and http://tumblr.idwpublishing.com/ and on Twitter at @idwpublishing.

IDW is an award-winning publisher of comic books, graphic novels and trade paperbacks, based in San Diego, California. Renowned for its diverse catalog of licensed and independent titles, IDW publishes some of the most successful and popular titles in the industry, including: Hasbro’s The TRANSFORMERS and G.I. JOE, Paramount’s Star Trek; HBO’s True Blood; the BBC’s DOCTOR WHO; Nickelodeon’s Teenage Mutant Ninja Turtles; Toho’s Godzilla; Wizards of the Coasts Magic: The Gathering and Dungeons & Dragons; and the Eisner-Award winning Locke & Key series, created by best-selling author Joe Hill and artist Gabriel Rodriguez. IDW is also home to the Library of American Comics imprint, which publishes classic comic reprints, and Yoe! Books, a partnership with Yoe! Studio.

IDW’s critically- and fan-acclaimed series are continually moving into new mediums. Currently, Jerry Bruckheimer Films and Disney are creating a feature film based on World War Robot, while Michael Bay‘s Platinum Dunes and Sony are bringing Zombies vs. Robots to film.

Goodbye? But Action Comics just got relauched in 2011. President-prime wrote:I don't mean dc's action comics. I meant comics that have lots of serious action with jokes but not comics that are jokes:)

...ASIDE from the fact that Shane McCarthy's writing it.

Just because it isn't "oh so serious" doesn't mean it's gonna be some juvenile piece of crud.
Re: More Details on "Mars Attacks the Transformers" (1432318)
Posted by President-prime on October 20th, 2012 @ 12:12am CDT
I'm sure it'll probably be interesting for those who likes these kinds of crossover. But I have to agree with many of the posts thus far. Personally, I think there are other worthwhile properties to do crossovers.
Click here to view additional comments about this topic at the Energon Pub Forums ...