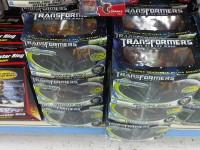 More DOTM Cyberverse figures are infiltrating Wal-Mart toy aisles in Florida! Back in March our own Lord Onixprime stumbled across Topspin, Skidz, Bumblebee, Crankcase and Sideswipe at his local Wal-Mart in Florida. Yesterday TFW2005 member Toyzaremine discovered a couple Cyberverse playests, Bumblebee With Mobile Battle Bunker and Starscream Orbital Assault Carrier, also at a Florida Wal-Mart for $14.95 each. You Seibertronians who reside in The Sunshine State might want to venture into the toy department next time you're in your local Wal-Mart.

What the Eff? Not that I'm complaining, but I need a minute to heal my wallet from all the wounds inflicted by HFTD, Generations, and RTS stuff before the movie stuff starts rolling out. This will not make my wife happy at all...lol