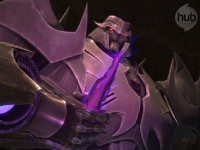 German geek blog Starblight.de has posted a new update concerning the German DVD releases of Transformers Prime by Edel:Kids.
Just recently volumes 1 and 2 have been released for € 9.99 each and new we have confirmation of more volumes. Not just that but there will also be a full season box set collecting all of Season 1 on DVD and Blue-Ray!


That is however not all there is to say, Starblight is taking fan feedback and requests concerning the full season Box set which they intend to forward to Edel:Kids, so you can (if you're interested that is) possibly help shape the set.

You can click here to see the original posting over at Starblight.

The thing about the fan feedback is pretty cool, but probably nothing more than wishful thinking, but then again the guys who made the Armada box sets did let the fans decide on the content and the box design itself, so who knows?

So... this is why Grimlock wait for the Blu Ray Box Set. Me hope that amazon.de will ship it to Dinobot Island then.

Season 2 is a little bit weak at the moment. Nothing important for story happened in 9 of the first 12 new episodes and there still no Dinobots or Combiners and where the heck is Wheeljack again? He's vanished since Episode 6 - Loose Cannon's.