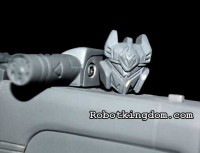 Another update from our awesome site sponsor RobotKingdom, gives us another look at a nifty third party item. Soundwave has taken the form of many modern hand-held items, now it's his time to try being a recorder! Made by the company BTS, we've got more images of the popular Decepticon, albeit in prototype form. Armed to the teeth, and certainly takes after Soundwave, be sure to put your pre-orders in at RobotKingdom.com, if you're interested. Check out the new stuff below!

Blurrz wrote:now it's his time to try being a camcorder

The proportions on this guy are way off. Elbows are two high and he either has no knees or they're right under his bum.

I've got to agree with CP here, it's not good enough. The bar is set pretty high with third party companies these days and I don't believe there is room for all of them to start making their own figures. Maybe BTS should stick to weapon sets, their last one was pretty cool.
Re: More Images of BTS-04 Sonicron (1202013)
Posted by bvzxa on March 29th, 2011 @ 12:13pm CDT
I like it so far. A little different, but I like it .
Click here to view additional comments about this topic at the Energon Pub Forums ...