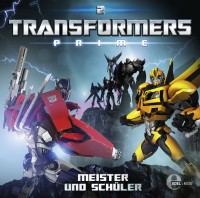 The German nerd blog Starblight.de has receaived some more information regarding the Edel:Kids DVD releases of Transformers Prime we reported a while ago.
The article confirms that the DVDs will in fact contain the original English language soundtrack or dub and reveales that Edel:Kids will also release CDs of Prime.
The CDs are audio plays and judging by their titles they are adaptations of the episodes found on the DVDs.
You can click here or any of the following images, which are the DVD and CD covers, to view the original posting in German.
The DVDs:
Vol1 Die Dunkle Macht erhebt sich (Darkness Rising), contains all five parts of the pilot