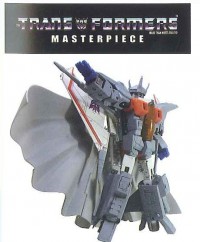 Site sponsor Kapow Toys has listed a pre-order with images of the recently discovered MP-11 Starscream set. Unlike MP-10 Convoy Version 2.0 this does not appear to be a new figure, rather a reuse of the previous Masterpiece Starscream mold with possible remolding, new coronation accessories, and a holographic pilot. The figure is priced a £139.99 (approx $220) and scheduled to release in 2012.

Ravage XK wrote:Legs/feet are different. Looks like he may have supports behind the thruster parts of his feet.

DevastaTTor wrote:I'm not too sure about this. If the picture on Kapow is accurate (which I question), then the cape looks strange to me and it doesn't look like the feet have ankle joints.

And then there's cost-it's 139 euros, that's going to be about 200 dollars. And that, unless this turns out to be an amazing new figure, means a big pass by me.

DevastaTTor wrote:I'm not too sure about this. If the picture on Kapow is accurate (which I question), then the cape looks strange to me and it doesn't look like the feet have ankle joints.

And then there's cost-it's 139 euros, that's going to be about 200 dollars. And that, unless this turns out to be an amazing new figure, means a big pass by me.

Re: MP-11A Revealed (1303007)
Posted by Ravage XK on October 20th, 2011 @ 8:42am CDT
The more I think about it the angrier I get, thats nearly twice the price it should be. Im sure the old seekers were about £80 to the UK. Its a rip off.
Re: MP-11A Revealed (1303010)
Posted by Lapse Of Reason on October 20th, 2011 @ 8:48am CDT
Not impressed. For that price (if accurate) I'll stick with what I have.
Re: MP-11A Revealed (1303011)
Posted by Motorthing on October 20th, 2011 @ 8:49am CDT
Totally and utterly pointless. We get few enough of these things and to blow a slot on this is pretty unforgivable. I already have all the MP Starscream I'm ever going to need. And Skywarp, and Thundercracker and I never cared enough about the coneheads to want to spend MP money on them so enough is definitely enough.

Somewhere Waylon Smithers is shouting and pointing "but he has a new hat.....!!!"

New characters only Hastak or you don't get my money from now on.
Re: MP-11A Revealed (1303018)
Posted by Swindle01 on October 20th, 2011 @ 9:04am CDT
what a massive waste of time and money and resources, utter shit! serious pass! ffs why release something thats ALREADY out? your can get the igear starscream and the coronation kit for cheaper than this

Re: MP-11A Revealed (1303027)
Posted by alternator77 on October 20th, 2011 @ 9:26am CDT
a few thoughts on this
the bad
1)im really dissapointed with this personally
2)for 200 bucks i expect more sorry takara
3)its looking more and more like a magnus will be at least 3-400 dollars the way these are priced.
the good
1)if it is a remold then it gives those who dont have tc a chance to get an official trio of seekers albeit for nosebleed prices
2)if they rethink the pricing this would possibly shut igear out of the picture(not completely)
3)a slight bit of hope that theyll do the coneheads because thats all i want.

the really bad another 30-40 threads about this mp

all in all takara has saved me a buttload of money

I'll post pics later.
Re: MP-11A Revealed (1303030)
Posted by Prime Evil on October 20th, 2011 @ 9:33am CDT
*sigh*
This should have been done the FIRST TIME. I would have bought this back in the day, even at $200, but I really cannot justify the cost for this. IDK, I love Screamer, but in this day and age of financial hardship, it's pick and choose and I don't think I can choose this as much as I want to, especially for a figure I basically have already.

This new price point for the MP line is even lamer than the unnecessary reboot. Are these stupid accessories supposed to make up the more than $100 difference of the previous versions? They're not doing a very good job answering iGear's bell by putting out similar product for twice the price...
Click here to view additional comments about this topic at the Energon Pub Forums ...