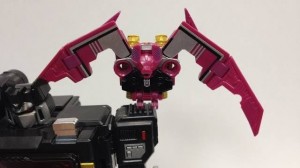 YouTube reviewer Peaugh has posted a 1080p/full HD video review of Masterpiece Soundblaster's companion cassette, Ratbat. Thanks to the Hasbro release of Masterpiece Soundwave, many collectors have been bitten by the cassette collecting bug due to all of them being packed in with Soundwave, and Ratbat's no exception, but with him being available only with a high priced foreign repaint, he's somewhat out of reach for many. Before you go and spend the money, find out if Ratbat's as good as the previous releases and worth the dough.

You can see our full galleries of Masterpiece Soundwave, Soundblaster and Ratbat by clicking on their hyperlinked names.

We've embedded the video below:

durroth wrote:I love how he says what we're all thinking and calls Soundblaster one of Ratbat's accessories

SO true. Though I think the Soundblaster deco is cool, you know that hardly anyone (outside of Japan, anyway) is buying this for him alone. I think that's why they had to include Ratbat with him and him alone, so they could sell Soundblaster.