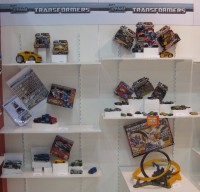 The website for Hunt for the Deceptions (HTFD for short), which we reported here has a section called "Official Rules", which as the name suggests gives you the rules of this promotional game.
The rules give you the names of HFTD products from which you can get the special codes you need to play the game. And amongst these names are names of currently unknown products.

These are the new names:

First off the ones that seem to be a new sub-line like Powercore Combiners and these seem to be the mysterious new line of products of vehicles that convert into "Battlemodes" these where first seen at ToyFair 2010 Australia and reported by Ozformers.


Now the following ones seem to be Robot Powered Machines (RPMs for short) sets.


Stay tuned to seibertron.com for all your Transformers related news!