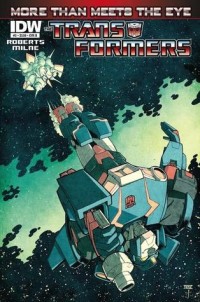 Amazon.com has a couple new preorders for you Transformers trade paper back readers. A little something something for old and new fans alike.

Up first for you old school fans is the Transformers Classics Volume 4. This is scheduled for release by IDW Publishing on November 6, 2012 for $24.99 and written by Bob Budiansky, Ralph Macchio and other various authors.

The historic comic book roots of The Transformers are re-presented for maximum Cybertronian enjoyment. Collecting issues #39-50, rejoin The Autobots and The Decepticons as their war stretches across the cosmos. Freshly re-mastered and re-colored, these stories are accompanied by an in-depth introduction as well as select issue notes by Mark W. Bellomo.

Next up is something a little newer for fans of the more recent Transformers comics. Transformers: More Than Meets The Eye Volume 2 is also scheduled for release by IDW Publishing November 6 for $19.99 created by James Roberts, Alex Milne and Nick Roche.

Ratchet, Hot Rod, The Decepticon Justice Division, and Grimlock all take turns on the center stage as the war between the Autobots and the Decepticons transitions into a new phase.