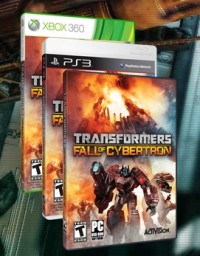 We now have confirmation that Fall Of Cybertron is available through pre-order.

Not only that, but we have confirmation of downloadable content! (DLC) The G1 Retro Pack!

We also have confirmation of the pricing and options to obtain the game.
Price is $59.99
Activision's own personal download site
Steam
And retail locations such as Gamestop, and Wal-Mart and the like.

More info in the blurb below, found at this site:

In a pressing question on when is the PC going to be able to pre-order the game? Well High Moon answered that on their twitter feed this morning. Apparently the PC version will be available for pre-order this week on Steam! Also, with this pre-order you will get the G1 Retro Pack. If you dont know what that is then you can find out all the information you need here. Pretty awesome if you ask me.

EDIT: So HMS tweeted my personal account confirming that FoC will be available for pre-order this week on the PC on Steam. The official website has the PC version being listed at the major retailers plus Activision's download website and Steam. HMS also used their Steam forums account to post on the forum, and has led us to believe that it will be posted on Steam for pre-order sometime today or tomorrow. Will update again when it's confirmed in the store.

Keep your optics tuned to Seibertron.com for the latest news and updates!