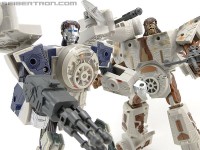 The Millennium Falcon might be able to make the Kessel Run in less than twelve parsecs, but there's one thing it might not be able to outrun, gold plastic syndrome. That's right, the dreaded affliction known as GPS apparently didn't end with the RID KB exclusive Megabolt. Chewbacca experienced a nasty shattered knee during the photo shoot. The robots are really good too, they each capture the character very well. Chewbacca has molded fur, and his bandolier, along with a great face sculpt. Han has his headset, and oozes smuggler cool.

Sad to see the broken knee, haven't had trouble with mine but now I'm worried. Plenty of incomplete ones on eBay cheap for a quick repair tho. Lastly- great pics as always.

Megatron Wolf wrote:I have Grievous and its a cool figure looks good in both modes and has a fare amount of articulation. Only problem with it is the back kibble, gets in the way and makes it back heavy. I want the Magna Guard but i could never find it and still cant find it. Even if i were to find it i dont know if id want to pay close to $17 for it. Still pissed that they got rid of the pilot figures, they were a cool little addition. And are these still considered part of the micromachine line? I remember the first few waves were but after that the name & emblem were removed from the figures along with the pilots.

i could've sworn on the bottom of the bubble of the original ones it had the micromachine logo. It would make sense since the pilot figures and alt modes are just like the ones from the MM line back in the day.

Jokes aside, i sorta do like the ingenuity of the combing Falcon and it looks good too. I'm really tempted to pick that up. I really think it's due to the photographs that are playin tricks with me though. Cause i HATE SW/TF crossover nonsense but this release has me second thinking that.

The Transformers ride the Star wars prequels joining with the Star Wars characters as motor-masters, head masters and target masters. Now you have Transformers merged with the force. When the Jedi are betrayed the Autobots fall and are thrown to the winds. Unicron enters the Universe to merge with Emperor to become the new Death Star. Megatron is fused with Darth Vader and is enslaved with the Deceptacons to serve Unicron. While Prime is missing.

It's one of those figures I was happy to get as a gift, because I never would have bought it on my own. And it's pretty damn cool, too.