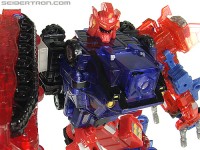 So the day is finally there that the Seibertron.com galleries can show you the complete combiner set members of the official Transformers Collectors Club got for free: The Autobot combiner team that's made up of robots from different factions from different universes and toy lines, yea.

First off we have Heatwave for ya, Heatwave is a Decepticon from the Shattered Glass continuity. Heatwave being a Heroic Decepticon does heroic things, like chopping off heads of non-threatening hamster shaped fun park attractions with a sword his toy totally doesn't have, also he talks to non-sentient machines. He was the fifth and final free member exclusive needed to create a very special combiner, a combiner with a hilarious name and made with a lot of translucent plastic. Now here we have the main event! the completed combiner, with the name of Nexus Maximus, if you go by the toys name, or Nexus Prime, if you go by the name given to him by fiction. Why does he have two different names? Well Funpub gave Hasbro two possible names for their combiner, Nexus Prime and Maximus Prime, Hasbro should chose which one was going to be taken. Well Hasbro is very protective when it gets to the word "Prime", and decided to not allow FunPub to use it and suggested to combine the non Prime parts of the names and call him Nexus Maximus. Now there are two things that are really silly about this, the first is the fact that Hasbro had already green-lit the story in which the combiner was revealed to be one of the Original 13 and therefore a Prime, and the other , ...well the name was already taken by a different type of toy - one you have to be at least 18 years old to buy it. But then Funpub just went ahead and called him Nexus Prime in the comics instead of using the awesome toys name. So there you have it, Nexus Prime is finally complete, and if you want a collection of the Original 13 Transformers, well you need this guy and you'll have to dig deep as after-market Prices for all five of these guys are, well pretty hefty.

And if you want to check out the complete team, just click the following names to get to their galleries:
Landquake
Breakaway
Skyfall
Topspin

And you can click here to find even more Convention and Club exclusives!

i know, but what about Shadow Scyther? SG Rodimus and Gentei Wildrider are alot more appealing to upgrade than this combiner.