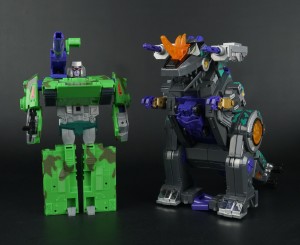 Today we bring you some more gallery-tastic content on Seibertron.com, and we move over to Beast Wars II for a look at the Predacon Duke of Destruction, brother of Galvatron, and his later upgrade - Megastorm and Gigastorm, with Gigascouter! Part of the Ultra class of the line, Megastorm is a redeco of the G2 Megatron tank toy, the version here being the one from Showdown of Artillery: Apache vs Megastorm box set; the upgraded Arch-Duke of Destruction featuring the Full Tilt redeco into Gigascouter, on the other hand, is the Cyborg Beast Supreme class Trypticon repurposing, with new added nose horn.

Check out the galleries by clicking on any of the images below, and stay tuned for more Trypticon related content coming soon! 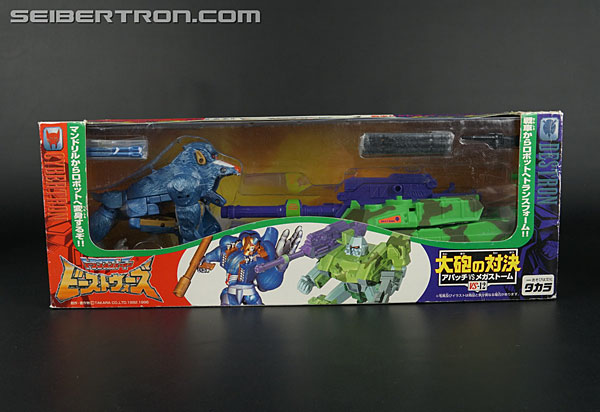 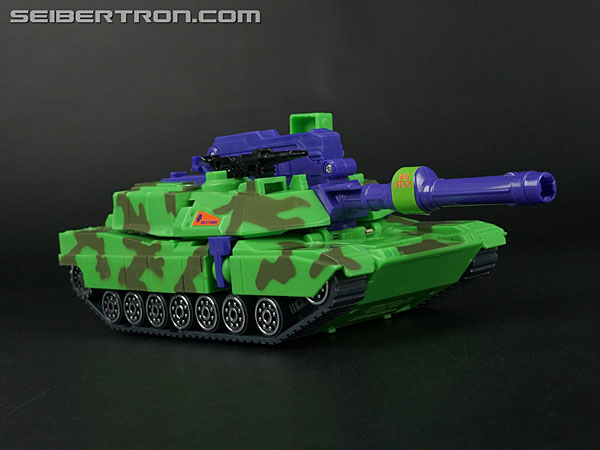 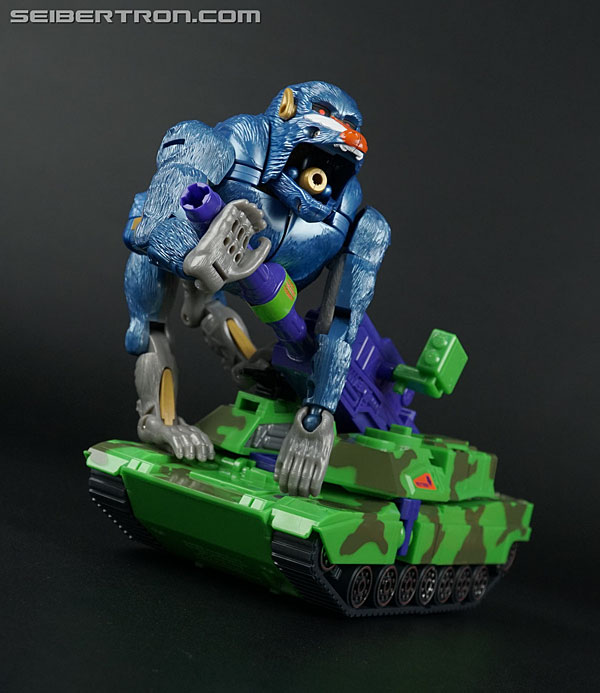 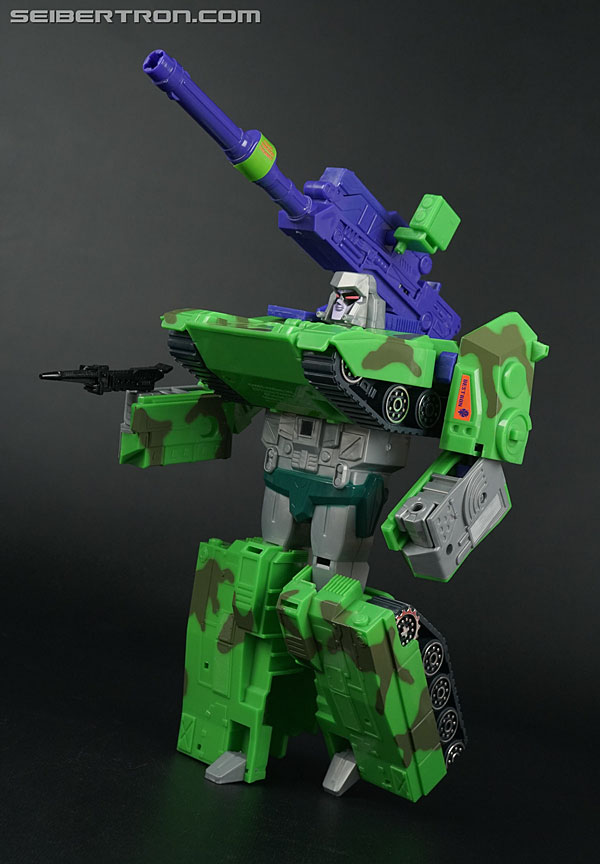 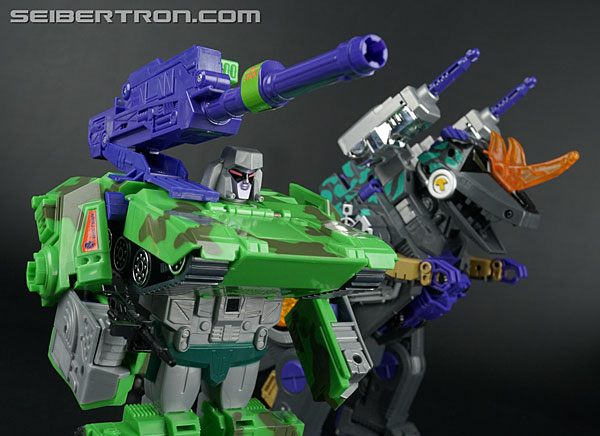 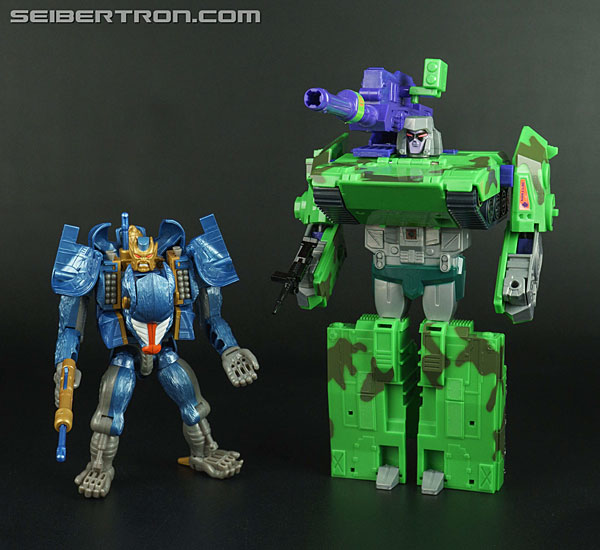 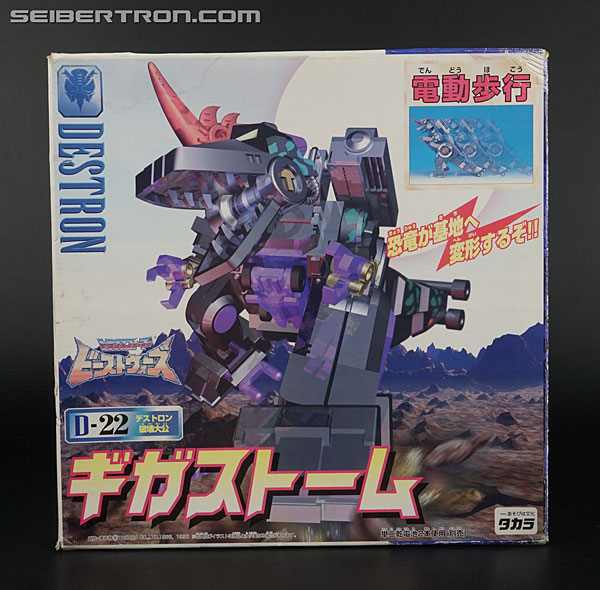 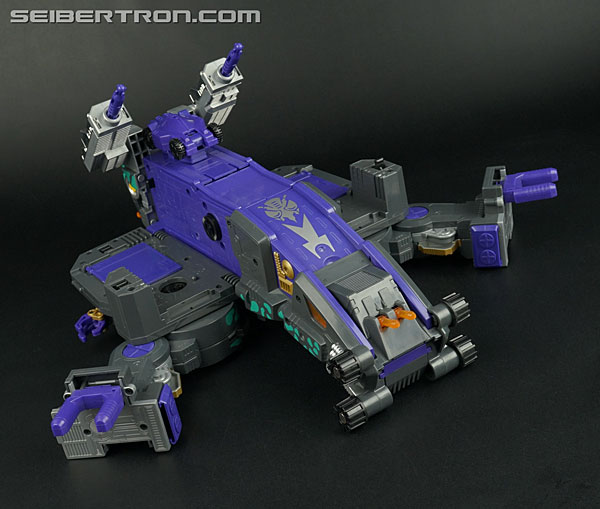 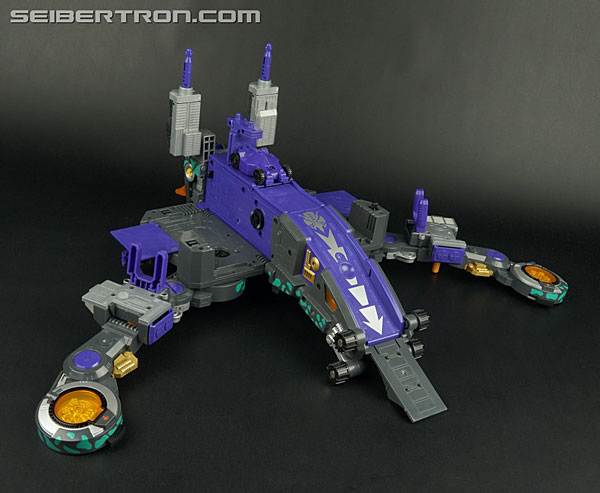 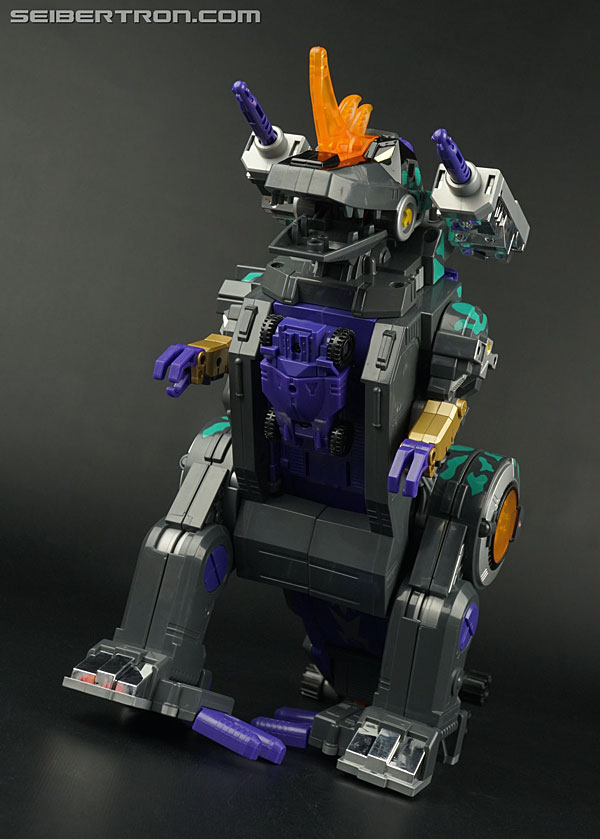 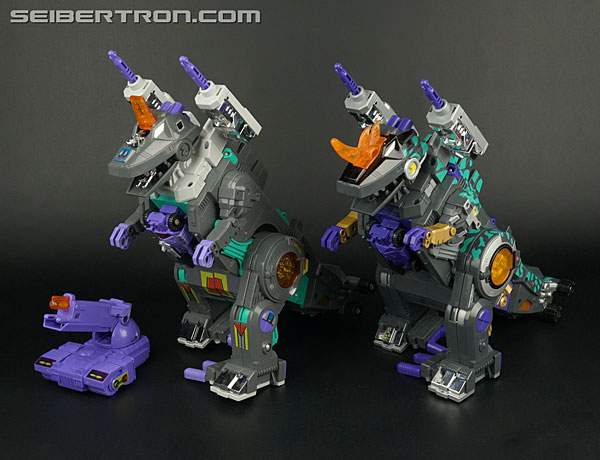 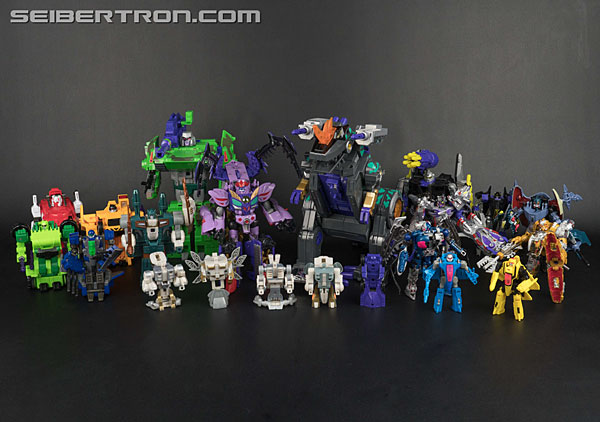 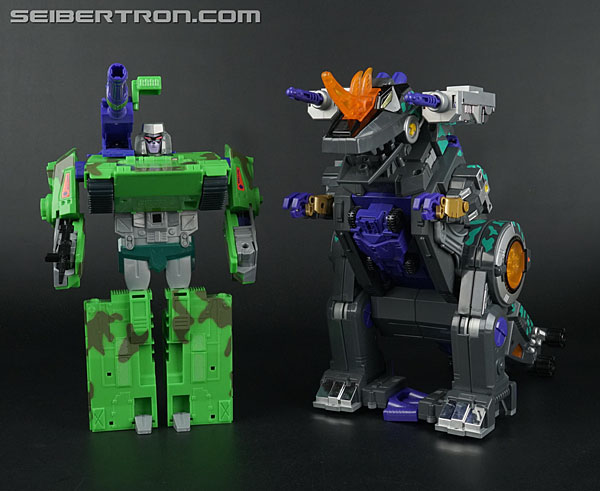 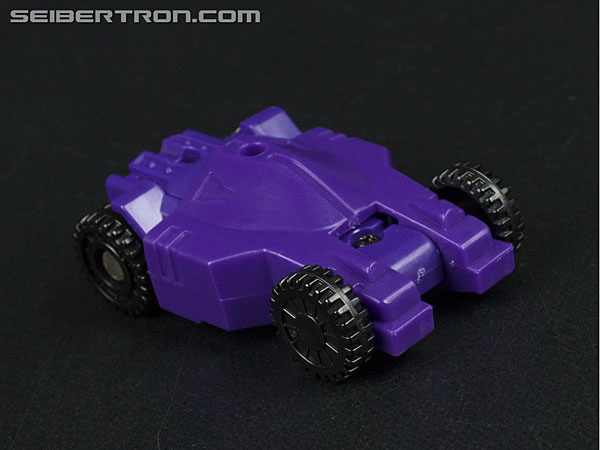 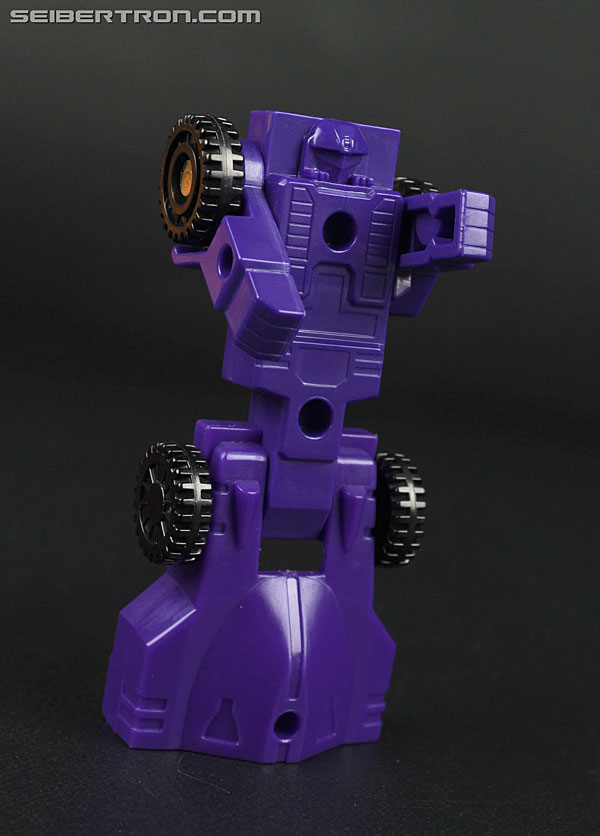 I always wished that Takara would have done a release of Megastorm retooled from the smaller, more articulated Hero Megatron mold so that he could scale better with the rest of his team instead of towering over all of them, as he was only the second-tallest Predacon in the show, second only to Galvatron in height (who himself was bigger than everyone else but not too much bigger).

Now, that all changed when he became Gigastorm, as by then he did supersede everyone's height, with only Magnaboss and Galvatron's dragon mode able to come near to his height.

In fact, because Gigastorm was so big, the cartoon actually made one of the very first uses of an official in-universe explanation for size-changing, years before Dreamwave or IDW would come up with the "mass-shifting", "parts compression", and "mass-displacement" explanations. In the show, Gigastorm had become so big that he could no longer fit inside the Predacon's fortress mothership. In order to make him fit inside, he would have be subjected to an "Elemental Particle Control Beam", fired at him by the ship, which would shrink him down to a more manageable size (roughly the same height as his brother). The effects of this beam would seemingly remain indefinite, or at least until he'd leave the ship. Whenever he'd be seen back outside the ship, he always be back to his original size, but we were never shown him actually regaining that size onscreen. We can only speculate that the effects either wore off whenever he left the ship, or were reversed by another size-changing method that he needed to be subjected to upon leaving the ship.

Though, one time, in an episode where Gigastorm finally made his ambitions to overthrow Galvatron known to his brother, as he and Galvatron fought each other, Galvatron punished Gigastorm for his treasonous behavior by subjecting him to a much greater dose of the Elemental Particle Control Beam, which shrunk Gigastorm down all the way to toy size. Galvatron picked up his pint-sized brother and starting pulling on his limbs and tail like how a child would improperly play with a toy, as part of further punishing Gigastorm. He was back to his normal height by the next episode, though, evidently having suffered enough punishment to fall back in line under Galvatron's thumb.

Va'al wrote:the upgraded Arch-Duke of Destruction featuring the Full Tilt redeco into Gigascouter, on the other hand, is the Cyborg Beast Supreme class Trypticon repurposing, with new added nose horn.

I recently learned that Gigastorm being a Cyborg Beast is a bit of a misnomer. Though he played a role in upgrading the Combatrons into the Cyborg Beasts, it turns out that he wasn't a Cyborg Beast himself in the original Japanese fiction. Only in the IDW Beast Wars Sourcebook was he declared a Cyborg Beast (or "Cyber Beast", as the Sourcebook called them), based on the longstanding (but mistaken) fan belief that he too was one of them.
Re: New Galleries: Transformers Beast Wars II Megastorm, Gigastorm and Gigascouter (1907477)
Posted by dragons on August 30th, 2017 @ 9:36am CDT
Megatron is almost same size as gigtron never had him to know how big he was good scale comparison