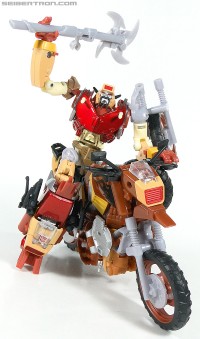 Wreck-Gar is a pass though. For a character that lives in junk, the muted tones of the Hasbro version just make more sense, for me.

Oh BTW Stixx, you misspelled too, there is an extra O.

Just poking fun at ya man.

Stixx wrote:Very Nice. United Tracks Looks so Much better than the Hasbro Version. By the way El Duque, you spelled Bumblebee wrong on the first paragraph, you forgot an e. Great galleries as always, But I still prefer the Hasbro Version on Wreck Gar, he looks to cream colored on that one.

Optimum Supreme wrote:That Bumblebee is just screaming out for a Goldbug replacement head.

Agreed, and I figure this is something we'll probably see before long. Although with the amount of mileage this mould has had over the last 4 or 5 years it would be nice if we didn't have to go the 3rd part route to get our Cliffjumpers and Goldbugs up to scratch, A head remould surely wouldn't break the bank for Hasbro/TT and would have a lot of collectors that pass on 'just' a repaint thinking again about picking up a better representation of the characters.
Re: New Galleries: United Wreck-Gar, Tracks, and Bumblebee (1210228)
Posted by funklizard on April 17th, 2011 @ 2:00am CDT
Loving the United figures.

Tracks is simply outstanding. He would have looked better than the Hasbro RTS version even without the metallic paint job. But with it... Wow. Very glad I got this one. (Not that I've even seen RTS Tracks in stores here. Ahem.)

I'm digging the metallic paint on all the United figures. In fact, I'd love to see more molds from the Henkei lineup get this treatment. (Especially Voyager Optimus Prime. And Jetfire with metallic red paint.) I do hope that United is just on hiatus rather than finished. The world needs a Warpath with metallic maroon paint. (And I still want a Cliffjumper from the Classic Bumblebee mold with a proper head. And metallic paint.)
Re: New Galleries: United Wreck-Gar, Tracks, and Bumblebee (1210260)
Posted by OlivusPrime on April 17th, 2011 @ 5:21am CDT
I really don't like the colouring on Bumblebee. Tracks is the best of the three, although I'm impressed by how Hasbro has managed to compete fiercely with Takara in this line. Half of the Hasbro versions look better, especially Wheeljack and Perceptor.
Re: New Galleries: United Wreck-Gar, Tracks, and Bumblebee (1210413)
Posted by El Duque on April 17th, 2011 @ 3:50pm CDT
I don't typically import the Takara versions of figures I can get domestically, but I actually have all three of these. I got Tracks because I prefer the flame deco and the shiny blue paint enhances his sports car alt mode. I got Wreck-Gar just to leave in alt mode for my RtS Wreck-Gar to ride, that way there is a little more contrast between rider and bike. Lastly I got BB to either represent G2 Bumblebee with my neo-G2 figures, or become Goldbug if anyone ever does a head upgrade for him.
Re: New Galleries: United Wreck-Gar, Tracks, and Bumblebee (1210465)
Posted by Rated X on April 17th, 2011 @ 7:13pm CDT
Im sorry to say but Takara Wreck Gar is so much better. I see everyone talking smack about him, but the colors are so much more G1. Especially the reddish orange chest plate without the kiddie flames which were never part of wreck gar's cartoon paint scheme. OK the face is silver...who cares ??? It just looks all around better to me.
Re: New Galleries: United Wreck-Gar, Tracks, and Bumblebee (1210681)
Posted by Seibertron on April 18th, 2011 @ 11:44am CDT
I prefer the Hasbro versions of all 3 of these figures. I'm not a fan of this shiny paint Takara Tomy uses that damages/chips very easily or simply has flaws in it. Just about every Takara Tomy figure I own from the past year or two has problems/flaws thanks to this shiny paint.

Hasbro's blue plastic used on Tracks is a closer blue to the original than the dark blue paint Takara Tomy used. Yes, I do prefer the flame pattern used on Tracks better than Hasbro's, but since it doesn't show in robot mode, I'm pretty indifferent to it because Tracks won't be in car mode a whole lot. And check out that lovely paint flaw on the top left hand side of the flame paint scheme in the blue paint on Tracks' hood.

I like this version of Bumblebee, but only as a special edition type of figure. I basically only got it because I own every other version of this mold so I was able to do some nice comparison shot photos with all 7 of this mold, and because it fits in with the Animated gold painted Bumblebee. The gold paint on the figure, I'd prefer to go without once again.

As for Wreck-Gar -- the Hasbro version wins hands down with me. I like having both, just like I like having both versions of Scourge for the sake of troop building, but the Hasbro version will be Wreck-Gar in my collection. There are already some paint flaws in the red paint on Wreck-Gar. The light cream color isn't my thing and the silver face is way off on a figure in a toy line that tries to be very faithful to the original concepts.

The Hasbro versions will remain more durable through the years. As a collector who dumps a ton of money into this stuff, I prefer to have something that will last than something that needs to be handled very delicately. United Jazz is probably the only figure that I prefer the Takara Tomy version over the Hasbro version from the past two years.
Re: New Galleries: United Wreck-Gar, Tracks, and Bumblebee (1210845)
Posted by SKYWARPED_128 on April 18th, 2011 @ 8:07pm CDT
I have to say that United Bumblebee is much better looking than the Hasbro version. While the gold paint is a little on the gaudy side, his limbs are a nice dark gray instead of Generations version's shiny black. The uncolored clear headlights also add some realism to the fig. I also prefer a clearly visible Autobot symbol rather than the rub signs.
Click here to view additional comments about this topic at the Energon Pub Forums ...