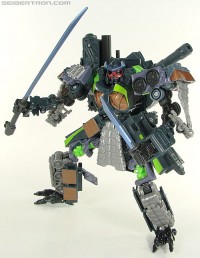 The illustrious toy galleries of Seibertron.com are back in full fashion after the fun of BotCon 2010. We're primed to give you the closest 360° look at upcoming Hunt For The Decepticons, Generations and Power Core Combiners toys. To start it all off, we've got one of the heavy hitters of the upcoming HFTD toy line. No longer is he a boat, drinking Santana champ, cause it's so crisp - now Banzai-Tron takes the form of a military tank. A heavy repaint of Voyager Bludgeon, this figure captures the color scheme and likeness of G1 Banzai-Tron. This sword wielder is a Voyager Wave 2 release, so expect it to hit your local shelves in the near future. For now, check out our gallery of Banzai-Tron in the links and pictures below! Keep it at Seibertron.com for more high-res galleries and the fastest Transformers news on the net!

Posted 2 days ago
News Categories: Toy News, Movie Related News, Cartoon News, Comic Book News, Site News, Rumors, Event News, Digital Media News, Collectables, Game News, Sponsor News, Site Articles, Store News, Company News, People News, Press Releases, Sightings, Reviews, Unlicensed Products News, Auctions, Transtopia, Interviews, Knock Offs, Collector's Club News, Editorials, Heavy Metal War, Podcast, Contests, Book News, Top Lists
Click here to post your comment about this news story!
Re: New HFTD Gallery: Banzai-Tron (1095491)
Posted by Megazarak on July 8th, 2010 @ 1:54pm CDT
Both Banzai-Tron and Bludgeon look really cool, but I like the way that Banzai has 2 distinct colours on his sword (among other things). I'll definitely pick this guy up.
Re: New HFTD Gallery: Banzai-Tron (1095518)
Posted by Evil_the_Nub on July 8th, 2010 @ 3:14pm CDT
I usually don't go for repaints, especially after I had to replace the original's sword with a dowel rod I shaped into a sword because the original is basically a spaghetti noodle with a cannon barrel on the end. But that has a nice ghostly look to it and I can't resist anything undead related.
Re: New HFTD Gallery: Banzai-Tron (1095523)
Posted by Tigertrack on July 8th, 2010 @ 3:27pm CDT
Banzai-tron may be my last movie toy purchase...ever.
Re: New HFTD Gallery: Banzai-Tron (1095557)
Posted by gothsaurus on July 8th, 2010 @ 5:19pm CDT
Yeah, I wouldn't worry about it "being a part of the movie line." Hasbro slips in an odd classic character in the active line where they can... thanks for that. Sometimes you have to ignore the packaging or the name.

It's a great sculpt and well-thought-out repaint with a very different look. I'll be making an exception to pick him up.
Re: New HFTD Gallery: Banzai-Tron (1095617)
Posted by Doctor McGrath on July 8th, 2010 @ 9:32pm CDT
I don't know what to do about this guy. He looks solid but the robot mode just screams Bludgeon. I may get him and just leave him in alt mode. But then I dont know what I'll do with my voyager Budgeon when Headrobots releases their new headsculpt for the deluxe.. lol
Re: New HFTD Gallery: Banzai-Tron (1095698)
Posted by Stockade on July 9th, 2010 @ 5:25am CDT
DAMN! This looks good even though i swore to myself no more repaints after the ROTF line and here it is i'm drooling over this one and bought Payload as a G2 homage. This one i could use a shadow warrior type assassin against the Autobots and the actual Bludgeon figure go into the classics line up.

When should Banzaitron be released?
Re: New HFTD Gallery: Banzai-Tron (1095704)
Posted by Flux Convoy on July 9th, 2010 @ 5:45am CDT
I really dig the colors used on this guy. You just can't really top the Botcon version though. It just fits better IMO. Big up to Hasbro for doing it though. He looks great.

Blurrz wrote:Oh come on, no one's got my I'm On A Boat reference?

Blurrz wrote:Oh come on, no one's got my I'm On A Boat reference?

I got it, I just didn't care

Re: New HFTD Gallery: Banzai-Tron (1096074)
Posted by DevastaTTor on July 9th, 2010 @ 7:39pm CDT
I really do like this better than the original. Bludgeon may find himself cast off the display shelf in lieu of Banzai-tron.
Click here to view additional comments about this topic at the Energon Pub Forums ...