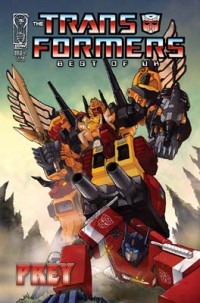 Seibertron.com member Real Devastator has stumbled upon two new Transformers comic series that have been announced by idw, the current holder of the Transformers comic license. Just click the covers to get to their pages on idw site!
The first is a return to the 80's, as Transformers: Best of the UK returns with the storyline Prey.

The Best of the UK series returns with the five-part Prey! MEGATRON unleashes the feared PREDACONS to seek and destroy OPTIMUS PRIME. Could this be the end for the Autobot leader? Find out in this fan-favorite collection of classic tales from across the pond, written by TRANSFORMERS mainstay Simon Furman with an all-new cover by Andrew Griffith!

The other one is set in the Movie universe with the title Transformers Revenge of the Fallen: Tales of the Fallen.

Nearly two years after saving the planet, Sam Witwicky has grown up. It's too bad his friend BUMBLEBEE hasn’t. With their friendship strained, Sam sets out for an evening devoid of alien interference. Little does he know that he's being watched. Without his robotic protector, can he beat the DECEPTICONS?