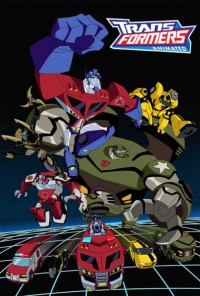 Sabrblade of our forums has kindly pointed out to us new information on Transformers Animated's Japanese broadcast. The opening theme will be sung by JAM Project, members of JAM Project such as Hironobu Kageyama and others have also done songs for past Transformers series.

Additionally, Takahasi Hiroki, Kishio Daisuke, Akesaka Aatomi and Wakamoto Norio will be voicing Optimus Prime, Bumblebee, Sari, and Megatron respectively. Most of the dub cast have worked on Transformers characters in the past, such as Kicker from Super Link, who was also voiced by Kishio Daisuke, and Flame Convoy from Galaxy Force who now shares Megatron's voice. To view the source, click here.