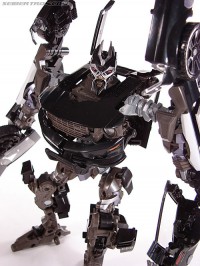 Among the couple thousands of toys in the galleries of Seibertron.com, 2007 Movie Deluxe Barricade is the 7th most viewed figure of all time. Two and a half years down the road we get a new incarnation of Barricade in the Human Alliance class. The evil Police car interacts with a Human sized Frenzy. Frenzy can 'drive' Barricade, be put into the hood and chest like the Deluxe version, and can also sit on Barricade's right arm to operate a gun - a gimmick for all Human Alliance figures.

Ever since Barricade was previewed at San Diego Comic Con 2009, there has been a lot of thoughts on the quality of the figure. Some have questioned the brown plastic, the dimensions and over simplistic look of the figure. Now whether you're on the fence with Barricade, or looking to buy it in the future, the galleries can help formulate your opinion with a 360 look at the Decepticon warrior, comparisons to previous versions of Barricade, and photos with other Human Alliance figures. Disregarding fan speculation, it looks like Human Alliance Barricade is a menacing figure and an outstanding piece to any Revenge of the Fallen collection. Check out some teaser pictures and a link to both Barricade and Frenzy's galleries below. Does Human Alliance Barricade make the grade for you? Share your opinion in the Energon Pub! For Barricade Fans, a gallery for the Gravity Bots figure has been added as well. Keep it at Seibertron.com for the highest quality galleries and the fastest Transformers news on the net!

For me the overall on this figure is:

Over all bot mode = Transformation looks better is these pictures compared to what i've seen before and looks we have another chicken walker amongst us as well.

Final verdict = Hasbro choice of colors for his limbs really really suck! i mean suck BAAADD!!! If I decide to pick this guy up and paint mode is in the works!
Re: New Toy Galleries: Human Alliance Barricade with Frenzy (1032155)
Posted by Rial Vestro on December 31st, 2009 @ 5:49am CST
I don't understand how Barricade and Frenzy can even qualify to be in a toy line called "HUMAN" Alliance. Neither one of them is human. Pluse Frenzy looks like crap. (Actully, do any of the mini figures look good?) Barricade however looks freaking amazing even I don't think he belongs in the toy line.

I think it would make a little more sence to have Alice in the toy line. At least she LOOKS human... even though she's really a robot.
Re: New Toy Galleries: Human Alliance Barricade with Frenzy (1032162)
Posted by Tigertrack on December 31st, 2009 @ 7:20am CST
This helped me realize something... I need to get a new Gravitybot (Barricade!!!!)

I like the toy, I will probably get him and leave him in alt mode. Frenzy can be thrown in a box a rip up Sam.
Re: New Toy Galleries: Human Alliance Barricade with Frenzy (1032223)
Posted by cybercat on December 31st, 2009 @ 1:19pm CST
This is the only HA figure that interests me, to be honest. (He shipped yesterday now I must lay in wait like a lioness in the jungle for the UPS guy). His body proportions look way better to me than his other figures.

The best 'likeness' of Barricade, let's be honest, was the keychain they made for the last movie. This is an awfully close second.

Rial Vestro wrote:I don't understand how Barricade and Frenzy can even qualify to be in a toy line called "HUMAN" Alliance.

Human shmuman. Decepticons need some representation, and Frenzy and Barricade make an entertaining pair (Bad Cop and Worse Cop!), and it works in context with the movie!

My fig funds are running on empty, so there's a real possibility I might have to pass this one up.
Re: New Toy Galleries: Human Alliance Barricade with Frenzy (1032425)
Posted by DMSL on January 1st, 2010 @ 4:48am CST
The colour of this face and inner limbs is off but i like the sculpt overall. They really needed to add something to the chest though to make it a bit less of a block. Still gonna buy it but will wait for the Takara version.

Frenzy, why is he brown and not silver?
Re: New Toy Galleries: Human Alliance Barricade with Frenzy (1045873)
Posted by Metallo on February 10th, 2010 @ 9:55am CST
He's worth buying IMO. I really like mine. Better than Bumblebee in a lot of ways.

My only gripes are the colors on his arms and legs (wish they were black and silver) a few more realistic details (like real tail lights), lack of two hands, and the hip joints. But I can look past most of that.

The good far outweighs the bad. I don't care for the movie toys but a few have impressed the hell out of me. Leader Prime for one.

I love Alternators so HA is right up my alley. I may end up getting Skids too.
Re: New Toy Galleries: Human Alliance Barricade with Frenzy (1045927)
Posted by Hip-Hoptimus Rime on February 10th, 2010 @ 12:47pm CST
Awesome figure, worth the price. Too much brown, yes, but paint markers work wonders. Ignore the official chest transformation and bend the middle of the bumper section up. The hand is easily modded to separate the fingers. I painted Frenzy silver and cut about 1/8th inch from his legs, he's way too tall.

He's my favorite HA right now, and I have all 4 currently available (Bumblebee, Sideswipe, Skids, and Barricade).
Click here to view additional comments about this topic at the Energon Pub Forums ...