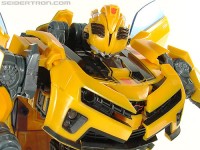 If your insatiable desire is to have more Bumblebee, well you're going to get more Bumblebee. The newest incarnation of the kid-friendly mute, yellow robot has made it's way into the illustrious toy galleries of Seibertron.com. Comparable to the Leader Class size, Battle Ops Bumblebee is a larger figure featuring many gimmicks and electronics, as well as weaponry collectively from previous Movie Bumblebee figures. Has a large scale Movie Bumblebee finally been done right? Will collectors forget the horrors of Ultimate Bumblebee? Feel free to form your own opinion by checking out the gallery in the links and pictures below! If you're interested in Battle Ops Bumblebee, you're likely to find the figure in your local retail chains!

Keep it at Seibertron.com for more galleries and the fastest Transformers news on the net!

This figure looks leagues better than 'Ultimate' BB, but I can't fathom why any collector would want a giant Bumblebee, unless scale doesn't matter. Must be awesome for the kids though.
Re: New Toy Gallery: HFTD Battle Ops Bumblebee (1110915)
Posted by DraconicDak on August 9th, 2010 @ 1:30pm CDT

This figure looks leagues better than 'Ultimate' BB, but I can't fathom why any collector would want a giant Bumblebee, unless scale doesn't matter. Must be awesome for the kids though.

I have a line of each mold of movie BB, and BOBB would make a nice endcap to that.

However, not at $60. I'll wait for the inevitable and likely very quick drop to $20 before I'll even consider buying him.
Re: New Toy Gallery: HFTD Battle Ops Bumblebee (1111067)
Posted by SKYWARPED_128 on August 9th, 2010 @ 8:18pm CDT
The only thing I don't like about him is his ridiculous size and that clear blue hand.

Otherwise, he's probably the perfect BB, with the best-looking head-sculpt and face plate among all his incarnations, great movie-accuracy in both modes, and unobtrusive gimmicks.

Re: New Toy Gallery: HFTD Battle Ops Bumblebee (1115892)
Posted by Cobalt Prime on August 21st, 2010 @ 12:49pm CDT
I just got him yesterday and I can honestly say that I like him. I feel satisfied with the purchase, as opposed to when I bought UB ( even at half off it was a disappointing train-wreck of a figure, like Supreme Cheetor! ).

I'm glad to see that they corrected the loose knee joint issue we saw in the video review earlier. The knees are extremely tight. The proportions and accuracy are well done, and the electronic gimmicks are cool, a feat that UB could not even accomplish with robotic movement added.

The only thing that would have made this figure perfect in my opinion is if they hadn't made the left arm monkey-style with the palm aligned with the forearm. If it had to be that way, they might at least have added enough articulation to the hand to allow him to make a fist. As it is, the poseability options of the arm are limited to "karate-chop" and "Hey buddy, can ya spare some energon?" Of course, the HA version suffered from this too.

Apart from that one gripe, an overall great figure with a lot of nice features.