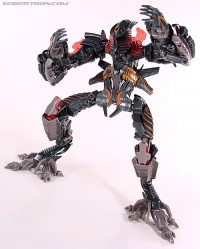 The undisputed advocate of evil has arrived here on Seibertron.com. The toy galleries have been updated with the Revenge of the Fallen's namesake, Voyager The Fallen. He was released in Voyager Wave 2, along with Desert Tracker Ratchet. You can look at his gallery in the link below; If you're interested in this figure, or wish that the Fallen's colours were more vibrant, than you'll be pleased to know that a repaint of the Fallen is coming in the near future. A 'Fire' color scheme will be an exclusive to Target, and will be in packaging similar to Robo-Vision Optimus Prime. Does the Fallen and it's upcoming repaint appeal to you, or is it a pass? Join in on the discussion in the Energon Pub!

Stay tuned to Seibertron.com for more galleries and updates! Expect galleries of Voyager Grindor, Voyager Whirl, and Deluxe Bludgeon to be appearing soon!

This seems as good a time as any to bring this up.
On BZP once, a few people were discussing whether or not The Fallen looked like Teridax.

Sabrblade wrote:Aww, no pics of him with the 6" Titanium The Fallen?

Nope, not at this time. I haven't been doing any comparisons with the ROTF figures with previous incarnations other than with the same mold or from TF1. Too many galleries to do at this time to be busting out older figures for comparisons. Perhaps when the next The Fallen figure comes out in ROTF after I've completed most of the ROTF galleries I'll do some comparison pics with the other version of him.
Re: New Toy Gallery: The Fallen (977540)
Posted by Swiftknife24 on August 19th, 2009 @ 4:00pm CDT
I think if The Fallen is included in the Premium line, it should have more detailed paints (especially on those fronds on either side of his face that should be blue). And it should include his staff, too!

Re: New Toy Gallery: The Fallen (977726)
Posted by The Fallen Prime on August 19th, 2009 @ 9:24pm CDT
I own this figure and it is a really solid figure! Although I can't say the same for many of the other figures in the Voyager class, unfortunately. The Fallen seems to have been built from better plastic and the design is really awesome. It has to be my favorite from that class, at least.

I'm looking forward to the repaint as well! Even though it doesn't seem to be quite in line with what he looks like in the movie itself, the color scheme sure does try to make it so.