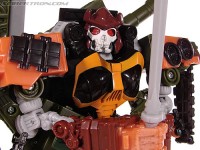 Seibertron stated that he's waited 20 years for this figure to be made. After seeing the teaser back at Botcon 2009, it was one of the most anticipated toys of the year for many fans. We're talking about the one and only Master of Metallikato - Bludgeon. Finally the Voyager sized figure under the Revenge of the Fallen toy line makes it's way into the prestigious galleries of Seibertron.com.

Bludgeon takes the form of a "Jungle Tank" and transforms into a Samurai Robot - similar to the original Generation One Bludgeon. This gallery not only shows Bludgeon in the highest quality possible, but it also tells his tale. From the decapitation by the hands of Whirl to his eventual encounter with Recon Ironhide, we get a breath-taking look at one of the greatest figures of 2009.

You can check out the Voyager sized homage in the link below.

Revenge of the Fallen Voyager Bludgeon Keep it at Seibertron.com for world-class galleries and the fastest Transformers news on the net! Jetstorm9221 wrote:I guess Bludgeon's defeat by Whirl was only a flesh wound.

fenrir72 wrote:I am so waiting to get the Takara version of him (that is if there are some significant paint apps additions)

No Takara issue of ROTF figures have had any so far to my knowledge. Although the white Demolishor and red Rampage may indicate a change in direction.

Spoof or not, Speaking as a Megatron Fan and Collector.... Ow that hurt.
Re: New Toy Gallery: Voyager Bludgeon (1031703)
Posted by --B-- on December 29th, 2009 @ 10:37am CST
Great gallery, and I love the G2 cover homage, but am I the only person here that thinks this is a pass? The last picture with Classics Megs and Screamer along with Universe Dragstrip, makes Bludgy stick out like a sore thumb. I guess he is just a little too movieish for my tastes.
Re: New Toy Gallery: Voyager Bludgeon (1031705)
Posted by El Duque on December 29th, 2009 @ 10:50am CST
Picked up this guy and Deluxe Dirge yesterday, both are excellant figures. Bludgeon is easily one of my favorite ROTF figures, second only to my Buster Prime. I think he fits in with my Classics/Uni/Neo G1 display great. He has his own look that's for sure, but I think that has more to do with his skeletal appearance that anything else.
Re: New Toy Gallery: Voyager Bludgeon (1031741)
Posted by RK_Striker_JK_5 on December 29th, 2009 @ 4:08pm CST
The gallery is awesome. The toy is beyond sick into surreal into toygasm. I have him, love him...

He killed his Decepticon leader