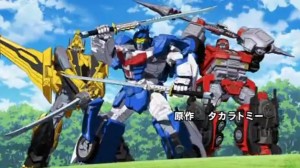 Thanks to Seibertron.com member Sabrblade for pointing out that Takara Tomy's Transformers Go! animation has new opening and ending themes. Check them out below from YouTube user walruslaw

Though, I can't tell who the performers of each are.

And the end credits just used the instrumental music themes of the two Swordbot teams instead of any real ending theme song.

So what we have here are the first true cases of actual theme song sequences for this show.

Sadly, though, it is a bit unfortunate that all the footage was just recycled from the existing episodes instead of being new material, but I guess such is to be expected from a series as low key as this one is.

Also, it kinda seems like the opening favors the Samurai Team more over the Shinobi Team, with the former getting more attention than the latter.

Re: New Transformers Go! Opening and Ending Themes (1518837)
Posted by El Duque on September 19th, 2013 @ 10:47pm CDT
Thanks to the Takara Tomy YouTube channel we have a nice high quality upload of the opening sequences (Swordbot Samurai and Swordbot Shinobi) from their Transformers Go! animation. Check out the video embedded below.

Re: New Transformers Go! Opening and Ending Themes (1518839)
Posted by Sabrblade on September 19th, 2013 @ 10:58pm CDT
The reason there are two openings is because there are two versions of the show running concurrent of each other. The first one is for the Samurai Volume episodes that focus on the Swordbot Samurai Team, while the second is for the Shinobi Volume episodes that focus on the Swordbot Shinobi Team.

The name of this song is "TRANSFORMERS-Go!", and it freaking ROCKS!