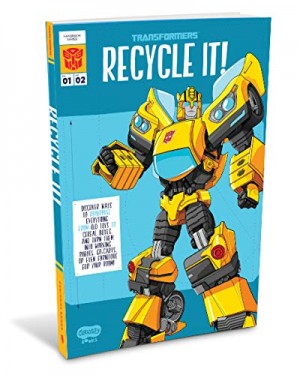 Reduce, reuse, and recycle, yo! Why you ask, you may ask. Well, we have news of a new book! The Transformers Give Your Old Stuff The Reboot! or as seen on the cover, Transformers Recycle It! Written by Devra Newberger Scollon (and photographed by Anthony Nex), the book itself appears to be a guide book on how you can use junk like cardboard or... Kool Aid (you'll see) and turn it into working robots, furniture, and more! It also includes a kit to build a 3D Transformers character (presumably out of cardboard or thick paper).


Bumblebee and his team of Autobots show kids how to TRANSFORM all their old junk into cool, new swag! They’ll discover ways to recycle and repurpose everything from old toys to cereal boxes, and transform them into working robots, go-carts, even sturdy, usable furniture for their room! There’s even a fun way to TRANSFORM expired Kool-Aid into paint! Front and back gatefolds include punch out and assemble 3D Transformers!

You can see the Amazon listing here or click the image of the cover below. The cover itself below depicts the evergreen design of Bumblebee used in Cyberverse. The book itself is Paperback and is set to start shipping out on March 29th, 2019. You can pre-order it now for $12.99.

So thoughts on this product? Tell us in the Pub forums below! 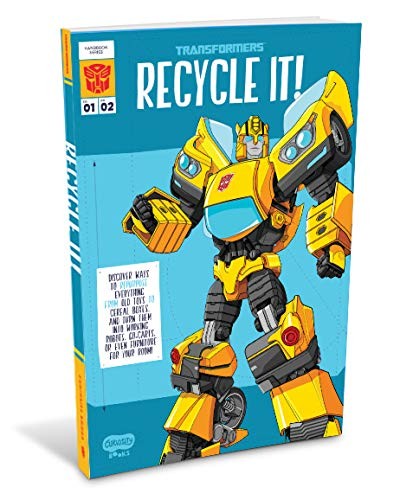 Sad but true. Solving that wicked problem might indeed require us to create actual Junkions in real life.
Re: New Transformers Recycling Guide on Amazon for preorder (1998088)
Posted by Dr. Caelus on December 10th, 2018 @ 3:48pm CST

Bumblevivisector wrote:Does it explain how to avoid the common problem of recycling programs in the U.S. sending stuff to landfills anyway for economic reasons?

Sad but true. Solving that wicked problem might indeed require us to create actual Junkions in real life.

Are they actually sending recyclables to landfills? Because one of the major challenges recycling programs face is people throwing nonrecyclables (or outright garbage) into their recycling bins.

At our last apartment complex, they abandoned the recycling program after a few months because people were using the recycling bin for trash - it was all of twenty feet further to the actual garbage dumpster, but people were so disdainful of environmental concern - or so lazy - that they'd fill the recycling bin with garbage until it overflowed, and then pile more garbage on top. My apartment complex before that gave everyone individual recycling bins to keep in their kitchens - our neighbors set it outside next to our backdoor and filled it with organic waste.

I can't imagine how much fuel good recycling programs waste transporting trash, or how much money they burn sorting it out from the stuff that's actually recyclable, simply because so many Americans want to play at being a Captain Planet villain.