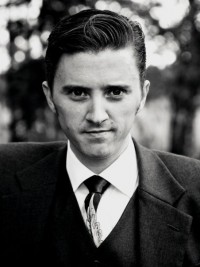 Apocalypse Comics has announced one more last-minute addition to their line up of guests for this year's New York Comic Con.

Shane McCarthy (Mac) presently resides in Perth, Western Australia, officially one of the top ten most furtherest away from everywhere places on the planet.

He is currently employed as a freelance writer, working for the likes of DC and Marvel Comics, and is still in awe at the unyielding enjoyment levels brought about by his 1970’s Atari version of Pong. Amongst other things Shane has worked on BATMAN LEGENDS OF THE DARK KNIGHT, DETECTIVE COMICS, DARK X-MEN, STAR WARS and wrote the twelve issue maxi-series TRANSFORMERS: ALL HAIL MEGATRON.

When not delving into the topsy turvy world of comics, Shane can be found teaching and dancing the ‘Lindy Hop’ – a 1930s swing dance which involves big pants and throwing women around. It is funny because it implies there were far better guests to get ahold of!

It is funny because it implies there were far better guests to get ahold of!

Also he needs to work on his Kubrick Stare.

No, last minute as in it's a week before the convention.