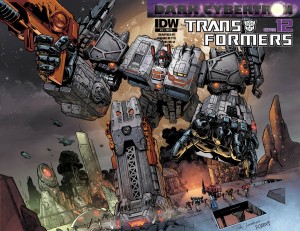 Comics and entertainment website Newsarama has posted an article on the ongoing collaboration between Hasbro and publisher IDW. In the piece, senior editor and Robots in Disguise co-writer John Barber and Hasbro's director of publishing Michael Kelly look upon the current work produced by the two companies, ranging from My Little Pony to G.I. Joe to, of course, Transformers. You can read the whole piece here, and some snippets below!

IDW Senior Editor John Barber describes the partnership as “a nice relationship of trust and mutual respect” built over the past eight years and the successes’ IDW has had with the properties. Barber, who worked previously at Marvel guiding titles like Wolverine, Stephen King’s Dark Tower and the Ultimate line, says that there’s a misconception about the differences between licensed comics and comics owned in-house.

“I always feel—and maybe this isn’t the case—but I feel like people want to create a situation where the licensed comics are in a different category than “normal” comics,” Barber points out. “In my experience, the practical reality of working on Transformers or G.I. Joe is essentially the same as working on a comic at Marvel. I mean—they’re not some unusual beast that’s outside the range of normal comics.”

"Working with the Transformers team and getting these comics out in the toy packages, all while building to an epic story that’s satisfying to existing fans. I think that’s a big moment for us—and there’s this amazing thing happening near the end of “Dark Cybertron” that I couldn’t believe it was going to make the jump to the toys,” teased Barber. “But I can’t talk about it yet, which is a lame answer but it’s really a fun twist on a well-known premise. It was something that originated—I think, if I remember right—with Mark Weber on Transformers brand team, and More Than Meets The Eye writer James Roberts and I couldn’t believe it was an idea on the table, let alone that it would be reflected in the toys. Sorry to have to be really vague about it.”

Re: Newsarama on Hasbro and IDW Collaborations, John Barber, Michael Kelly (1537271)
Posted by T-Macksimus on December 23rd, 2013 @ 8:45pm CST
Well, this is going to drive some of us crazy with anticipation. The possibilities of what may be coming with the toy/comic crossover are practically boundless but I do have to wonder a bit how they are keeping things under such tight wraps when many of the 2014 figures, at least up through the Spring, are already being teased/listed.

It's also quite cool that after seeing the first cover for DC-12 with Megs and Shockwave we get to see an alternate cover with Metroplex, especially after I had mentioned how cool it would be to maybe have a cover showing Metroplex and NecroTitan duking it out. This isn't quite that epic but it's still cool seeing the big guy lumbering up across the landscape providing back-up for Orion and company.
Re: Newsarama on Hasbro and IDW Collaborations, John Barber, Michael Kelly (1537433)
Posted by 1984forever on December 24th, 2013 @ 12:30pm CST
Hasbro and IDW are working closely together? Since when!? IDW only wants to tell stories with the Transformers on Cybertron because their writers are not talented enough to write good stories about them on Earth. As a result, most IDW Transformers have Cybertronian alt-modes. Hasbro knows kids like Earth based alt-modes so they design toys turn into Earth based Cars and Planes. This is why we see comics included with the toys depicting them with inaccurate alt modes or showing tow trucks on alien worlds... despite the fact that Hoist was already shown as a Cybertronian tow truck in an early issue of MTMTE. Is this a sloppy cash grab or does IDWbro think we're all stupid?