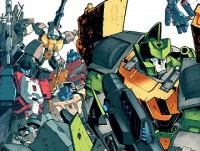 OneShallStand, a Transformers website that focuses on comics, have interviewed the main duo behind the Last Stand of the Wreckers series - Nick Roche and James Roberts. The two are asked a series of intriguing questions, and there's also some unseen preview art to boot. You can check out an excerpt below...

No job is too big and no mission too dangerous for the Wreckers! The Autobots' elite commando unit are the bots Prime turns to when the going gets really tough, and they've been kicking ass ever since their explosive debut in the 1986 Marvel classic Target 2006. Some 24 years on the team is all set to Wreck n' Rule again, as they undertake their most suicidal mission to date - breaking into the Garrus 9 space prison!

At the helm for this hugely anticipated five-comic series is the much respected Nick Roche and James Roberts, in their first professional collaboration. Both are proud that their story, which launches in January 2010 from IDW publishing, will be the first Transformers #1 of the new decade... and what a ride it promises to be. Not all your favourite characters will make it back from this one - you've been warned! OneShallStand.com finds out what Nick and James have in store... (contains teasers not spoilers).

..while the rest of the interview can be seen here.