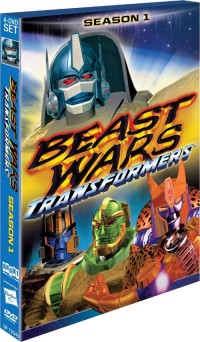 Here is the official press release regarding Beast Wars season 1 and the complete series from Shout! Factory.

Brace yourself to relive some of the most epic TRANSFORMERS battles and non-stop action adventures through the 15th Anniversary release of BEAST WARS. In 1996, TRANSFORMERS fans were introduced to this stunning saga between the heroic MAXIMALS and the evil PREDACONS where these powerful TRANSFORMERS disguised themselves as some of the fiercest and most ferocious animals on Earth. In a flash of an instant, these beasts turned into battle-tested robot warriors ready for combat. Created by Hasbro and produced by Mainframe Entertainment, the hugely successful animated series TRANSFORMERS: BEAST WARS ran for three successful television seasons and garnered an Emmy Award for Outstanding Individual Achievement in Animation.

On June 7, 2011, Shout! Factory, in collaboration with Hasbro, Inc., will unleash the TRANSFORMERS: BEAST WARS Season One 4-DVD set, featuring all 26 visually stunning episodes and exciting bonus features. A must-have for fans and families, this DVD set promises to keep you on the edge of your seat with exciting adventures and is priced to own at $29.93 SRP.

As excitement builds for these home entertainment releases, Shout! Factory will announce additional activities for fans in the incoming months.

TRANSFORMERS: BEAST WARS Season One 4-DVD set Synopsis: When the descendants of the treacherous DECEPTICONS - now known as PREDACONS - land on a mysterious planet in search of a powerful fuel known as Energon, it's up to OPTIMUS PRIMAL and the heroic MAXIMALS to stop them before they conquer the universe! Bonus Features Include:
Maximize! Creating A New Breed of TRANSFORMER
Art gallery
Original character models


About HASBRO
Hasbro, Inc. (NASDAQ: HAS) is a branded play company providing children and families around the world with a wide-range of immersive entertainment offerings based on the Company's world class brand portfolio. From toys and games, to television programming, motion pictures, video games and a comprehensive licensing program, Hasbro strives to delight its customers through the strategic leveraging of well-known and beloved brands such as TRANSFORMERS, LITTLEST PET SHOP, NERF, PLAYSKOOL, MY LITTLE PONY, G.I. JOE, MAGIC: THE GATHERING and MONOPOLY. The Hub, Hasbro's multi-platform joint venture with Discovery Communications (NASDAQ: DISCA, DISCB, DISCK) launched on October 10, 2010. The online home of The Hub is http://www.hubworld.com. The Hub logo and name are trademarks of Hub Television Networks, LLC. All rights reserved. Come see how we inspire play through our brands at http://www.hasbro.com. ©2011 Hasbro, Inc. All Rights Reserved.

About Shout! Factory
Shout! Factory is a diversified entertainment company devoted to producing, uncovering and revitalizing the very best of pop culture. Founders Richard Foos, Bob Emmer and Garson Foos have spent their careers sharing their music, television and film faves with discerning consumers the world over. Shout! Factory's DVD offerings serve up classic, contemporary and cult TV series, riveting sports programs, live music, animation and documentaries in lavish packages crammed with extras. The company's audio catalogue boasts GRAMMY-nominated box sets, new releases from storied artists, lovingly assembled album reissues and indispensable "best of" compilations. These riches are the result of a creative acquisitions mandate that has established the company as a hotbed of cultural preservation and commercial reinvention. Shout! Factory is based in Santa Monica, California. For more on Shout! Factory, visit shoutfactory.com.

BluePhirePB wrote:Wait, so you can either buy the ENTIRE series or Beast Wars or just Season 1? Will they release a Season 2 and 3 later on?

Re: Official Shout! Factory Beast Wars DVD Press Release (1237378)
Posted by Mindmaster on June 10th, 2011 @ 5:08pm CDT
I didn't know that Shout! Factory sold their DVDs at retail! I'll keep a lookout on these, since Beast Wars is one of my favorite series.