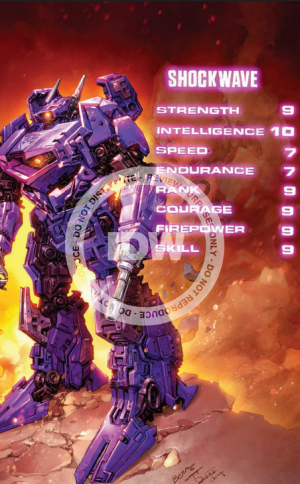 'I don't know what's gnu with you?'-- some joke from my childhood. 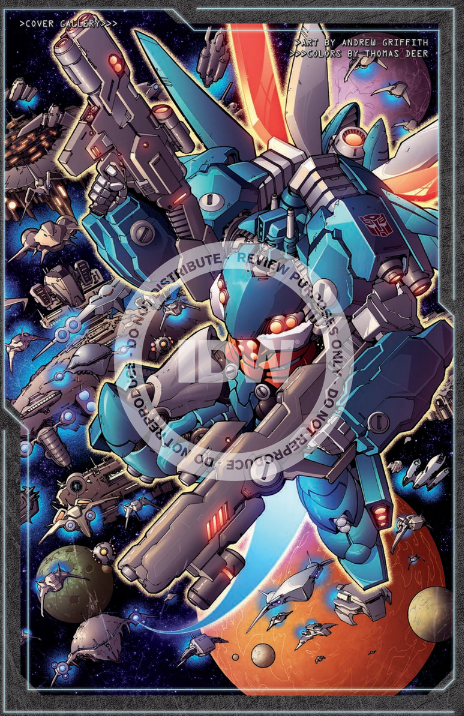 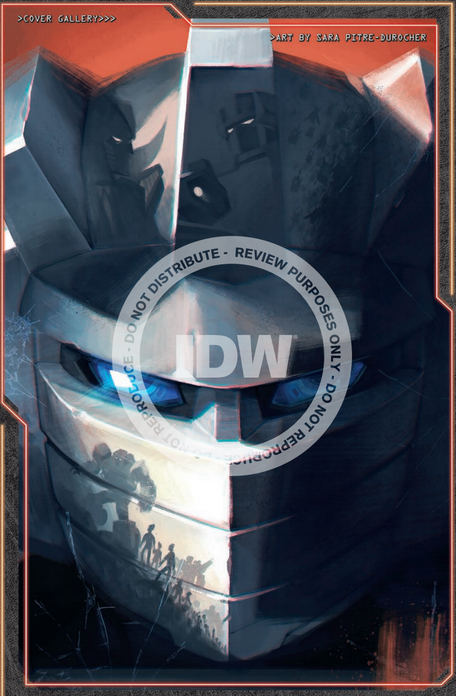 And, finally Transformers War World (ongoing) Issue #26 is available digitally this week, and printed next week! Review by ScottyP coming next week. 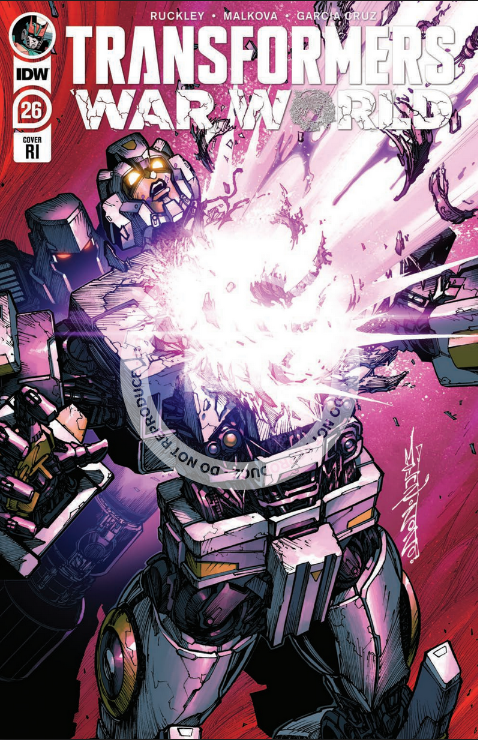 You can buy these issues including variant covers like the one above in the Seibertron.com eBay store!

Galaxies #12 - Mini-Review
This beautifully drawn, colored and created series comes to a close and only somewhat disappoints…especially because the last issue was almost two months ago! 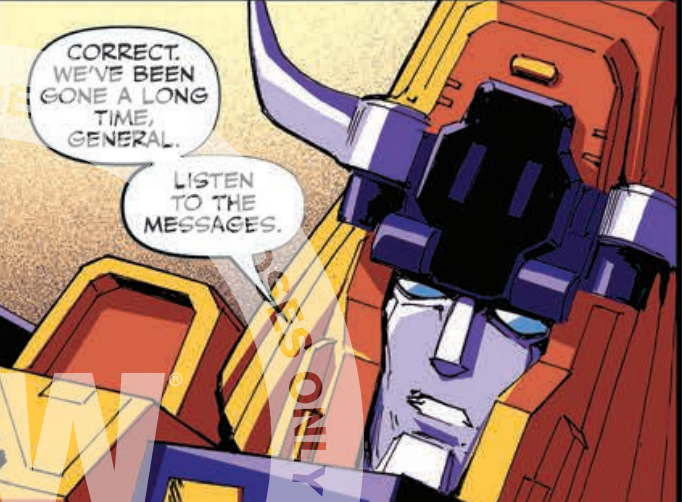 I want to rave about the visual creative team here for a bit with more on the story later. Art was by Transformers veteran Andrew Griffith with colors by Josh Burcham and letters and design by Jake M. Wood. The characters are, to put it simply, beautifully and expressively rendered. The giant Magnus space armor rings of Iron Man suits and of course, the armor used in the showdown with the DJD in Transformers More Than Meets the Eye. It can make one wonder how many suits of armor a bot in another suit of armor has available to him, but it’s an interesting and somewhat overboard newish take on Magnus and his apparent love for armor. Or for creative teams to just want to power him up with even larger armors… I was in awe of so many of the panels. How many layers does this seemingly straight-forward warrior bot have? I hope we find out about more, as we have yet to see Minimus Ambus be any part of this continuity. 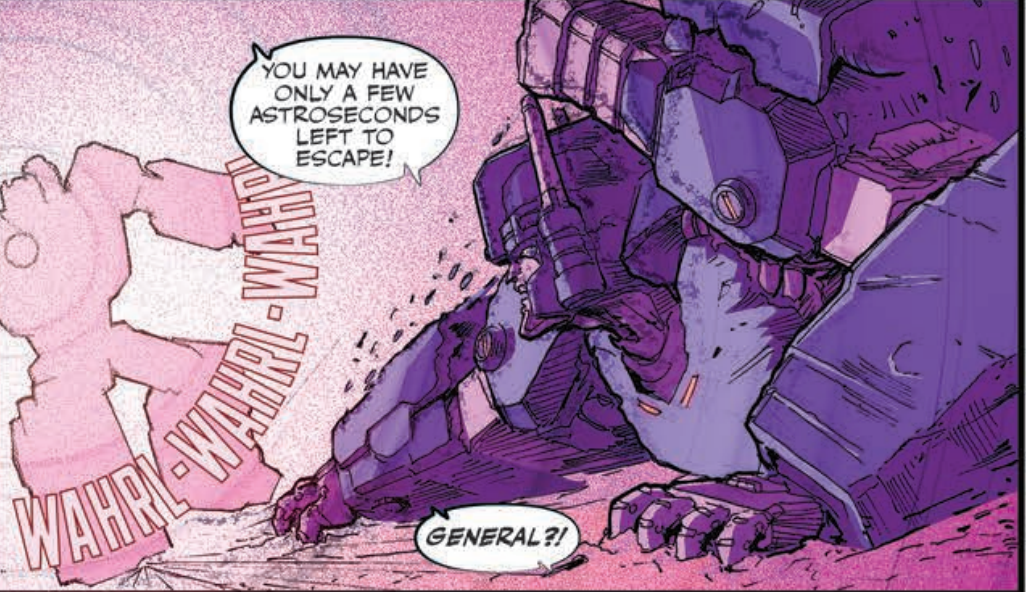 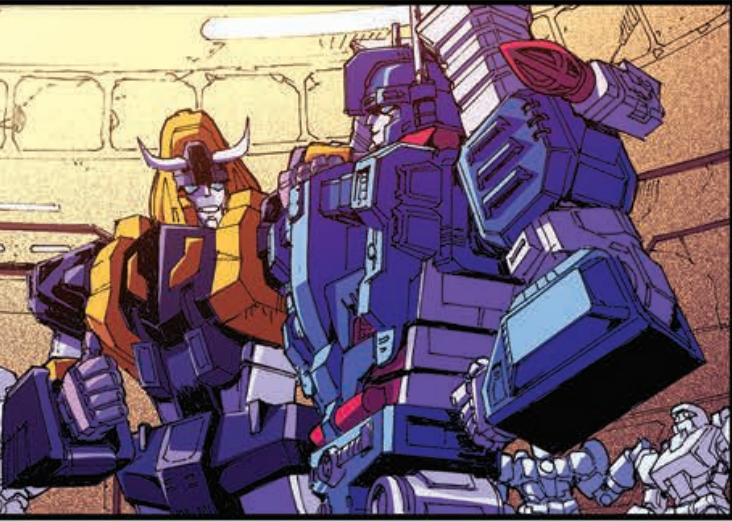 "I hear you like to combine with large armors..."

As for the story, I can say issue #4 wraps up the whole thing rather neatly, and sadly, without much pomp. I had to go back and re-read issue #3 to remind myself exactly what was happening in this storyline and how it fit into the overall occurrences happening in the regular series. It seems we were fit for a bit of a real-life version (about 2 months minimum our time since issue 3) of the messed up time passing in the book, as we find out that since they left Cybertron, much has happened (all the upheaval and overthrow of the Senate that is happening in the ongoing). It clearly leads directly into what is happening in current issues and the next series to come out…ESCAPE. 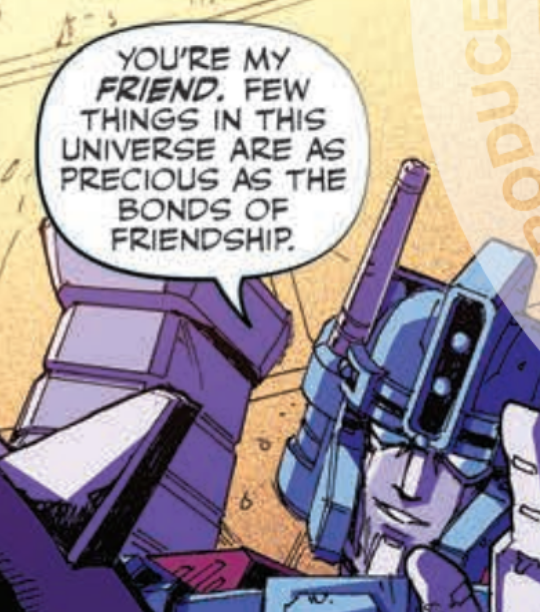 Escape #1 - Mini-Review
Back on Cybertron, albeit currently a different crew than was in Galaxies, we are starting to experience what the Decepticon uprising is causing to others in more detail. It was clear with what Quake had done that the other alien species on Cybertron were not as safe as they once were, and that in a large part their safety depended on what was in place…which has been uprooted and changed.

Here's what I think of your status quo!

All of that changed, and as we can see at the beginning of Escape, things are escalating quickly as the new threats to Cybertronians and non-Cybertronians like the A’ovans on the planet have taken an even deadlier path. Enter those carnivorous, blood-thirsty Insecticons from Galaxies 1-4, the guys who playing back up to the main story about the Constructicons. They’re back on Cybertron and they are dangerous and ravenous. They aren’t the cutesy bugs who ate crops and manipulated people and robots in cartoons of old, no they are much more dangerous and unstable..and they seem to have an appetite for organic more than metallic lifeforms. It’s turned into a horror show and if the last panels in Galaxies #12 shows us anything, it is going to be possibly much, much worse. 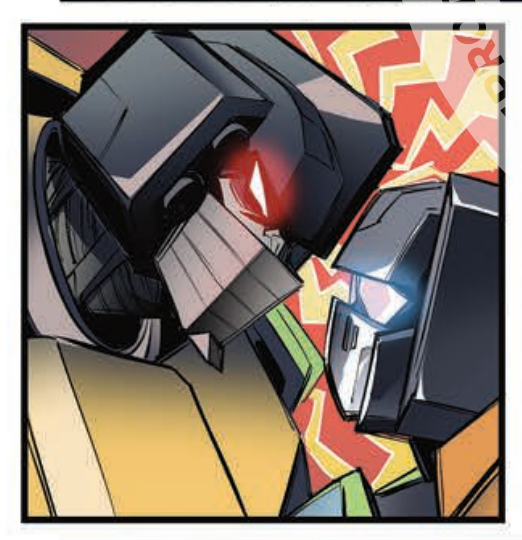 It is to this new level of threat and civil war that we are introduced to the idea that it may be time for many beings to leave Cybertron. Those who were representing other worlds, saved or transplanted to Cybertron, and those who are natives who want nothing to do with the current danger.

In a society filled with new perils being introduced, and misinformation and propaganda being spread freely, there is apparently, a lack of spaceworthy vehicles on the planet, and it appears that some possibly dangerous barter will need to happen in the section of the planet many will recognize…Darkmount, home to Straxxus -in previous continuities a Deception tyrant with Megatron levels of aspiration and power- what will he be like in the new continuity? We will find out soon enough.

Is there a good equivalent to all of these new evil threats? It appears that, yes, we can count on another heroic captain from Transformers history to be pulled from stasis and introduced, but will he help? Or is this another story-telling trap? 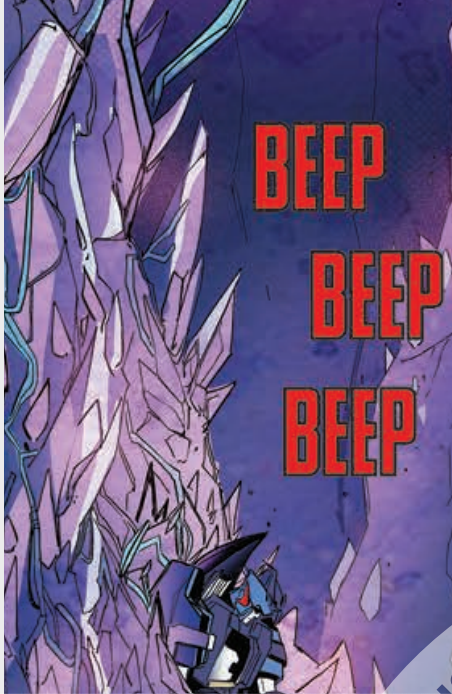 Another creatively, inspiring issue with art by Beth McGuire-Smith and colors by Priscilla Tramontano and letters by Jake M. Wood. I found myself drawn to the amazing contradictions and patterns being spun between characters and their environments. There were some truly amazing texture and color work put together here to make some eye-catching panels. I find Beth’s work reminiscent of Sara Pitre-Durocher’s in the expressiveness of the eyes and faces of the robots, as well as, the bodies movements. I think you can tell when Beth was really having fun drawing panels, especially those involving the Insecticons, really letting her expressiveness and energy show through. I think she depicted comically well, how out of control the Insecticons are over their hunger… maybe a little too comically at times, but overall it works right now! I do hope that we see darker indicators in color usage as the situation becomes more dire in issues to come. 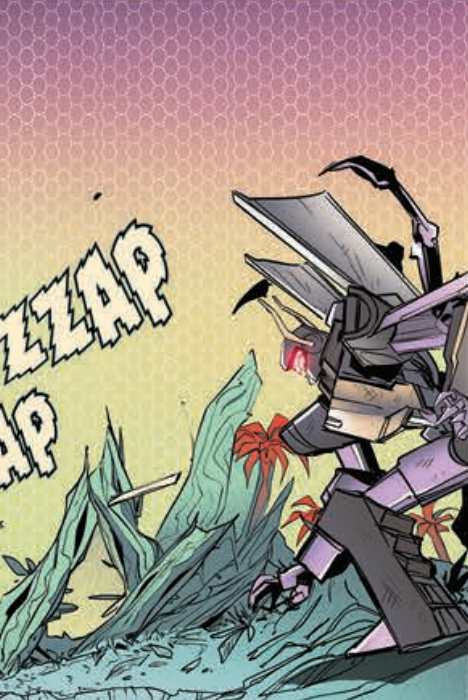 These Insecticons remind me of Transformers Prime’s scary big and deadly Insecticon, Hardshell. Vicious and deadly, but with a mix of vampires and zombies mixed in. It’s truly a bit frightening take on some characters who were lovingly flawed, but pretty regular bad guy robots. Tyler Bleszinski really did well to turn them into a nightmare for current Transformers fans in Constructicons Rising and we now see the foretold events unfolding. This does harken back to before Tyler, as well though, if you remember the Insecticons on Cyberton that threatened the Autobots in 'All Hail Megatron' - they as a swarm were pretty dark also...except BOB!!! 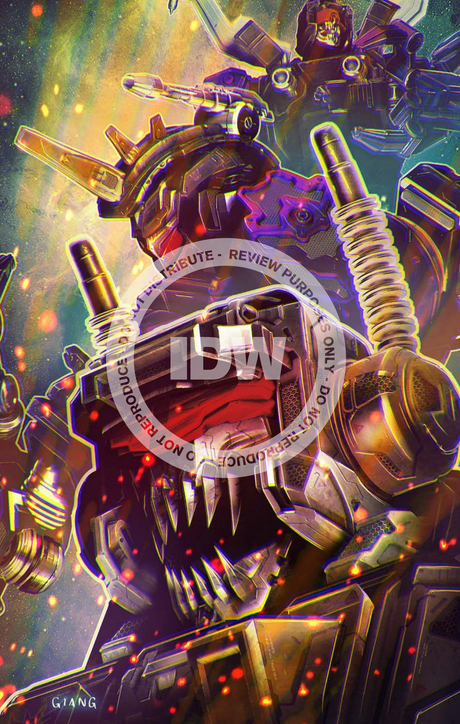 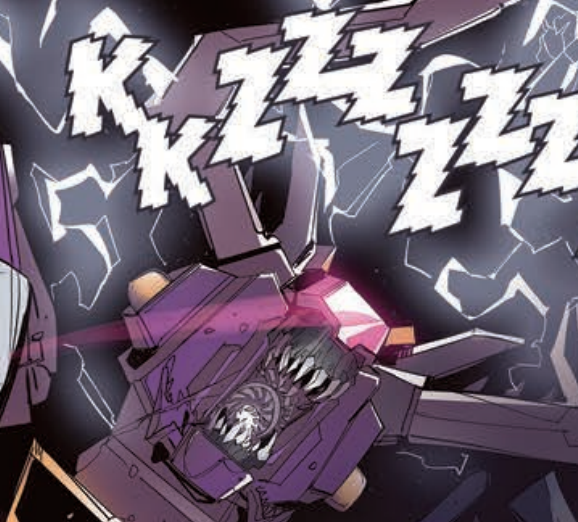 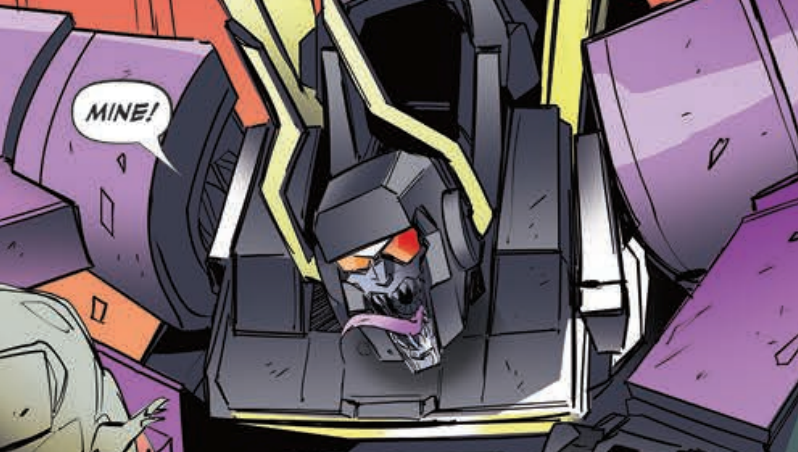 Escape looks promising in its not as simple as it sounds. To get off the world that is not what it was is the goal, but it seems that goal has been put on a deadly timeline with a quest for resources that are seemingly scarcer than we were once led to believe.

The first issue shows promise with the return of the Insecticons and the brief introductions of some new (old) characters in Straxxus and the possible Autobot savior. 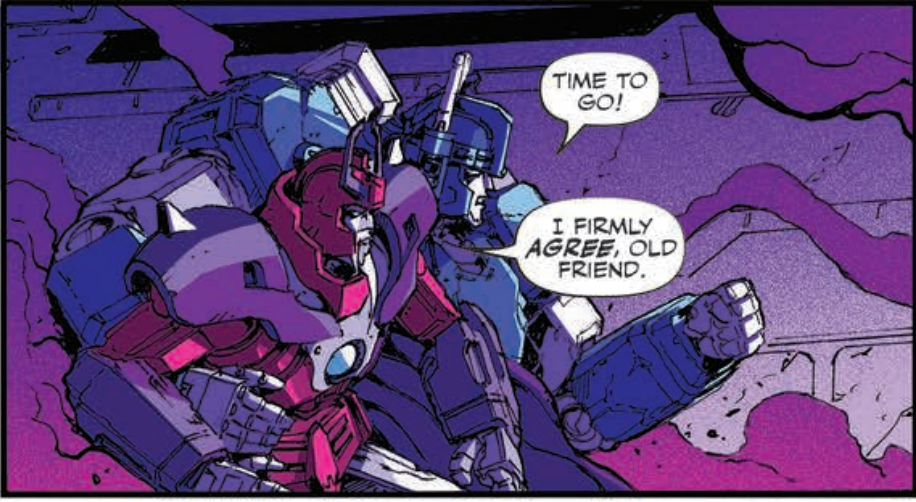 Posted 2 days ago
News Categories: Toy News, Movie Related News, Cartoon News, Comic Book News, Site News, Rumors, Event News, Digital Media News, Collectables, Sponsor News, Game News, Site Articles, Store News, Company News, People News, Press Releases, Reviews, Sightings, Unlicensed Products News, Auctions, Transtopia, Interviews, Knock Offs, Collector's Club News, Editorials, Heavy Metal War, Podcast, Contests, Book News, Top Lists
Click here to post your comment about this news story!
Re: Out This Week! Transformers Escape #1 and Transformers Galaxies #12 Mini-Reviews (2091123)
Posted by ScottyP on December 31st, 2020 @ 1:58pm CST
I enjoyed this pair more than I thought I would, especially Escape. I have to wonder if some of Escape's content was meant to come earlier, TF 20 had that cover with Hound and the A'ovans that looked like the scenery from this issue but none of that content within it (or maybe 20 did have that and I totally forgot.)

Galaxies finished strong, the Easton and Griffith creative pair up worked really well. I'd be down for one of the more tenured artistic voices to get more run on the main book, could be what it's missing - that's not a knock on the new folks like Malkova and McGuire-Smith, more just me speculating about something that might increase my enjoyment of it.