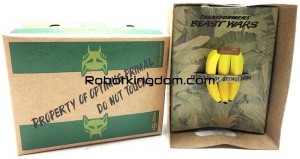 Site sponsor Robot Kingdom has uploaded some new images for the upcoming MP-38 Beast Wars Optimus Primal Supreme figure, and these images show off the packaging and the little bonus gift of a crate of bananas! These new images show that the packaging has both his robot and beast modes, and shows off his many features. The bananas, meanwhile, come in a crate humorously covered with warnings that the bananas are property of Primal and you shouldn't touch! Check out the new images, and let us know what you think in the comments section below! 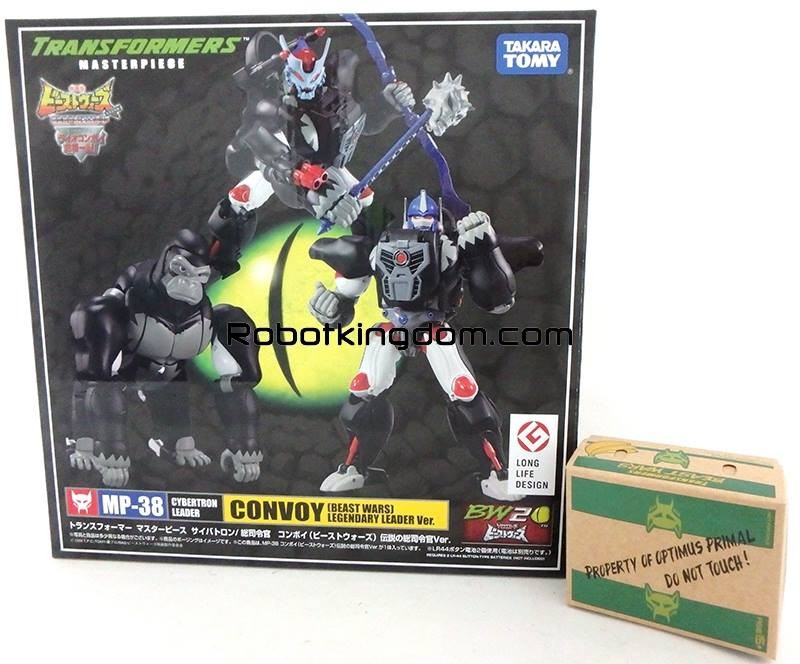 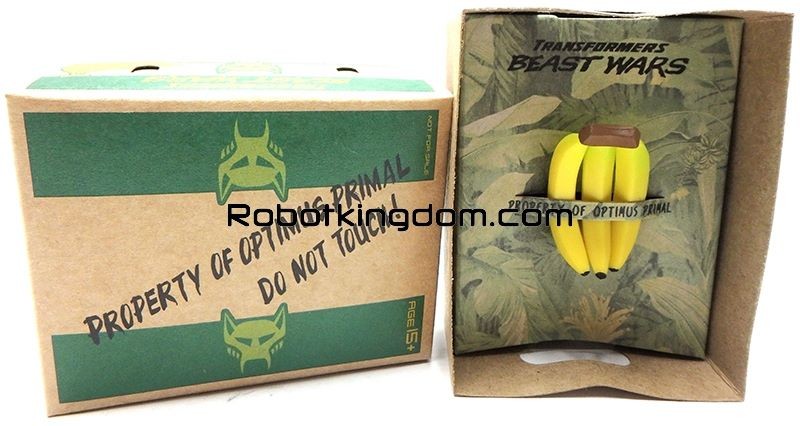 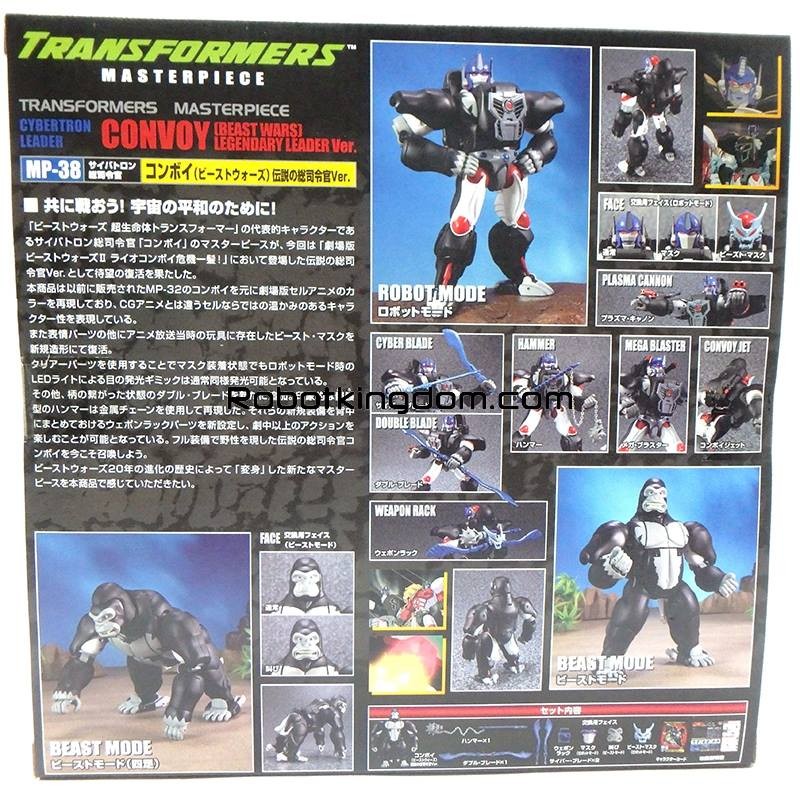 well I'll take this news as a good sign that he will be release on time.

Optimum Supreme wrote:Bananas as an accessory seems a little racist. Do you give the rat guy a bubonic plague accessory?

Optimum Supreme wrote:Bananas as an accessory seems a little racist. Do you give the rat guy a bubonic plague accessory?

You watch, MP Dinobot will come with a little accessory that is like a piece of skin from his imposter that Megatron made in that one episode
Re: Packaging Images for Masterpiece MP-38 Beast Wars Optimus Primal Supreme (1891632)
Posted by Sabrblade on June 22nd, 2017 @ 6:21pm CDT
This isn't racist, it's bananas.

Just got my Payment Request from Amiami.
That gorilla is in full swing!
Re: Packaging Images for Masterpiece MP-38 Beast Wars Optimus Primal Supreme (1891682)
Posted by D-Maximal_Primal on June 22nd, 2017 @ 11:02pm CDT

Just got my Payment Request from Amiami.
That gorilla is in full swing!

Welcome to the jungle, we got fun and games
We got everything you want, honey we know the names
We are the people that can find whatever you may need
If you got the money honey, we got your disease

Just got my Payment Request from Amiami.
That gorilla is in full swing!

Welcome to the jungle, we got fun and games
We got everything you want, honey we know the names
We are the people that can find whatever you may need
If you got the money honey, we got your disease

You were right weren't you sir!
Re: Packaging Images for Masterpiece MP-38 Beast Wars Optimus Primal Supreme (1893474)
Posted by SureShot18 on June 30th, 2017 @ 3:10pm CDT
MUNKY COMMANDER BANANA-PANTS! I need an MP Primal but I'll probably get the toon deco, unless I am able to get the toy version off an import site for $80-$90. Funny, I have a strong dislike for the cartoon accuracy on the G1 MPs but I love it on the BW ones, I should elaborate on that at a later date.

Well, I guess I did buy an MP Prowl but I really only wanted the Samurai Prowl that came with it and ended up selling MP Prowl a few days after I received it. I ended up getting Samurai Prowl for free that way since I made back the purchase price just by selling the MP Prowl.
Re: Packaging Images for Masterpiece MP-38 Beast Wars Optimus Primal Supreme (1893682)
Posted by DecepticonFinishline on July 1st, 2017 @ 7:27pm CDT
Great review, bro! Did you have Henry Doorly in mind when you mentioned the glass?

Re: Packaging Images for Masterpiece MP-38 Beast Wars Optimus Primal Supreme (1893688)
Posted by Cobotron on July 1st, 2017 @ 8:16pm CDT
So I wasn't thrilled with what I saw with MP-32. Toon accuracy has never been my bag. While I loved the Beast Wars cartoon, I didn't love it for it's art. I knew then they were maxing out their CG capabilities. They did the best they could with what they had. But what that show really did best was tell a story.
Oh but man! I do love me those Beat Wars toys. I often refer to my OG Primal toy as my "Buzz Lightyear". He is hands down one of my all time favorite Transformers.

The beast mode sculpt On MP-32 is what bothered me, and the painted hair texture even more. When I saw the reveal of MP-38 Optimus Primal Legendary Leader Version, my interests were peaked. Although it still had that smooth car dealership inflatable gorilla look to the beast mode, the new deco helped me see more of what I wanted to see. The toy. And the accessories sure helped that too. So I decided I'd give the old ape a try.

So let's get down to monkeying around! 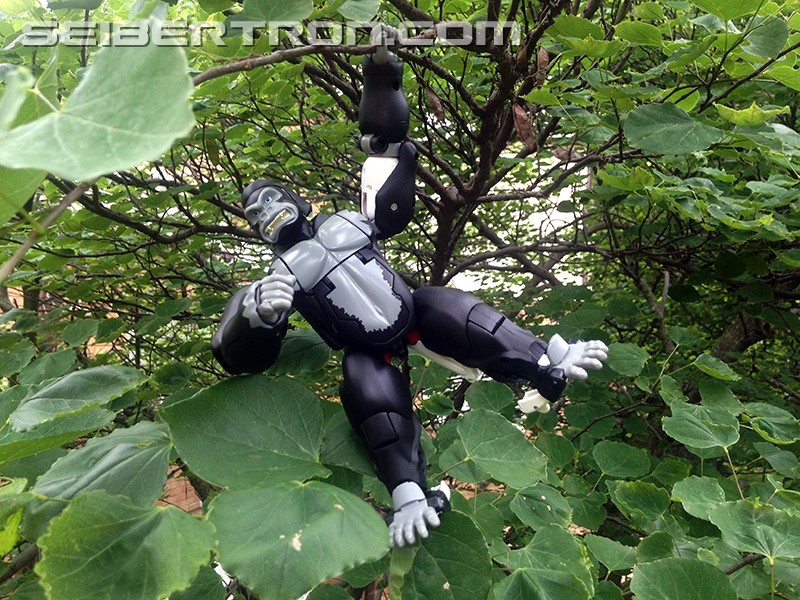 I don't mind eating a little crow. This Masterpiece certainly exceeded my expectations.
This is my first time with this mold. So for me this isn't a rehash of what I already know. This is a real time first impression. 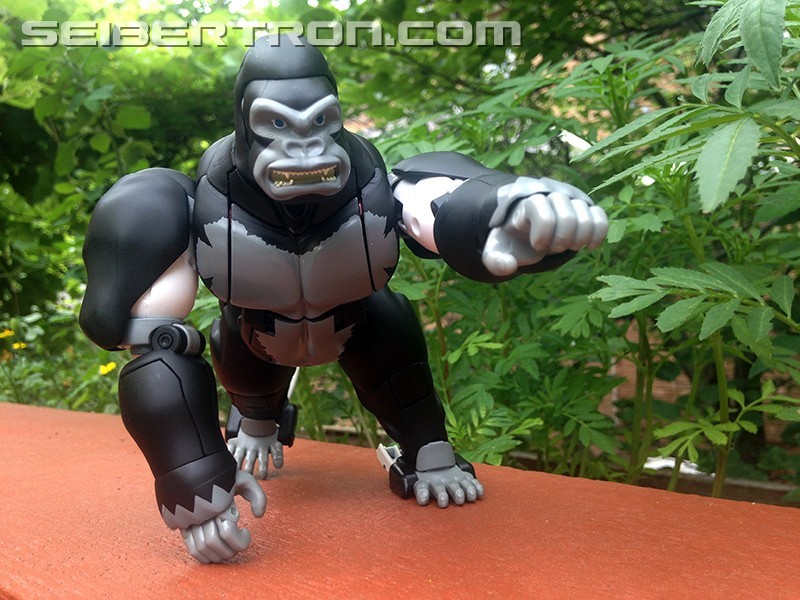 BACK OFF THE GLASS KIDS! The alpha is angry.


While I'm still not crazy about the beast mode, it is starting to grow on me. Poseability is OK, but the character that the different faces bring really help this mode become more enjoyable. Legendary Leader comes with one less face for each mode than 32, but the ones he comes with are still fun. 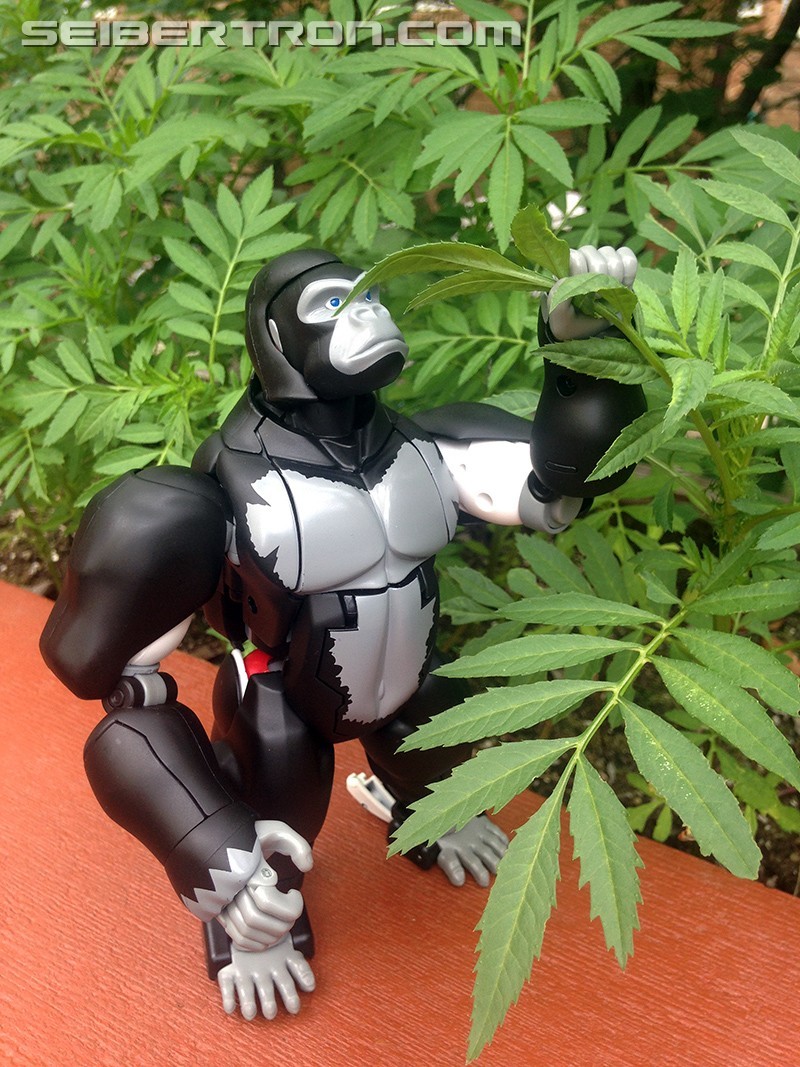 I do have some concern for the finish. He has this beautiful matte finish all over. I fear that it could wear quickly. Matte finishes like this love to show scratches and rubs. Especially in black. You definitely have to handle him gingerly. Keep those nails trimmed, and be careful with those clearances during transformation. 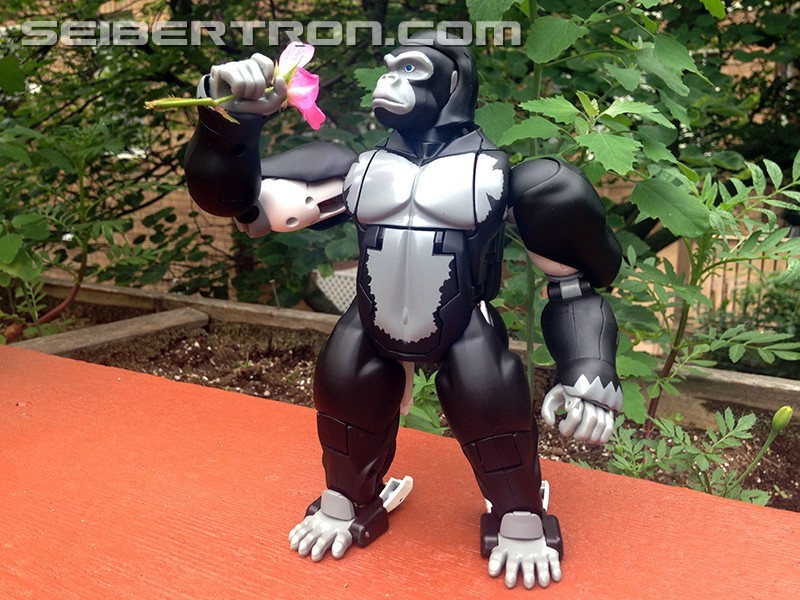 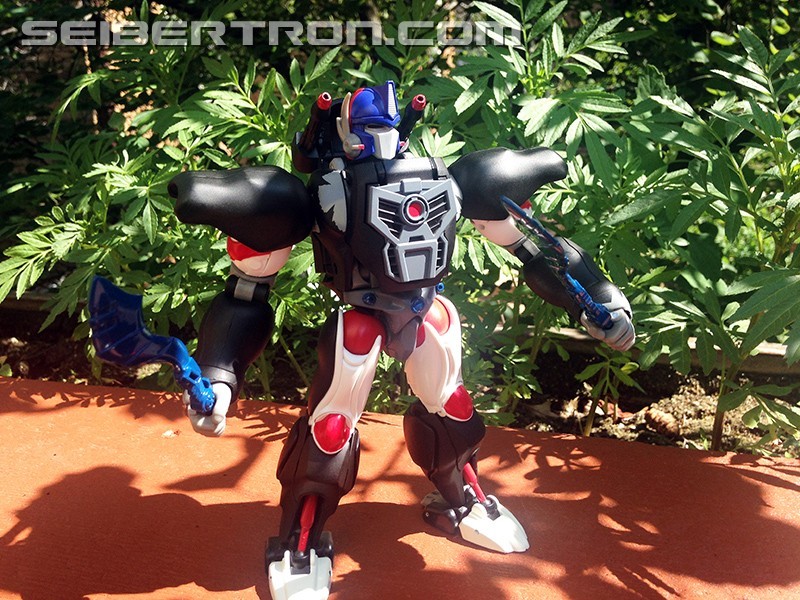 Well now this mode just saved the day! The deco is so true to the original. The transformation was elegant, and not too complicated. I never liked the exposed mouth from the show. This version does come with the optional face, but the first thing I did was slap the muzzle on that monkey maw. 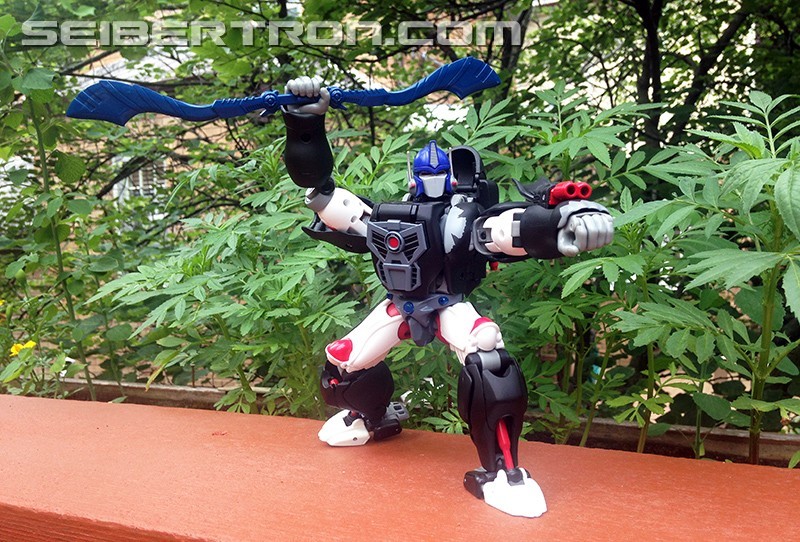 The inclusion of some of the OG toy gimmicks is great. I got pretty excited when I deployed those wrist rockets. He's got all the right weapons to put this homage to work for me.


But the very best accessories? 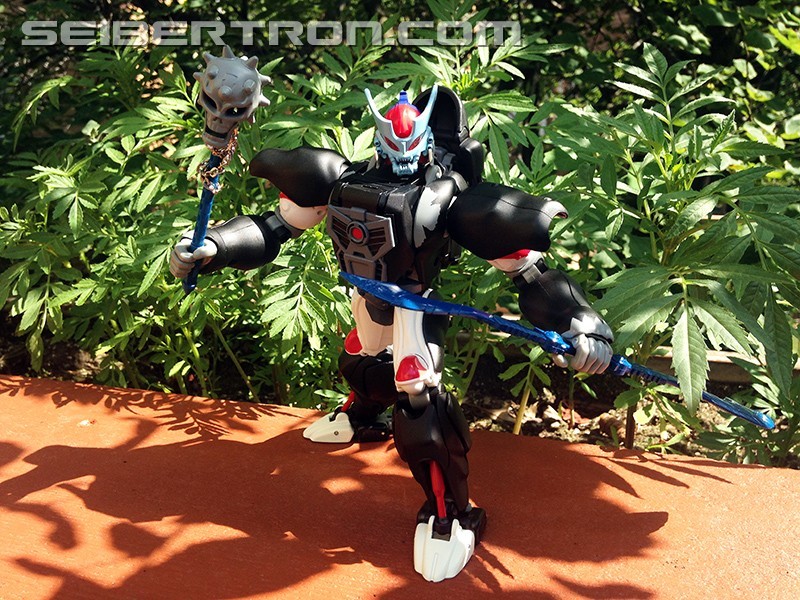 The mask and the morningstar! The mask is TOTALLY RAD!!!! (Yaeh, I said rad) I lost the mask to my original Primal years ago. And miss it to this day. It looks so good on 38, I'm pretty convinced this is how I'll display him. What's interesting is it pegs into the back of his head, which has a translucent window, so the light-up eyes gimmick will still function.
What's AWESOME is the added gnarlyness you get by folding down the bot head antennas to form TUSKS!!! 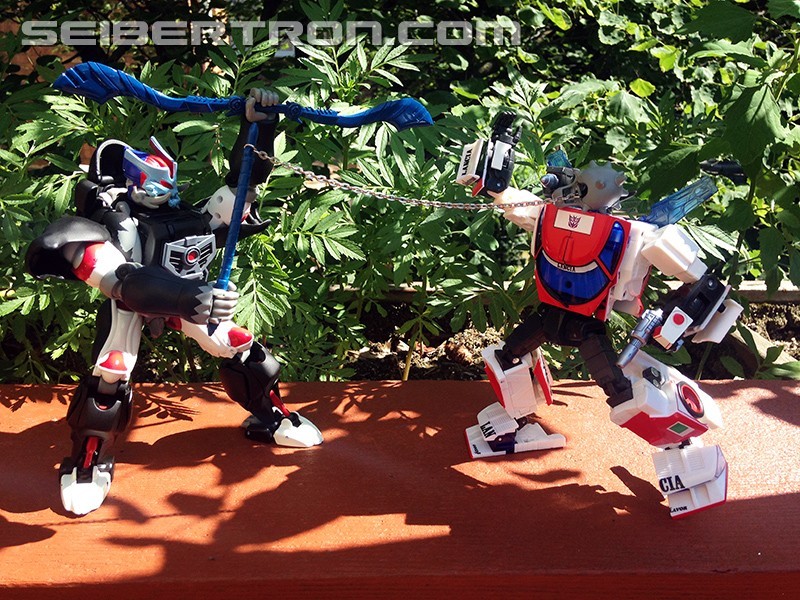 Exhaust! Looks like you and my flail are gonna get in a little FACE TIME! 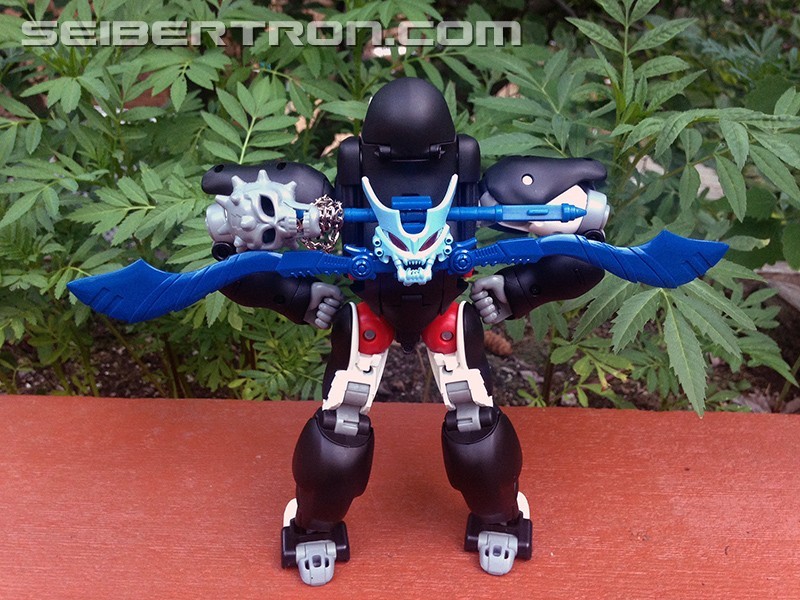 Another added feature over 32 is the weapon rack. You can still stow the separate blades in his back pack, but with this added piece, he can stash all the extras. The conjoined sword looks a tad ridiculous sticking out there, but the mask and flail storage is much appreciated.


Aside from the accessories, some of my Seiber-friends, much better versed than I in TF fiction and lore helped me with a few fun factoids that make Legendary Leader's release different from MP-32.

MP-38 is the first Masterpiece to be released as a Beast Wars 2 character. The box, instructions, and collector's card all sport the BW2 logo, as well as feature artwork from a very specific one-off anime titled, Beast Wars Special Super Lifeform Transformers. While I'm sure Takara wanted to reference the anime with their deco on 38, as they are increasingly needing to do these days, the artists at the studio responsible for the film were most likely directly referencing the original toy's design. Since I'm unfamiliar with this anime, when I look at 38, I obviously see the old, now classic Kenner/Hasbro deco. 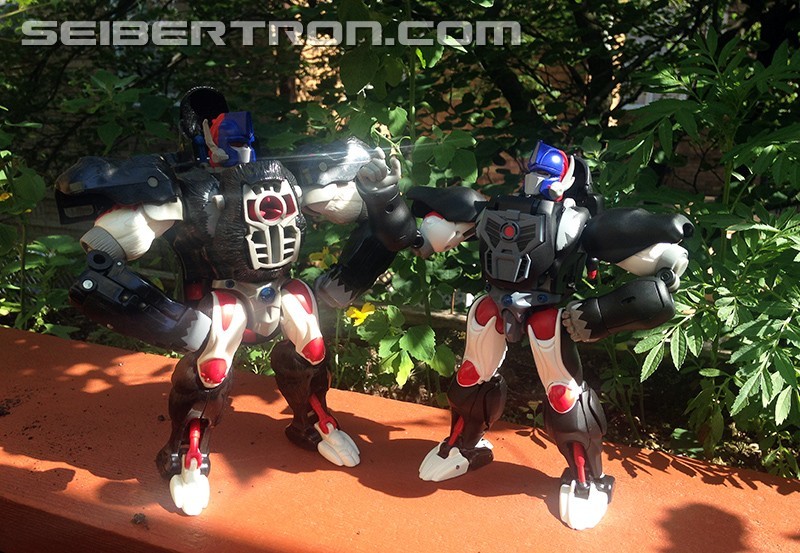 Not bad for an old timer!


Will this Masterpiece version ever replace the original beast's warm fuzzy nest in my primate heart? NOPE! But, 38 is starting to build his own. If cartoon accuracy is your thang, then 32 is allllll-right. But if like me, the buck stops at the toys, 38 is a really great Masterpiece figure. Whether he is to replace the old one your Mom sold at that garage sale, or to be added to your Optimus Primal shelf, he's and outstanding transforming robot toy high-end collectible! It definitely scratched the itch on my silver back!

Rated X wrote:Cant say I agree with the author about toy accurate shiny finish for beast fur. It makes him look like an inflatable float at a parade. To each their own. By the way...Wheres the bananas he comes with?

Sorry X. Guess I didn't make that clear. The thing I like least about this fig is the smoothness of the body. I would have much preferred he have sculpted fur. But the paint apps and their shapes are what I see as totally like the OG toy.

And I think the bananas are exclusive to the Asia release, not the Japanese. Like all the other little die cast doo-dads that come with MP's, they're an Asia thing.


DecepticonFinishline wrote:Great review, bro! Did you have Henry Doorly in mind when you mentioned the glass?

Totally! Those poor gorillas get so pissed some times. Can you blame them though?
Re: Packaging Images for Masterpiece MP-38 Beast Wars Optimus Primal Supreme (1893726)
Posted by Sabrblade on July 1st, 2017 @ 11:19pm CDT
Are you kidding me, Takara!??! You couldn't bother to correctly translate 総司令官 (Sōshireikan) as "Supreme Commander", opting instead to go with the much less impressive, far more simplistic , inaccurate translation of "Leader"? That is so royally dumb, Takara.

Sabrblade wrote:Are you kidding me, Takara!??! You couldn't bother to correctly translate 総司令官 (Sōshireikan) as "Supreme Commander", opting instead to go with the much less impressive, far more simplistic , inaccurate translation of "Leader"? That is so royally dumb, Takara.

Their English isn't up to scratch, remember? Look at the titles for the Unite Warriors sets. Plus, the rough basic idea is still present.
Click here to view additional comments about this topic at the Energon Pub Forums ...