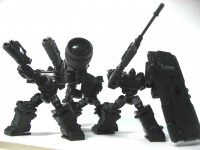 3rd Party company Perfect Effect have new pics on the upcoming SFX Team! And they are definitely packing. So watch out, they are no pushovers!

That South Korean studio that used to rip off every Japanese robot/spaceship/character design they could get their hands on in the late '80s needs to do a remake of 'Solar Adventure' that steals this Reflector's design. The aliens their commie neighbors have teamed up with this time won't even know what hit 'em!

Making the 3-barreled vulcan from his tripod was an awesome idea; that means you can fold the barrels out slightly so he can widen his line of fire into an anti-aircraft death-spray.
Re: Perfect Effect SFX-03 BULLET Pics (1173841)
Posted by Mkall on January 26th, 2011 @ 8:57am CST
The tripod forms a gatling gun
The lenses form a jetpack

But, I can't help but hope for a DL Reflector set with a real (albeit low quality) digital camera!
Re: Perfect Effect SFX-03 BULLET Pics (1173850)
Posted by Ultra Magnus on January 26th, 2011 @ 9:25am CST
SO awesome! They're like the Mayhem Attack Squad! I'm an Autobot, but the Decepticons sure do have a bunch of sweet characters!

Re: Perfect Effect SFX-03 BULLET Pics (1173913)
Posted by MGrotusque on January 26th, 2011 @ 12:05pm CST
I'm shocked at how excellent these guys look. They're amazing. Well done PE!! well done. There's some heavy artillery there too. These guys look like quite the force to be reckoned with.

Now for the price. Please keep it reasonable

But I have a feeling that the price is gonna kill me. I may have to just make due with the Perceptor remold.

1) Show accurate lookalike robot modes
2) Wonderful camera mode.
3) Highly articulated figures with every camera part serving a purpose
4) Are not Decepticons which combine with an Autobot

Seems like a winner to me! I gotta say I'm impressed here.
Re: Perfect Effect SFX-03 BULLET Pics (1174161)
Posted by synthetik on January 26th, 2011 @ 9:57pm CST
Wow, this set is ridiculously sexy. PE PLEASE take your time on releasing these
Click here to view additional comments about this topic at the Energon Pub Forums ...