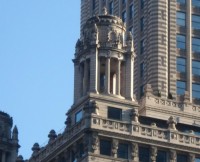 Appreciated forum member Hausjam provides us with new info and images from the Chicago filming a few days ago. Below are his pictures and video from the action:

hausjam wrote:I happened to be staying downtown this weekend. As luck would have it, priceline put us at the Wit on State and Lake. TF3 closed off Wacker between State and Wabash, and Wabash between Wacker and Lake. So we were literally right next door to filming all weekend. It was difficult to get good pictures because security kept forcing everyone to keep moving and telling everyone to take pictures while you are walking. It was rather exciting though, considering I had not even planned on visiting the set while I was downtown.

Tyrese and Josh Duhamel crouching for cover during an action sequence: 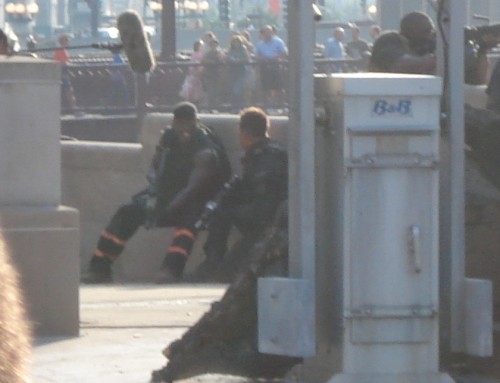 Another shot of Josh during an action shot: 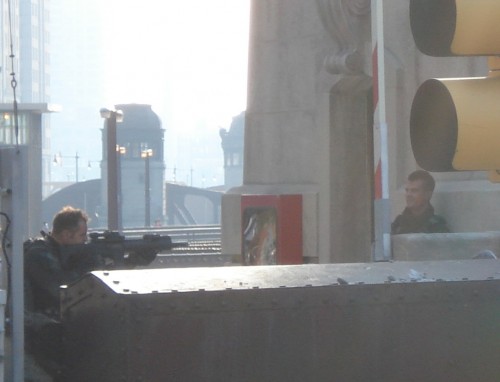 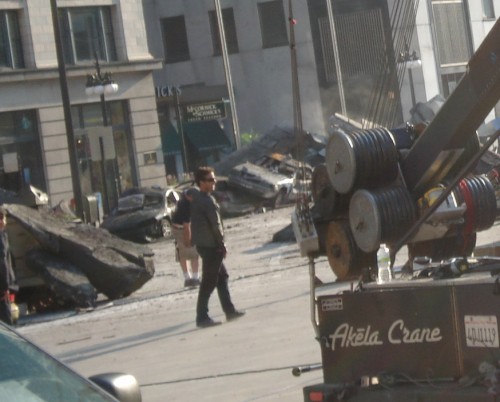 Shia and Patrick Dempsey with the NEST guys: 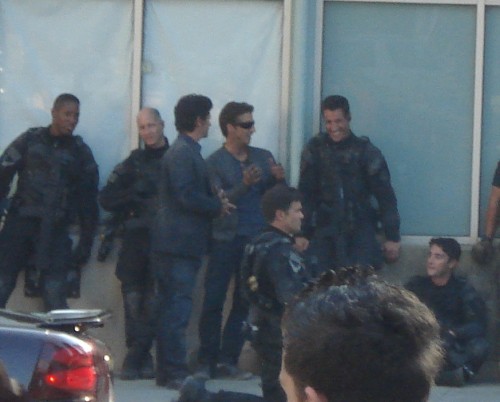 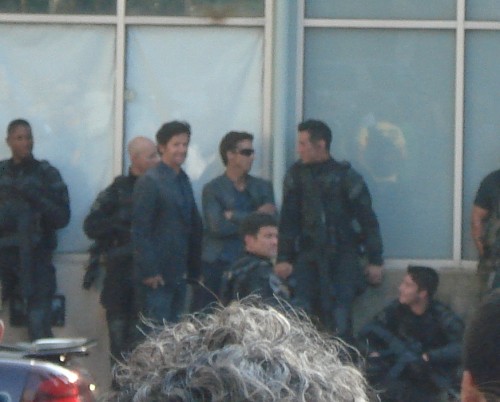 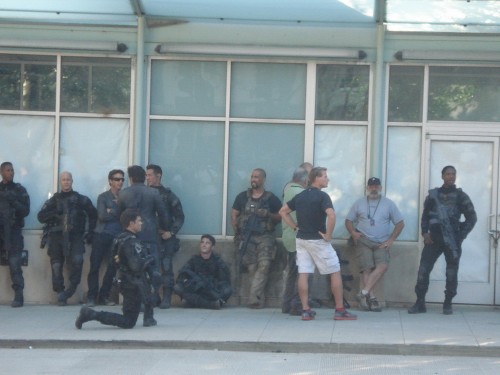 Tyrese was done for the day, so he came across to say hi to the crowd: 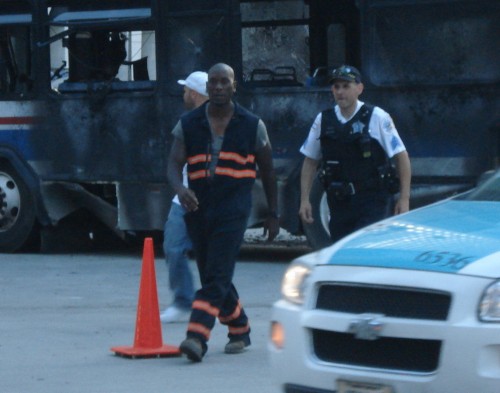 He hopped in the car and gave a "hoo-yah" to the crowd as he was driving away: 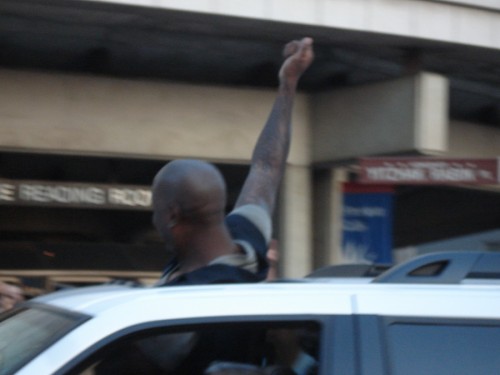 This is the Unitrin building on the corner of Wacker and State: 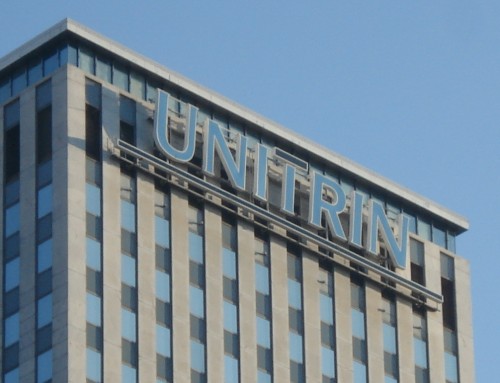 You can see the letters here scattered on the ground among the debris.
It stands to reason that some Decepticon will take out the top of this building and make the letters come crashing down. 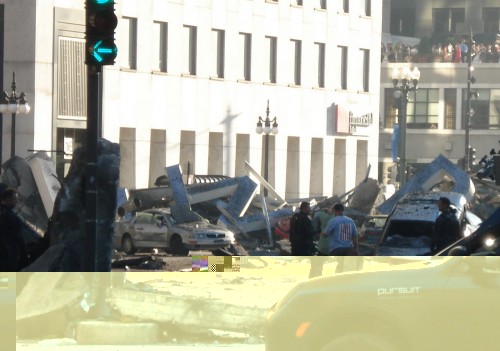 This is an ornamental spire on top of the building on the corner of Wacker and Wabash: 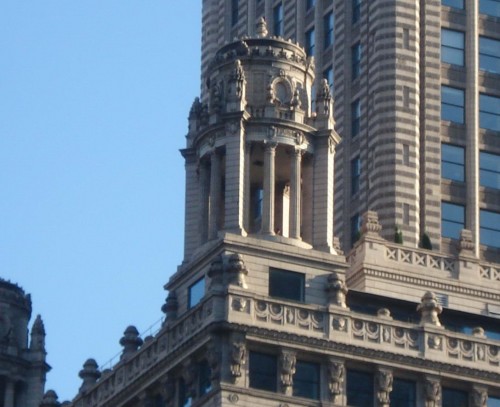 And notice it matches this debris laying on Wabash. This is the prop debris Patrick Dempsey was photographed on top of a few weeks ago during filming: 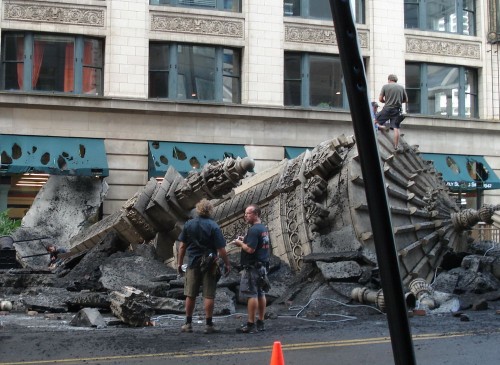 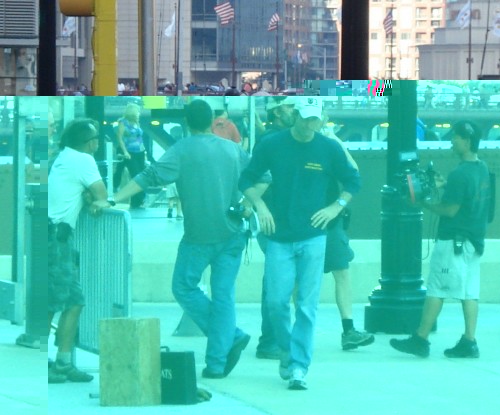 He kept pacing, contemplating something: 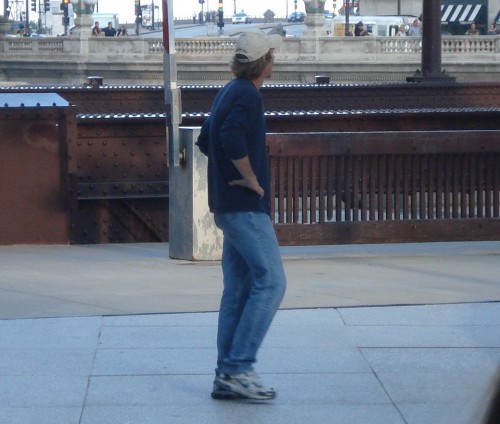 Then he grabbed a camera, and started filming the take himself. He really is a "hands-on" director: 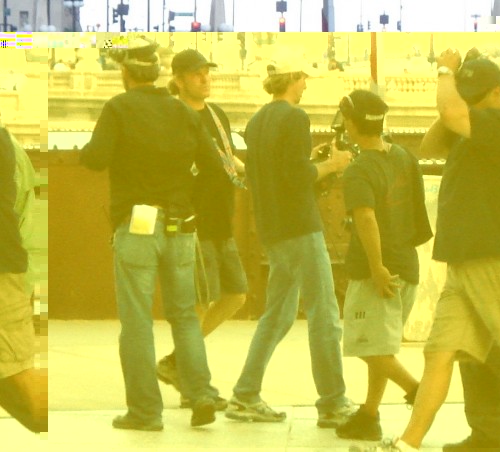 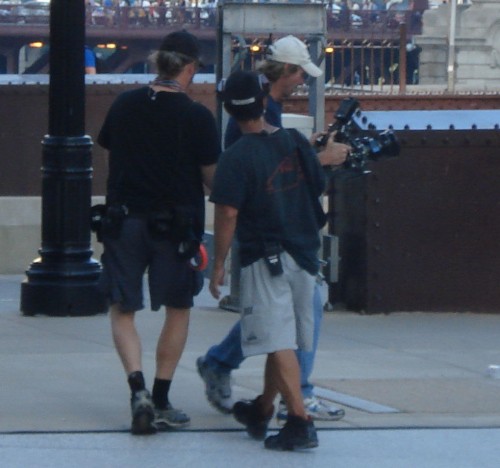 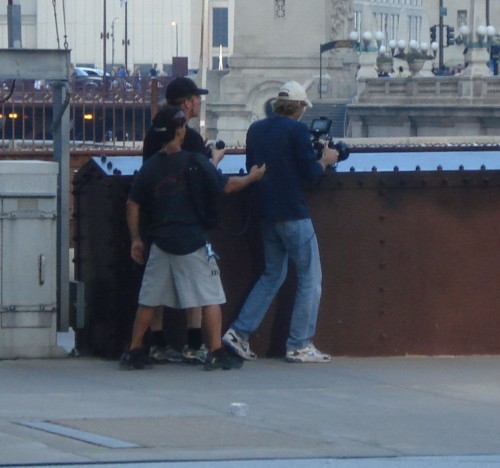 This is the action sequence that followed. They roll camera around 1:05. It's over a minute straight of gunfire. If you watch closely, you can see Bay walking across the bridge with his handheld camera. He followed the Pursuit camera car that raced across the bridge just ahead of him.

Now, judging by the above description, the above photos of Lennox, Epps, the NEST guys crouching behind the bridge and then popping up and firing (which I was not able to get a picture of), and then the fact that the NEST guys were shooting up in the air (and an earlier youtube video I saw showing Bumblebee racing through debris on Wacker right next to this scene) I am thinking Bumblebee races across the bridge with a Decepticon in pursuit and the NEST guys pop up and ambush it. This is simply my conjecture though.


I cannot wait to see the movie, because I am a lifelong tranformers fanatic, but also to see the set on the big screen after seeing it in person, and to see if my conjecture of this particular scene is correct!

I'm getting more excited about this movie by the day now. Weird how that Unitrin sign is spelled very close to Unicron...

Re: Pictures and Video from July 31st Transformers 3 Filming (1107653)
Posted by hausjam on August 2nd, 2010 @ 10:39am CDT
It's definitely going to be really cool to see this action scene, being it is right on the Wacker curve near Michigan. I didn't really want to visit the set because I knew it was going to get me all fired up for this movie. Now I can't wait. I have to blame my wife for that.

marshall dusty wrote:you damn geek!!! hahaha. jk dude
awesome pics my friend. can't wait for this. especially fo the fact that it's chicago where i live, it'll be destroyed.

Actually, I really am a geek

This is my car. I regret not having driven downtown, because now I wonder if it could have gotten me onto the set

marshall dusty wrote:you damn geek!!! hahaha. jk dude
awesome pics my friend. can't wait for this. especially fo the fact that it's chicago where i live, it'll be destroyed.

Actually, I really am a geek

This is my car. I regret not having driven downtown, because now I wonder if it could have gotten me onto the set

Dude, that is awesome! When I saw ROTF at the cinema at the midnight first day showing (STaines,U.K.) there was a g1 Jazz parked right outside. I can't drive but I was really tempted to steal that car...