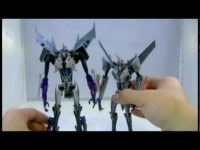 YouTube user mrtbone81 has given us the first video review of Transformers Prime Robots In Disguise Voyager Class/Powerizers Starscream.

Click here to view the video or embed above to check out this highly anticipated figure. After watching, feel free to join the discussion and add your comments on the figure.

1) That back-kibble is hideous >.>
2) I dont like the fact he's the same height as Megs.
3) The FE version is far superior in terms of bot mode.

It's ironic that the Deluxe version does a BETTER job of hiding the legs in alt mode. And that weapon is such a waste. It's a terrible weapon for Optimus and looks even worse with Starscream. And what's with all the kibble on his feet? Ugh.

Cons:
Fake chest cockpit (real one is on his back), foot kibble, wing kibble, back kibble, translucent arms, out of scale with other figures, out of proportion with character model (god, those munky arms), awkard face mold, horrible powerizer, worse than FE mold at hiding legs.
Re: Powerizers / Voyager Class Starscream Video Review (1373718)
Posted by Solrac333 on April 27th, 2012 @ 11:35am CDT
I feel these reviewers are being too kind with these RID figures. It sounds like they are trying to convince themselves that they did not buy a piece of crap figure. Mech techs look really bad, mech tech holes covering the figures, terrible powerizer plastics in random places, VOYAGER figures are now basically over sized deluxes and legends figures. None of the old classics and even movie voyagers have ball joint limbs. These plus the smaller sizes and the price increase (Target had deluxes for $16 and voyagers for $24 now) is bringing me closer to ending my collecting.
Re: Powerizers / Voyager Class Starscream Video Review (1373740)
Posted by noodles2go on April 27th, 2012 @ 12:49pm CDT
As much as I dislike a lot of RiD figures as far as accuracy and how they pail in comparison to their FE counterparts, I have to say I'm surprised each time I open up one of these guys. As far as toys, they are pretty fun. Quick transformations and decent articulation, perfect for the younger crowd... I just wish they had the FE still available for the collectors. I have little faith Hasbro will re-release them despite their claim that they will revisit the possibility in the future. If anything, they'll re-release them with stupid redeco's like "battle damage".
Re: Powerizers / Voyager Class Starscream Video Review (1373744)
Posted by Actar on April 27th, 2012 @ 1:08pm CDT
Huh... I might be in the minority, but I really don't think RID Starscream is as bad as many are making it out to be. Yes, he has the clear plastic and is out of scale, but the transformation is complex enough and is accurate to the show model save the feet. Not to mention, the jet mode is looking much, much better than the FE one in terms of being far sleeker and better proportioned. Speaking of the back kibble, I really don't see how this one is worse than the FE.
Re: Powerizers / Voyager Class Starscream Video Review (1373745)
Posted by Autobot032 on April 27th, 2012 @ 1:09pm CDT

noodles2go wrote:I have to say I'm surprised each time I open up one of these guys. As far as toys, they are pretty fun. Quick transformations and decent articulation, perfect for the younger crowd...

Ehh...not quite. And that's the problem I have with PRID figures. First Edition figures are rather complex, especially compared to PRID, but PRID figures tend to have a complexity all their own.

They're very fiddly and I'd imagine that can be a chore for some kids, as well. For example, Knock Out. Great figure, but he has two transformations, and both are a pain to get the first time.

There's the official one (which is just an absolute mess, in which hardly anything locks together and secures itself) and then there's this one:

^ THIS is the correct way to transform the figure. In fact, everything fits so well, you'd swear this is what was actually intended, but at the last minute, they decided to dumb it down. Which can ruin an excellent figure. Knock Out is an excellent figure. Perfect? No. But he is absolutely sechsy and he knows it. (His unofficial anthem, btw.)

I really can't understand why Hasbro/TakaraTomy would scrap pre-existing molds to create these when some of them can have just as much complexity as their FE counterparts. Starscream's transformation might've been simplified in some areas, but extended and made ridiculous in others.

Logic, do you have it HasTak?
Re: Powerizers / Voyager Class Starscream Video Review (1373791)
Posted by Doubledealer93 on April 27th, 2012 @ 4:10pm CDT
i take back all the mean things i said about this guy! I WANT!!!!! he would be more3 in scale to arcee and some other autobots. and he just looks awesome! i love my first edition and all but, i love the voyager too!!!!

Re: Powerizers / Voyager Class Starscream Video Review (1373910)
Posted by Sodan-1 on April 27th, 2012 @ 9:40pm CDT
Yeah, it's not a bad figure but I don't think it should replace the First Edition. I'll agree that he's too big as a voyager. In jet mode, the front of the figure looks out of proportion with the back, like forced-perspective was built in to the figure.

omega666 wrote: These plus the smaller sizes and the price increase (Target had deluxes for $16 and voyagers for $24 now) is bringing me closer to ending my collecting.

The higher prices are due to the weak USD. We've been paying $16.99 for deluxes and $29.99 for voyagers in Canada for as long as I've been collecting. However, the smaller sizes do suck.

As for Powerizer Starscream, I freaking love it, and I already have the FE version. The leg kibble is atrocious and I'll pretend he doesn't even come with the mechtech weapon, but I really love the look of him in both modes. Super sexy jet mode and impressive looking bot. I just can't display him with the rest of my Prime figs because he's too big, oh well. Good thing I have a Powerizer Prime I got CHEAP to trade. One more thing, I'm glad the hips are not ball joints, but it's unfortunate the shoulders are. Oh well.
Click here to view additional comments about this topic at the Energon Pub Forums ...