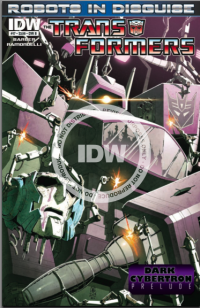 The last we saw ‘ol Shockwave had become noticeably absent during the whole of the end of the events that had been ROCKING the pages of ROBOTS IN DISGUISE.

Where had he gone, and for what purpose might he have gone there? This issue reveals ‘some’ as we learn more of the frightening history of one of the baddest cons to bear the pointy-eared badge. The prelude to DARK CYBERTRON is here!

I’m going to make this short. Succinct. I believe that each of you who are loyal readers of RID and probably the sister series, More Than Meets The Eye, deserve to read this without having much, if anything, given away. And for those who gave RID a chance, and based on the wrap up of recent events last issue, decided that you may just be giving it up because it’s not ‘your cup of tea’, well, if you don’t get this issue, you’ve picked the wrong place to stop. Do yourself a favor, and continue at least through this issue.

This story connects to many events and people that have been a piece of IDW G1 all the way back to INFILTRATION and up until the most recent issues of MTMTE and RID. It continues to explain events that happened to Shockwave as ‘Shadowplay’ concluded, and builds more of his history prior to this huge event, and after, and what you find out about the big, purple, cannon-armed robot is sure to surprise, and I believe, not disappoint you. Jhiaxus, Crystal City, combination, empurata, Dai Atlas, synthetic energons, and a corrupt Senate, all get a cycloptic soliloquy (with some totally unnecessary dialogue from others) and it’s pretty amazing all that one robot sees when his vision becomes ‘impaired’ and his prior tendencies get deleted and replaced. The art is by Livio Ramondelli, infamous for his very recognizable style, and would be in my opinion, the biggest drawback of the issue. While it serves the purpose for storytelling, the difficulties that Livio’s Transformer critics have pointed out are once again on display here. A very beautiful 1/2 page panel can be followed by a very muddled, unclear smaller panel. Livio seems to have earned himself a solid position on the IDW Transformers starting team, and as such, I think he is gaining more and more fans, as they appreciate his take on Transformers, much in the way that these fans appreciated the work of Don Figueroa, Pat Lee, Guido Guidi, Andrew Wildman, Dan Khanna, and Jae Lee as they all took a turn at interpreting the Autobot and Decepticon war. Livio really does a fantastic job at times as referenced on the panel below, where once again current creators pay homage to those that paved the way. But at other times, well, perhaps you feel a little visually challenged like I do. Still the art supports the story well enough though that you will certainly find enjoyment in reading about how scissor-like digits became a laser cannon of destruction.

Don't miss one of the most fascinating character transformations in Transformers history. This book is a necessary purchase for a story that has been a long time coming and only barely begun! Posted 3 days ago
News Categories: Toy News, Movie Related News, Cartoon News, Comic Book News, Site News, Rumors, Event News, Digital Media News, Collectables, Sponsor News, Game News, Site Articles, Store News, Company News, People News, Press Releases, Reviews, Sightings, Unlicensed Products News, Auctions, Transtopia, Interviews, Knock Offs, Collector's Club News, Editorials, Heavy Metal War, Podcast, Contests, Book News, Top Lists
Click here to post your comment about this news story!
Re: Prelude to Dark Energon- Review of Transformers Robots in Disguise #17-Shockwave--It's...shocking! (1489262)
Posted by sabrigami on May 21st, 2013 @ 9:52pm CDT
Well, I wasn't going to pick this up to be honest. This review has given me a little hope. I hope it proves to be worth the price of admission. I am losing faith that this series can hold itself together much longer. there are a lot of holes that I fear can't be patched. I look forward to hopefully being proven wrong. You certainly can't go wrong with Shockwave

The second problem has been the lack of overall action in these books. The characters spend most of their time talking about being Transformers rather than fighting. It's boring.
Re: Prelude to Dark Energon- Review of Transformers Robots in Disguise #17-Shockwave--It's...shocking! (1489349)
Posted by CaptainMagic on May 22nd, 2013 @ 10:09am CDT
Honestly, the story in this issue is every bit as good as the review claims, but the art is just about enough to ruin it. The colors are the only part of this guy's style that really look good anyway, since all of the line work is just all over the place in terms of perspective and scale. Plus, everybody looks flat. They just look like a big stack of boxes walking around and I hate it.

I enjoyed this issue, though I do think there are problems with Dai Atlas' demise and some continuity overall. The story was well told, Barber played some nice self-patching cards, and the art was clear (compared to previous stuff, like Chaos).

Glad that people are coming back to the series, too, it deserves to be followed more, even if not always as good as MTMTE for some aspects.

EDIT: Re-reading it, I have another point to make. While it is nice to expand on the story after Shadowplay, I think the latter was so powerful when it came out that it almost stole this one's thunder. Anyone else feel that?