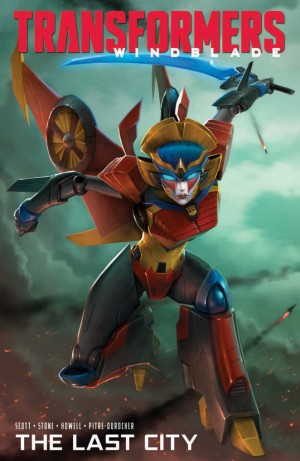 Our main preview this week for IDW Publishing Transformers comics - as Optimus Prime #15 was shown here last week - is a collected volume that sees the previous Windblade series all in one place, including the initial four issues, and the seven issues of Windblade volume 2 - with art by Sarah Stone, Corin Howell, and Till All Are One regular Sara Pitre Durocher, along with Marcelo Fereira, Livio Ramondelli, and a whole host of colourists, letterers and inkers, all with writing by Mairghread Scott.

Take a dive back into the past, way before the Titans returned, Swindle disappeared, Starscream knew better, and Windblade realised who she actually was, and pick up the book in the coming weeks if so inclined!

Transformers Windblade: The Last City
Mairghread Scott (w) • Sarah Stone, Corin Howell, Sara Pitre-Durocher (a) • Sara Pitre-Durocher (c)
The original fan-made Transformer stars in her own series. She cuts straight to the truth and no obstacle is going to stand in her path. Windblade is a force for good, who never fails to do the right thing. But what happens when she's forced to work with Starscream to recruit new colonies to the Council of Worlds? Collects both the four-issue and seven-issue Windblade mini-series.
TPB • FC • $24.99 • 220 pages • ISBN: 978-1-68405-224-0

Bullet points:
· Advance solicited for February release!
· “This is not your average Transforming Robot comic book, this is so much more!”—Big Glasgow Comic Page 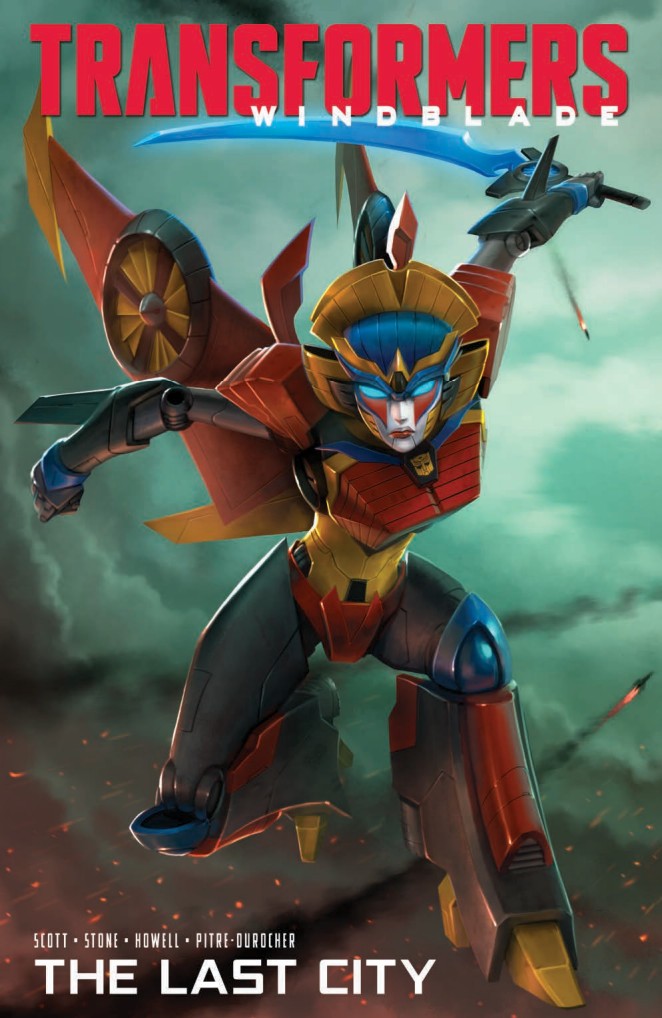 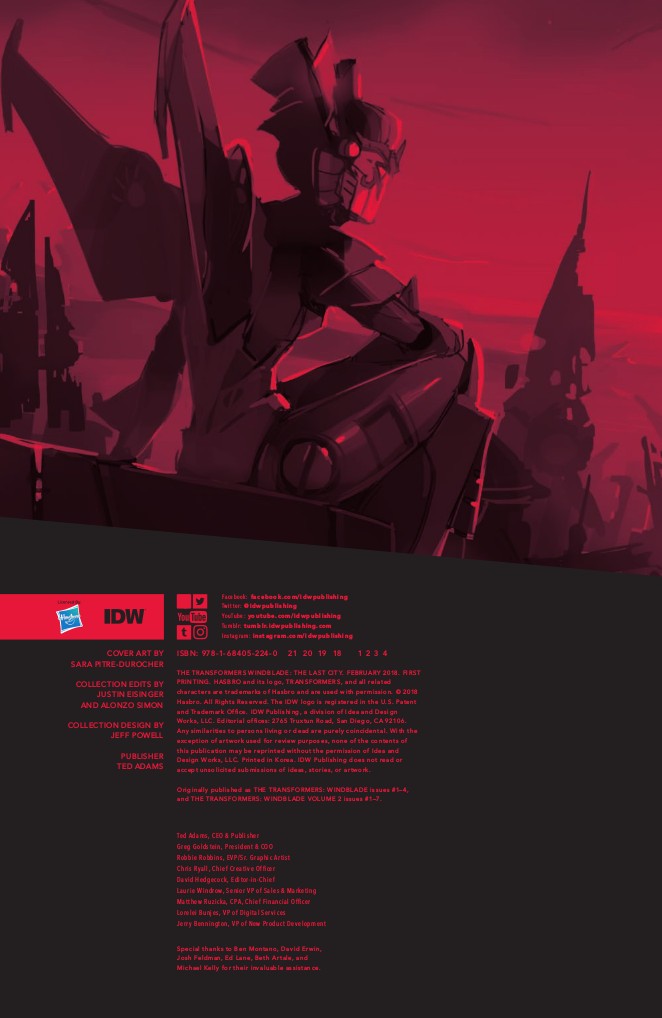 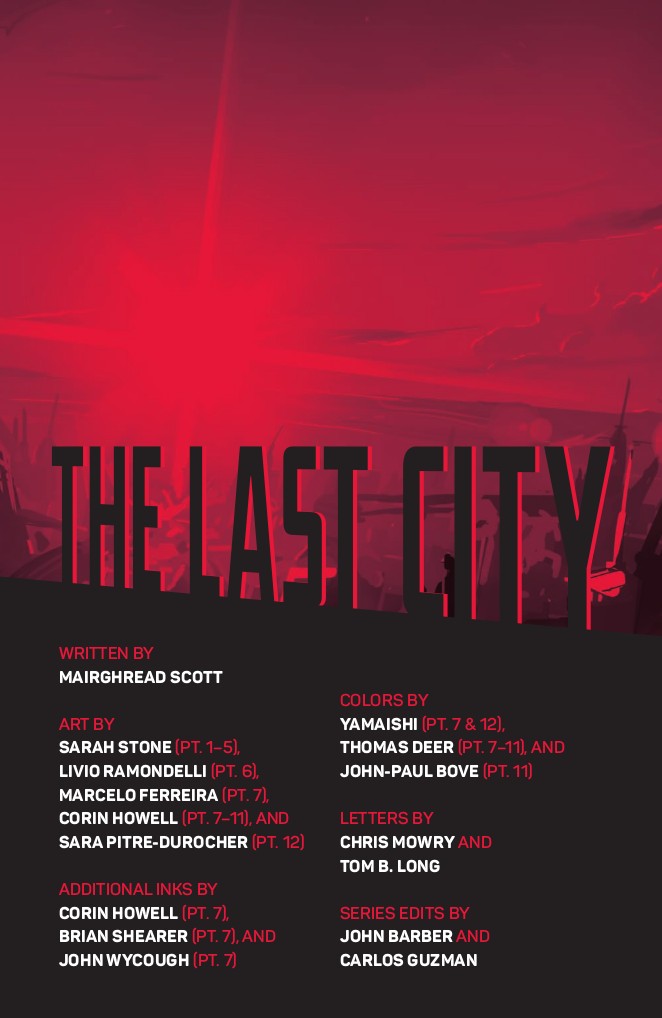 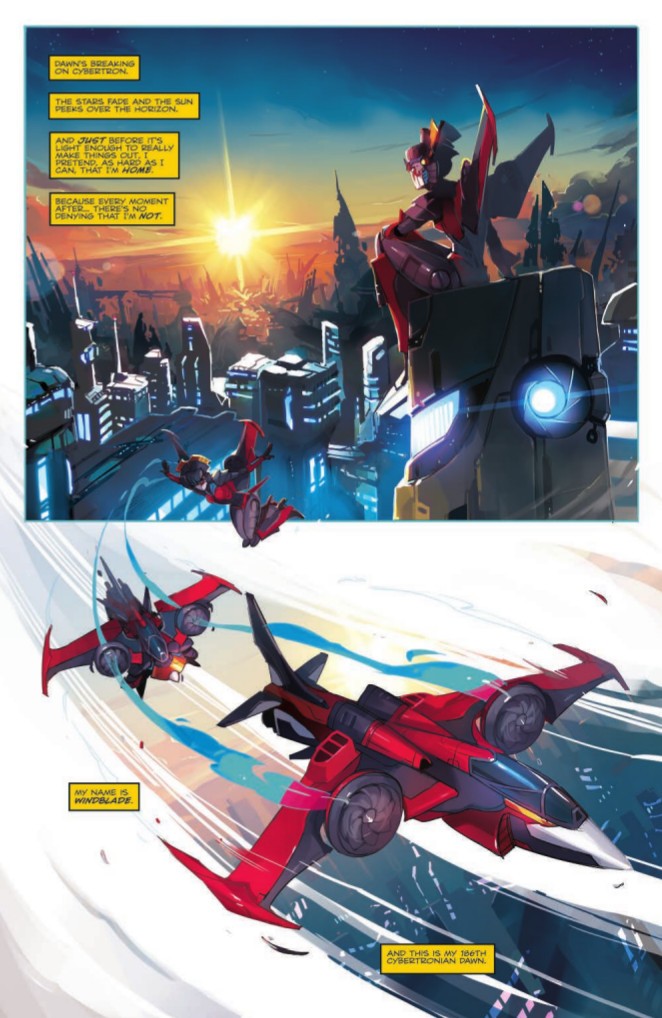 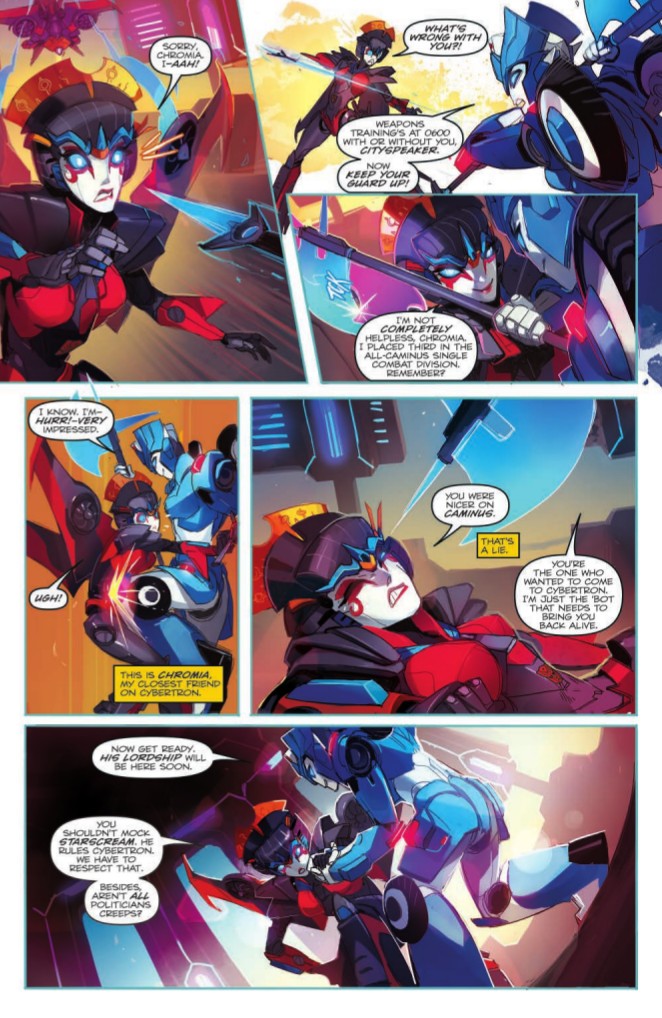 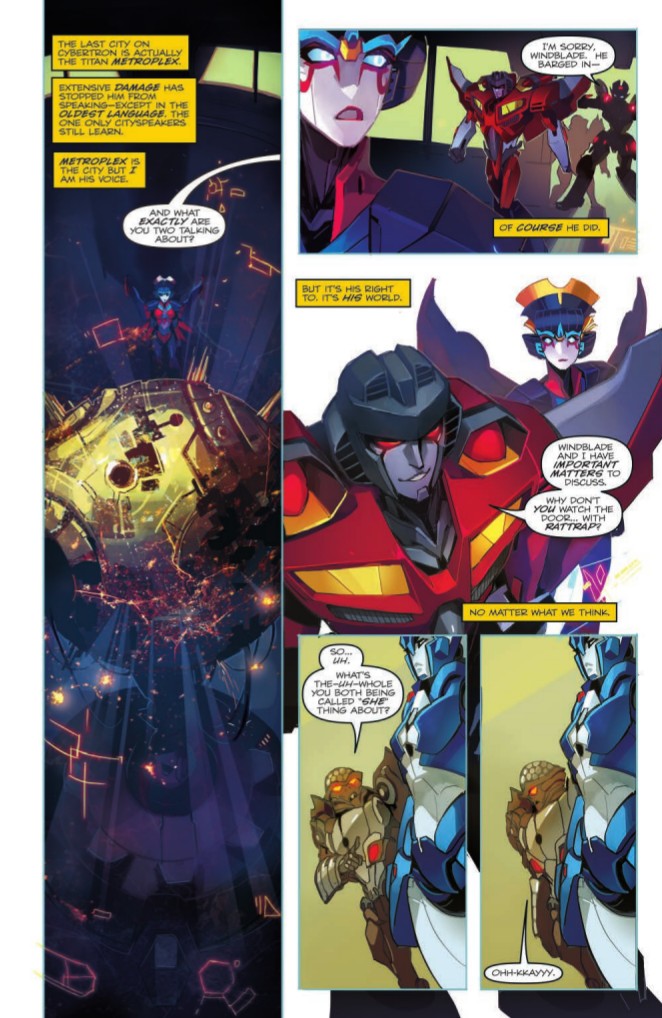 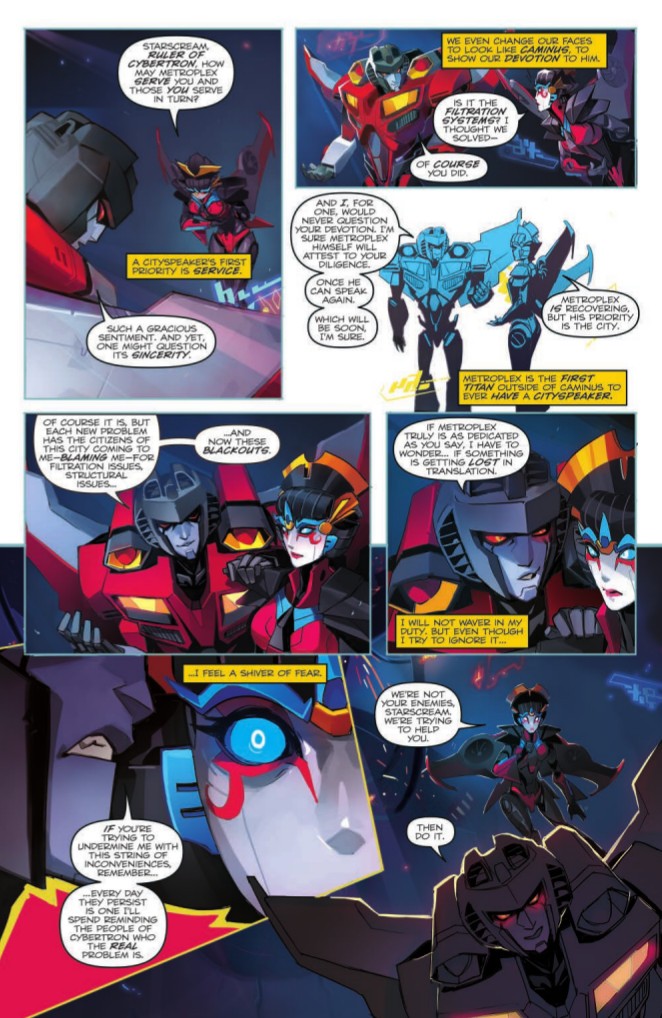 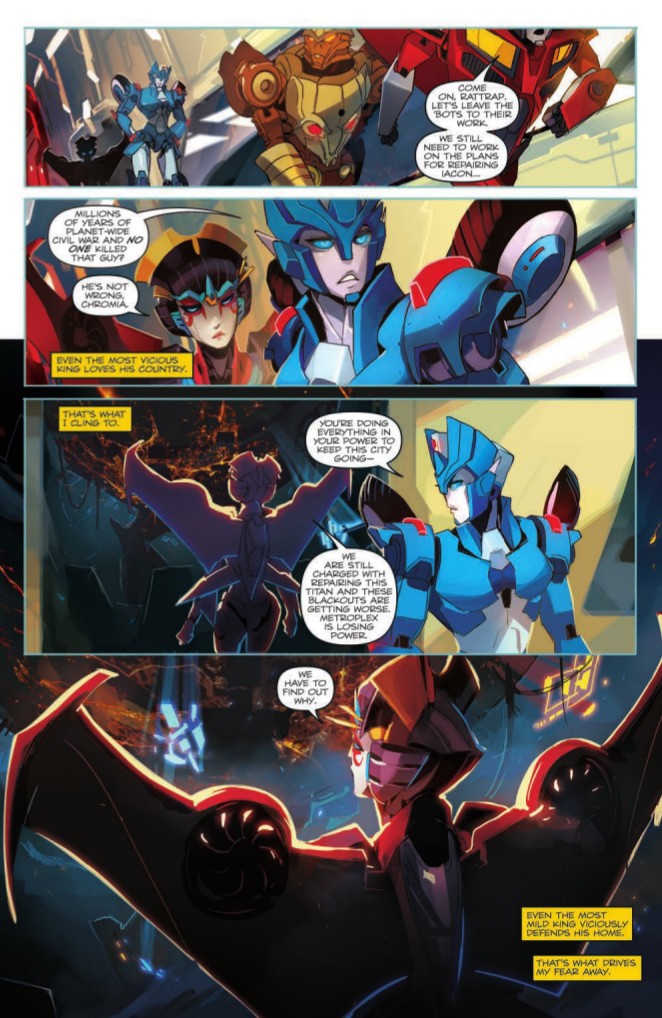 I still consider this to be one of, if not the, most gorgeous pieces of Transformers artwork of all time.
Re: Preview for IDW Transformers Windblade: The Last City TPB (1950247)
Posted by starfishy on April 2nd, 2018 @ 4:02pm CDT
My only familiarity with this character is in that silly transformers earth wars mobile game. I had no idea Windblade was a fan-created character though, kind of wicked.

Sarah Stone’s art looks fantastic, will pick this compilation up when it comes out.
Re: Preview for IDW Transformers Windblade: The Last City TPB (1952780)
Posted by WreckerJack on April 14th, 2018 @ 3:21am CDT
I just finished the last city and I really enjoyed it. It's the first windblade book I have read so now I need to figure out what will come next. I'm probably going to wait until there is another volume out since I prefer those to individual comics.

Anyways it's time for bed. I want to read more but I should be asleep right now.