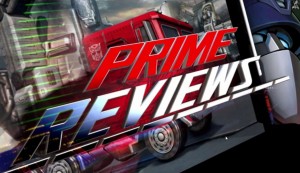 It's been a while since we last saw him, but Optimus Prime (voiced by our very own podcaster, forum member and professional voice actor jON3.0) is still at his reviewing antics! This time, join him as Wheeljack shrinks him down to review the Rescue Bots Action Figures - Optimus Prime, Bumblebee, Chase and Heatwave with their human partners. Check out the embedded video below!

Re: Prime Video Review: Transformers Rescue Bots Action Figures (1539416)
Posted by Bumblevivisector on January 4th, 2014 @ 9:43pm CST
Given Op's disdain for Gloryhog Bumblebee, I'm surprised he just dismissed Bee's energize appendage as a "drill-arm-thingamadoo" instead of ragging on the fact that he has a blue FLATHEAD SCREWDRIVER for a left hand, the one nonsensical weapon/tool on any of these minifigs. I can't see Cybertronian tech having that many screws that large, let alone Griffin Rock. Jon could've pried open a comedy gold mine with it, but Op's confusion over Graham being partnered with him is understandable. No mention of Heatwave being paired up with Dennis Leary, probably 'cause that's too obvious.

Due to show inaccuracy, I can't justify buying any Rescue Bots larger than this (No, not even Blades, whose original toy actually looks cooler than his cartoon self), but I already have these 4, and the 2 newer ones, and I'll get a second of each next time they go on sale so I can go the full Zobovor and give each one a proper left hand. Extra human parts will be used to Frankenstein a Dani, assuming they don't make her; with my luck, they'll package her with a Morbot as soon as I'm done, paving the way for an army of her to be amassed. From the rest, I could make an RB GB Blackrock, and maybe even Robot-Master and Circuit Breaker if I hacked up figs from the G.I. Joe and Squadie lines.

Nice to see these guys get some Prime Reviews love.