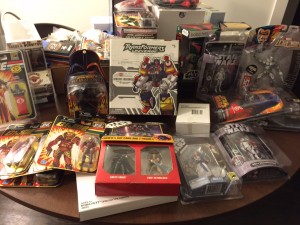 Joe Moscone, affiliated with Hasbro and the Transformers brand for a long time, and who stepped down from his position not too long ago, reached out to us to promote his current fundraising auction for cancer charity Receptions for Research. Moscone is putting his accumulated Hasbro items, from SDCCs and more, entirely up for grabs, with all proceeds going to the charity organisation - and the lot includes the likes of Mighty Muggs, Kre-O Class of 1984, 25th Anniversary Optimus Prime, PCCs, Universe Sentinel Maximus with Ape-Linq and several non-Transformers items such as G.I. Joe, Star Wars and more! Check out the letter he sent us, take a peek at the photos below, and head here to start bidding, and do some good.

I wanted to share details of our eBay charity auction with you. If you’re able to spread the word with your friends, readers and/or social media followers, we will be eternally grateful. Of course, if you want to bid on items yourself, have at it!

What it’s all about…

Since 2010, I’ve supported Receptions For Research: The Greg Olsen Foundation, an incredible organization devoted to providing hospitals, doctors and scholars across the nation the resources necessary to treat and enrich the lives of those affected by various forms of cancer and cardiovascular diseases.

This year, we’re introducing an auction into the fundraising mix to try and raise even more money for this wonderful organization and build on the nearly $59,000 we’ve raised since 2010. I think we can do it with your help!

Through mid-June, we’re auctioning a variety of toys and collectibles from my personal stash. I gathered all these items during my many years working with Hasbro’s Entertainment Brands. 100% of the proceeds from the sale of each and every item in this auction will go to Receptions For Research. Our plan is to post several auctions through mid-June, each with a new selection of approximately 15-20 items.

NOTE: The eBay page hosting the auction is my girlfriend’s, Caitlin Elgin, who is also part of my fundraising team—the New Jersey Grabowskis. Here’s a link to our eBay auction: http://www.ebay.com/sch/celgin013/m.html

Attached is a list of most of the items to be auctioned between now and mid-June (end date TBD). I’ve also attached a couple of photos that I previously shared on Twitter that show the massive amount of stuff we’ll be auctioning. If you have any questions, please let me know.

Again, thank you for your time and please let me know if you’re able to help us spread the word for this great cause!


Re: Receptions for Research Cancer Charity Auction: Hasbro SDCC Items from Joe Moscone (1796468)
Posted by triKlops on June 9th, 2016 @ 9:32pm CDT
Checked out the items, got my eye on a couple.
If my bids go a lil high, i don't mind as much because its for charity.
Good luck to all bidders.