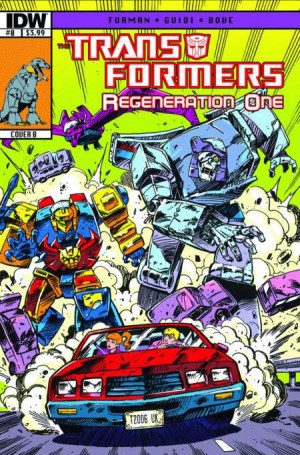 Simon Furman, Transformers wordsmith, has updated his blog with a Script (W)Rap for the upcoming ReGeneration One issue 0. Caution, it does contain some spoilers! Comment below or on Simon's blog directly for answers from the Furminator himself.

This week (Wednesday 18th September) sees the much anticipated release of Transformers: Regeneration One #0, the kind of extra (and extra-special) issue we’re squeezing in between issue #94 & #95. Just how ‘much anticipated’ has surprised even us, despite the stellar line up of artistic talent involved, and the first printing has sold out in terms of its Diamond Distributors orders well ahead of its release. But don’t worry. Supply just equals demand, that’s all. And… there’ll be a second printing hot on its heels — with another variant cover by Casey Coller!! As is usual, even though this is a far from usual issue, my script (w)rap — a kind of writerly digression into everything that went into the planning and execution of the issue — follows, and (also as usual) inevitably contains some spoilers (though these tend more towards teases than out and out spoilers), so be warned. Okay, so, what’s with this extra issue, and why? Here we are on the cusp of the final story arc and suddenly we’re knee deep in a whole adventure in the time stream. Was this planned? Well, yes and no. Originally, much of what you’ll see in #0 would have been covered in some kind of recap fashion during the ongoing narrative. Hot Rod would still have been sent into Zero Space by Primus and emerged… well, that’s a might too spoilery… he’d have emerged anyway. But we wouldn’t have had the chance to really explore the four storylines (past, present & future… or rather, alternate future) that are going to come to bear on RG1 as a whole. Originally, #0 was pitched as an Annual and a chance to bring some more classic Transformers artists back into the spotlight. But it kind of morphed into #0 instead, and now has a very defined spot and role in the continuity. The intent, though, remains the same, and we’ve got Geoff Senior (doing his first interior strip work for I don’t know how long), Jeff Anderson, US TF mainstay Jose Delbo and (representing the newer wave of TF artists) Nick Roche and Casey Coller each providing simply gobsmacking pages, in a variety of styles, for the various segments. Stephen Baskerville provides inks (where and when necessary) and John-Paul Bove is on colour duty throughout (weaving different styles to fit the story and artist involved). Most of all, #0 gave me a chance to delve back into the rich history of the original Transformers comic (US and UK as it turned out) and bring yet more strands and loose ends into the seething mix of RG1. Everything now is thundering towards our final arc, The War to End All Wars, and everything in #0 is some facet or portend of where we’re going and what will happen next. Dare I say it… #0 is about as essential as it gets, and a whole of (retro-) fun in the process. Can’t wait to see what people think. You can check out the official IDW preview here and comment on the issue in this very thread.

ZERO POINT! Adventure in the time stream, as HOT ROD desperately attempts to identify the rogue elements that are leading him, and the entire CYBERTRONIAN race, inexorably towards the catastrophic end of time itself. What hidden stories do the DEATHBRINGER, BOLTAX, BUSTER WITWICKY, and GALVATRON have to tell, and what—if any—solutions are there? Or is it already too late? Down the rabbit hole we go! (Coller)

Taking a step sideways from the events of issue 94, #0 looks at Hot Rod's journey through time to figure out what in Primus' name is happening on Cybertron, now that all seems lost. And what does he find out? A Furman fan-gasm of references, allusions and hints at other continuities, characters and what's to come. This is how we started, last issue

From the teasers, I initially thought it would be disconnected stories focusing on different plotlines and loose ends - turns out Furman had a better idea, and let Hot Rod run through all of them as a witness, learning how to help Cybertron in its time of need. Like a vast, predatory bird, really.

I don't want to spoil the stories at all, even though there is little to spoil for most of them, but Furman's device is really quite good in showcasing and bringing in some of the other projects he's worked on (and so have others) for the franchise.

The overall storyline, connecting the different sections, is actually quite predictable. Which is a shame, considering how much thought has gone into everything else for this issue. The way in which old stories are concluded and explanations given almost makes up for it though.

There are five artists: Coller, Senior, Anderson, Delbo, Roche. One inker, Baskerville, for two of the artists (Anderson and Delbo). Does it work? Yeah. Yeah it does. Coller and Roche are the newest additions to the team, and Roche's style in particular does stand out more in the issue - but it's such a fan-fest that you'll keep on drooling over the pictures anyway. Point in case: Delbo's Buster and the..

And how to make the five-course fan-meal even more appetizing? JP Bove is here to sauce it up. The colours on the different sections are absolutely astonishing, capturing the essence of each artist's style and their location in the Transformers' comics timeline. Senior looks like Senior, Roche like Roche. And the skies look beautiful.

Even if it is junk (Roche)

Mowry's lettering is also pretty good, working in with the spiralling timescape of Furman's story, Wildman's actual spiral design and the various artists in the issue. Yes, Wildman and Guidi are also here, in covers A and B. I mean, come on.

As I said above, the overarching storyline isn't amazing, and is a little predictable. The re-introduction of Jhiaxus is a nice touch, and tying up some loose ends from the old run definitely pays off. But you're not getting this issue for the story, you're getting it for the art and the colours. Because it looks amazing. Seriously, one of the best looking issues so far, with enough newness to counterbalance the oldness, while keeping everything fresh at the same time! So yes, definitely pick this one up, even if you're not reading the series - it's a real treat for new and old fans alike.

After reading issue #0 I went back and re-read a few issues. This is what I am getting, the "crack" that was mentioned previously and the problem is that Hot Rod never was able to become Rodimus Prime like he was supposed to. That is why on his last journey he was not incorporeal but was actually there in an alternate time line where he could get the matrix and finally be who he was supposed to become.
Interesting way to bring RP into the mix now.
Re: ReGeneration One #0 Script (W)Rap (1518881)
Posted by Va'al on September 20th, 2013 @ 8:06am CDT
CTV Atlantic has published an article, including video, about the Giant Robot store (Dartmouth) exclusive cover of ReGeneration One #0, with artwork by Casey Coller and colours by JP Bove! You can read the whole article here, and check out the cover art below.

The latest issue was released Wednesday. Its cover was inspired by an idea from comic book store owner Darrell Wall and completed by renowned IDW comic book artist Casey Coller.

“It is mind boggling,” says Wall. “I never thought when I opened this store three years ago that I would have a comic that’s exclusive to me.” Re: ReGeneration One #0 Script (W)Rap (1519112)
Posted by Va'al on September 21st, 2013 @ 7:13am CDT
Transformers colourist extraordinaire JP Bove has posted an update on Facebook, shedding some insight on his approach to colouring the different art styles of ReGeneration One #0. Check out his comments below! Ahead of issue Zero out on Weds 18th September I wanted to give a little insight into the atypical colouring styles I used for this issue.

From the outset I wanted to evoke the styles of the time where that was appropriate. With the top panel my initial plan had been to colour this the way that Geoff's work had often been done in Marvel UK but the time and place this story was set was meant to be confirming its place in Marvel US so I went for the Marvel US style of block colours and those pesky zip tone dots. In order to get something close to the old look I scanned several old Marvel US pages at high res to ensure that things matched pretty well.

For the second panel above we were dealing with events not previously seen so I had a lot more freedom and I decided to go for the Marvel UK watercolour/airbrush style where it should feel like we can see the medium being used to paint it. No effects, no tricks, just a lot of looking at Target 2006 for the way the streaks for reflections were used (as seen under Hot Rod. As for Rodders well he is coloured RG1 style throughout his journey because he's just an observer... Or is he?

Third panel is Jose's. My initial plan for this section set in the 90's was going to be Image comics style with high gloss, impossibly shiny skin and overloaded with unsubtle effects. That's my memory of 90's comics anyway! Stephen's gorgeous inks took things in a more classic direction so I decided to keep the zip tone look but the palette is very different between Geoff's and Jose's. I also decided that Buster was pretty in pink... That boy didn't vary his wardrobe much.

And last is Nick Roche's panel which as it is set outside of the RG1 universe entirely we went for an Animated Movie vibe meaning black outlines on foreground things with mainly bold colours and painted looking backrounds throughout.

Not only is this the first time I have properly coloured any of these guys, something for which I am still in disbelief about, I also got to work with Casey Coller again, another comic book hero of mine, although in the usual RG1 style.

I hope you pick up the book and I hope you enjoy all the nods!