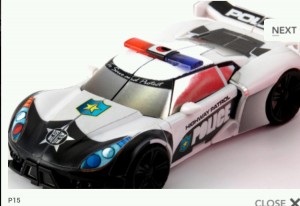 Delta over at reprolabels stopped by to let us know about their newest update, which isn't as small as he might lead you to believe. This rather extensive update makes some of your favorites really shine, such as Beast Hunters Prowl!

Okay, so "Minor" was sarcastic.

In the Prime section, an *extremely* extensive set for BH Prowl:
http://reprolabels.com/Prime/p15.php

And symbols for BH Predacons:
http://reprolabels.com/Symbols/bhpredacons.php

Our work on G1 sets never ends, and this time we have a straight repro set for Skygarry:
http://reprolabels.com/Autobots/skygarry.php

And an enhancement set for more iGear minibots (Outback and Gears):
http://reprolabels.com/Classics/minibots2.php

Finally, our work on a set for the MMC Bovis version of Tantrum met with a lot of initial criticism, so we took another crack at it, trying to follow the advice of some very helpful people.  This is the original "Over The Top" version:
http://reprolabels.com/Classics/tantrumoverthetop.php

And here is the revised version, which we're referring to as the "Minimal Edition", which met with vastly superior reviews:
http://reprolabels.com/Classics/tantrumminimal.php

And for those who missed it, we recently added an add-on set to last update's epochal Titan Metroplex set.  This is for extra tower windows needed by those with two large red guns for Metroplex:
http://reprolabels.com/Classics/metroplex-windows.php

That's it for this minor update!

Mkall wrote:If only the Rodimus Star sticker came as its own symbol set.

Oh, hey! They do have a Smokescreen set. When the hell did this come out?!

Oh, hey! They do have a Smokescreen set. When the hell did this come out?!

Speaking of... I just finished putting the full set on my Smokescreen. Took the better part of THREE hours. They really do strive for accuracy and the tiniest of details. *smh*

The last time I ordered from them was when those G1 combiner bootlegs were available at Big Lots. I used their Bruticus set to finish off the set to make it look as G1 as possible and I was happy with their product.

This time, I'm definitely happy with the product, and the shipping time. TWO days, even with a holiday. Looks like they ship from the US as well. (Impressive.) I could be mistaken, but it seems like a good portion of Smokescreen's stickers are vinyl wrap like the Knock Out set. I mean, there are stickers in the set, the chrome ones for example, but the white parts and some of the blue are plastic and it stretches, which leads me to believe it's vinyl.

It was well worth the price. He looks completely different from what Hasbro sold us.
Click here to view additional comments about this topic at the Energon Pub Forums ...