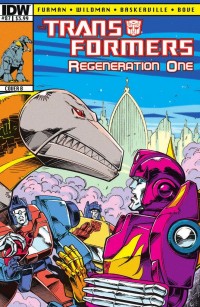 Synopsis
WAR CRY! The conquest of IACON begins in earnest, as SCORPONOK’s game-changing strategy threatens the very nature of what it means to be AUTOBOT... Or DECEPTICON! And HOT ROD begins his own personal odyssey to the very heart of CYBERTRON—where ancient forces are stirring! So. That's the plot

So Grimlock has accepted Scorponok's offer, and is on his way to Cybertron. After a demonstration of what the Gene Key can do, at least. He's back in his old body, happy as larry, bashing and gnashing, and he has a plan to carry out.

Meanwhile, Optimus decides that he'd rather stay on Earth and think things through, thank you very much. I suppose this could have been a worse decision, but it does seem to slow down things a lot. Every other character on the planet(s) keeps asking 'what would Optimus do?' - apparently, nothing. Just go for a stroll. Good to know. But you can abandon everyone on Cybertron. Cool, cool.

And of course, Hot Rod tried keeping everything under control back at home. Even though Grimlock is a bit of a trouble-maker, Scorponok's vanguard has arrived, and there's definitely something going on in the basement. The idea of Scorponok changing the moral compass of all Cybertronians is intriguing, but the execution is a bit puzzling. What exactly does the Gene Key do, and why does it even work? If morality is not a black-and-white thing, as they explicitly said in these issues, surely the result would not be this one? Or would it?

Again, it's Wildman and Baskerville on pencils and inks, respectively, and there's quite a wide cast this time round. Some have complained about the three headmasters not looking like their usual selves, or at least previous incarnations, but they do resemble their toys in this form. The usual concerns about expressions do arise, but there's something particularly off with Perceptor. Bove really shines in this issue though, especially when the skies are concerned. Something I didn't notice on the first read: the Cybertronian sky progresses through this story arc, from a very very dark night to something else for its conclusion, following the pacing of the events. A nice touch, JP.

The artwork seems to work a lot better in this issue! Yes it's Andrew 'Screaming Robots' Wildman, but the human facial expressions have more of a variety this time, and really help convey what is going on in the story. And I like screaming robots, anyway.

The issue is enjoyable actually, and it does a lot more than the previous one. There are some concerns both in terms of plot devices and artwork, such as the exact functioning of the Gene Key and Perceptor. Poor poor Perceptor. But overall, the story works. There are some extra bits I haven't mentioned in the review, about some other characters still on Earth, of whom Starscream is one and the others are ..well, I'll leave it to you to find out. Overall, not a bad issue, a good read, still fairly slow but appropriately so this time. Let's see what Scorponok has in mind for next month, shall we?