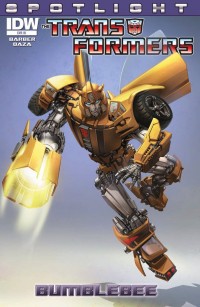 With this week's reveal of the official images of Generations Hoist and Thundercracker, it's time to complete the reviews for the Spotlight series, which now seems to have concluded as far as we know. Read the others so far: Orion Pax, Megatron, Thundercracker, Trailcutter and Hoist.

ESCAPE FROM EARTH! Before Cybertron was reborn—BUMBLEBEE lead the Autobots on Earth. In this untold tale, he must take the reigns of command… and he’s got hundreds of rogue Decepticons standing between him and respect! Sliding between Spotlight: Megatron and Trailcutter, arguably the best issues to come out of this run, Bumblebee suffers a lot from the comparison. And it takes place during a moment in the IDW continuity that a lot of readers had issues with - Police Action. So I wasn't expecting much. Admittedly, the comic patches up another smaller gap in the continuity of the Costa run, and we know, by now, that Barber adores patching things up. The story itself, however, does not add that much to the characters, main or secondary. Prowl, for example, suffers some flips (and not of the table kind). Sure, 'cause you loved *him*

Even the Metroplex/Metrotitan plot is only casually name-dropped, and there's an ..er.. explanation for those who missed the Megatron and Thundercracker ones. But very rushed, and didn't feel that necessary at all. As I said, this issue is not the most brilliant, and it rehashes the Bumblebee/Hot Rod trope of 'What would Prime do?' for the umpteenth time. Without the very final page, it would have stood as a valid start to the attrition between Prowl and Bumblebee too, but..

Again, the Spotlights are a means for lesser know artists to showcase their talent, and when I saw the preview, I didn't mind the almost ligne claire approach by David Daza. As the story progresses, though, the art loses definition and detail, at times being vague outlines of characters, if that. Not really sure what I'm looking at here

The colours aren't bad, though, and Zac Atkinson does seem to try adding some recognisable schemes to the blotchier figures, though the result is still not satisfying, or reedeming enough for the artwork to shine. Nothin wrong to say about the lettering, but nothing that really stands out, either.

The artwork, including colouring and lettering, is definitely off to an interesting start, and then seems to lose its way with panels progressing. It would have been nice to see another take on the Stunticons, and Earth-modes in general. The lighting, and there's a lot of strange sources, could have improved the general art too, but didn't work that well either.

I almost feel disappointed, as I thought Bumblebee could do with more characterisation. It was interesting to see his Earth mode again, though, and his interactions with Thundercracker, but the whole story felt superfluous. Just some more Barber continuity patching, with little more to show for it. My thoughts precisely. The shrugging, I mean.

So yeah, not the gem of the bunch, not adding much, not subtracting that much either, except for the Prowl moment at the end. I am really not happy nor convinced about that, especially after all the Robots in Disguise work on him (or even the Police Action one, for that matter!). But I suppose it is just an in-pack comic, shoehorned into the continuity.