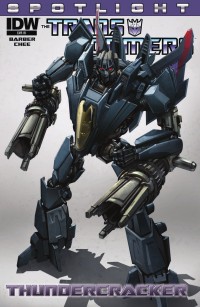 With this week's reveal of the official images of Generations Hoist and Thundercracker, it's time to complete the reviews for the Spotlight series, which now seems to have concluded as far as we know. Read the others so far: Orion Pax, Megatron and Trailcutter and Hoist.

In the dark days of the war for Cybertron, THUNDERCRACKER had a special mission—one never revealed before! Now, as he faces off against BUMBLEBEE for the first time, the fate of METROPLEX—and an entire civilization — is at stake! The first of many THA-BOOMs

Like Orion Pax, this issue takes place before Transformers: Autocracy and, in fact, after the previous Spotlight issue too. It carries on the Metroplex, and later Metrotitans plot, while focusing on everyone's favourite reluctant Seeker(?). The story does continue and pick up previous threads quite nicely, but there are some elements that just don't feel right. Why does he keep information to himself? Does it really follow directly from him not being a fully-convinced Decepticon? How does it advantage his own goals - if he has any?

The events in the issue do involve combat, and we're again introduced to Bumblebee (and some other 'Bots), the next Spotlight feature. But it all seems so rushed, and the Metroplex plot is resolved extremely quickly, deciding to focus on the planet's inhabitants instead.

And they ain't pretty

I'm glad that the Metrotitan plot is developed further, and we get some insight into the powers and abilities of the big 'uns. The protagonist's characterisation, while interesting is a bit.. I actually can't think of the right words. Wait for the Thoughts section, below.

I really don't mind Chee's work on this issue! I think there are some really good pages and detailing, even though the perspective is not always consistent with all the characters. The protagonist himself has some chin-length issues, and I'm still a bit confused about the alt-mode: the robot seems to be based on the upcoming toy (FoC mold) but the jet really isn't. Artistic license? Ronda Pattinson's colours are a very nice touch, too, and work really well between background and foreground, and there's a lot of space to colour outside of ships, around planets and you know, space, up there. Shawn Lee's lettering is nice, and creators always seem to enjoy playing with Thundercracker's signature soundword: THA-BOOM.

Overall, the artwork does present some minor faults, but nothing that distracted me from the story. The idea for the Spotlights is a good one, as new artistic teams can showcase their talent and abilities to different audiences, and this one, to me, delivers.

The story isn't bad, but I kept having the feeling that something was missing, constantly. It was a nice way for Barber to blend different plots, but not enough time was given to either as a result, unfortunately. And like Thundercracker, I'm not really sure what I come away with. If you haven't read this issue yet, it's not that much of a problem. It pads in some stuff for what is hopefully to come, gives some information on the Metrotitans and Metroplex, kind of rounds off Thundercracker, and then just leaves it there. Shame really.