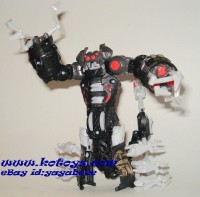 Stalker Scorponok is a repaint of the 2007 Movie Scorponok, who was packaged individually and also in a TRU Exclusive with 2007 Movie Blackout.

For Seibertron.com's first look at RotF Stalker Scorponok, the gallery can be found linked through here

For the link to the Ebay auction, proceed here.

Stay tuned to Seibertron.com for all your Revenge of the Fallen news!

Real Devastator wrote:It look much better than the TF1 version.

I totally disagree. Besides actually looking like the one in the movie, the 2007 version's metallic look is way cooler in my opinion.

I wouldn't have even bought the first one, except that I got it in the two-pack with Blackout. The robot mode is kind of useless, but in alt mode it looks cool on the shelf with the other figures.
Re: Revenge of the Fallen Stalker Scorponok In-Package (942102)
Posted by OmegaConvoy117 on June 25th, 2009 @ 9:37am CDT
much much better than the first movie's, its a real damn shame he was only brief in ROTF, but where the hell was Barricade??? if anyone read Reign of Starscream, Barricade and Starscream were the only Decepticon survivors. sorry im gettin off subject, its a nice repaint, ill be looking for this guy
Re: Revenge of the Fallen Stalker Scorponok In-Package (942185)
Posted by Covenant on June 25th, 2009 @ 12:30pm CDT
I love that color scheme, they should have renamed him Megazarak or just Zarak. AND given him a decent robot mode. The toy itself is no improvement over the last, which was a pass, so that makes this one an easy pass as well.

OR they could have given him a G1 treatment in colors, lol.

This toy is interesting in that the plastic colors seem to match RotF Ravages's toy, allowing them to look good together (rightfully so, as they are minions and have beast modes). What's more interesting is that the color scheme seems to match the character he was loosely based on - Beast Wars Scorponk!