Review for IDW Transformers vs. The Terminator 4 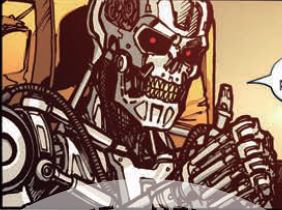 Death and Mayhem
A Review of Transformers vs Terminator #4 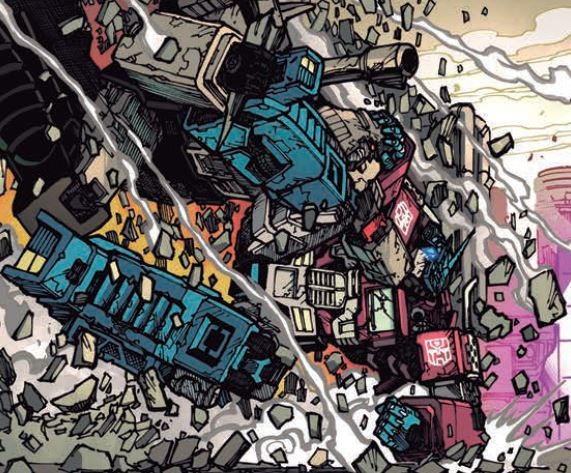 Bayhem is back BABY!

Last week marked the final installment of the Transformers vs Terminator comic and I have to say, this issue felt more bombastic than any Michael Bay movie. That's because this is done in fifteen minutes and it's just non stop action. You've got another classic Optimus vs Megatron Battle, you have Megatron vs Starscream, and the Terminator killing left right and centre with a bombastic finish. Plus you have quite a bit of Ravage thrown in, which is always nice to see from Alex Milne.

What happens in the panel after this is pure nonsense

However, throughout the cacophony there is also some plot and I will be honest, I didn't get it. The writing was not the strong suit of this series, far from it. Since this is a Terminator story, there is a time travel semi paradox story to tell, kinda, and that part totally escaped me. Meaning that the end made absolutely no sense to me. And aside from a tease to what may come later, a good part of this comic really goes out of its way to say that this part is done with an ending that almost reminds me of Beast Machine's ending with a new tomorrow being born from the wreckage. Except if you don't really get how we got to the this ending, then you're just left bewildered.

Hey Bee, buddy, the Terminator just said he hasn't killed all Cybertronians yet, why in the world would you agree to help him finish the mission? You want the suicide hotline number?

Also, Optimus rapidly gets over the death of his fallen comrades, who he has spent eons battling with. It felt really insincere, like the writer had to address it and just dedicated a quick line of dialogue. I don't know what it is with Transformers comics in general, they are very tedious for a long bit and then wrap everything up in a larger than life sort of way that never leaves me satisfied, with writing that jumps around all over the place, never making the comic feel cohesive. It reminded me a lot of the opening arc of the Optimus Prime, or All Hail Megatron or even Stormbringer in structure. I know that last one has it's fans and so may this Terminator crossover but I am not one of them.

Back to the art, it's always a treat to see Alex Milne draw Transformers. He draws as many transformations as he could, almost like he is making up for the times he didn't on the Roberts run to the point where it feels unnecessary. For instance you'll have Bumblebee in robot mode in one panel and then soon after you see him transform from car to robot in the next. I do really wish the shadows were left to the colorist, however, rather than adding a grid pattern, it muddies the art. 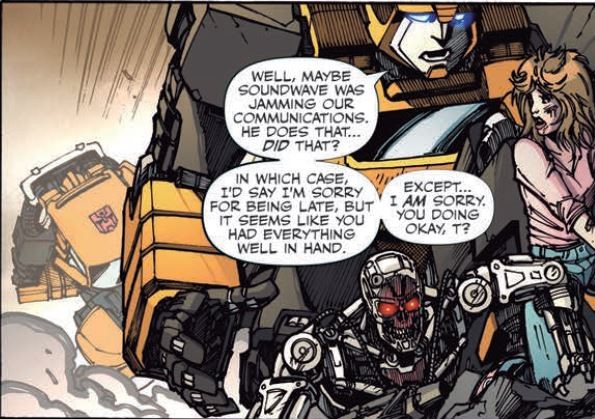 Weren't you in robot mode on the previous page?

In the end, this was a well drawn short series that shows that the franchises can work together, I just wish it was better written overall. If you are going to write a yarn dealing with time travel, you have to make it simple and clear and I didn't get this here. In the end, my score for this issue is the same as the first issue and the series overall.

You can pick up this issue at the Seibertron.com eBay store or at your local shop, check here to find the closest shop to you.

DC's Hill House imprint series was notorious for rushed endings, and you'd swear the writers took cues from those books on how to wrap up a series.

Sure, they leave it open for a sequel series, but that's still no excuse to how it ended.
Re: Review for IDW Transformers vs. The Terminator 4 (2082834)
Posted by Stormshot_Prime on October 5th, 2020 @ 3:30pm CDT
If only this series had gotten one more issue like the Star Trek crossover had, I feel like a lot of the Terminator-y time travel bits could be fleshed out a little more.

That aside, I really loved this series, it’s definitely my favorite of the crossovers so far. The action, the art, the high stakes 80’s action movie vibes, it had it all.
Re: Review for IDW Transformers vs. The Terminator 4 (2082873)
Posted by Big Grim on October 6th, 2020 @ 5:07am CDT
It really annoyed me that "seasoned warrior" Arcee, after threatening the Terminator, didn't then notice him placing mines around the Ark and seeding the area while stood with him and indeed, him chucking them out of her window as they were driving about. And where did he store them?!? Made zero bloody sense.

I don't know what it is with Transformers comics in general, they are very tedious for a long bit and then wrap everything up in a larger than life sort of way that never leaves me satisfied, with writing that jumps around all over the place, never making the comic feel cohesive. It reminded me a lot of the opening arc of the Optimus Prime, or All Hail Megatron or even Stormbringer in structure.

I think the issue is writing to three-act structure, or something close to it, which leaves almost no time for things to wrap up after the climax. Alternately, the writers don't care about the ending as much as they cared about the way there, which is fine for a crossover book but also one of the reasons they have a tough time being more than diversionary exercises in brand awareness. I think the structure of the My Little Pony crossover might be my preferred thing for this kind of book - humorous short vignettes that don't get too worried about convoluted overarching plots which could never get enough space to be resolved in a satisfying way.