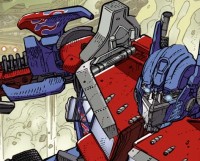 The issue starts out Megatron monologing to an imaginary Optimus Prime – again. And yes it's annoying. While doing so we cut back to The Autobots saving Sam and Company from Club Starscream.

"Life is the right of all sentient beings - except for those I don't like."

Prime then gets a call from his good friend Jolt, how how many adventures they had, and gets to witness first-hand how Shockwave kills him and the rest of the NEST base.
Speaking of which, that's exactly where we're going now. Fearswoop and Shockwave have a bit of a talk about killing Autobots, the former even remarking how unusual Shockwave's Autobot killing style is. And both of them kill, Autobots and humans, if you hate humans in your TF fiction – you'll love this series. Both leave the base.

"Welcome to the Jungle, we've got Fun and games!"

Thinking about it, she does look like General Akbar.

Back to Prime, Shockwave shoots Wheeljack and Mirage to bits, Prime asks him
“WHY?”
Shockwave replies
“Why What Prime? I live to kill”
I love this Shockwave

Fearswoop, swoops in to help Shockwave, but crashes and dies in mid-air. Turns out that Wheeljack generated a force field around Prime and Shockwave. Prime threatens to kill Shockwave.

We end out comic with Starscream demanding to know why he was used as bait by Megatron, who replies with
“Have patience Starscream”
Oh he also finishes his monologue.

Get a Blog, Megatron.

My thoughts:
The art:
You know, in my previous reviews I kept pointing out how the art looked bad and how the colours where bad, that has changed. The line-work, like I said previously isn't bad at all, it's not brilliant but it's really pretty good, but what about the colours? Well those are actually not that bad this time around. The colours have improved greatly and really show off the line-work now.
Overall the art is not brilliant, but it's pretty good.
I give the art 7 out of 10 stars.

On the writing
The writing is OK. This issue was kind of annoying to read, due to the events being broken up so suddenly, with something different at a different location with different characters happening on every second page, seriously.
So this issue was writing wise not that cool due to, well the distorted scene transmission, if this where a 20 minute long film, the plot-threads would rotate at a 1 minute time frame.
I give the writing 5 out of 10 stars.
This puts the comic at an average of 6 out of 10 stars.

So how’s the complete series? Well I guess I would rate the full story line at about 6.5 stars out of 10. I guess I'll try and get this in TPB form; yes I kind of enjoyed this series.

Starscream GaGa wrote:I guess that confirms that the Einstein-bot is, in fact, Wheeljack seeing as we know that the Ferrari is Mirage.

Freaking YES. This puts all of my doubts to rest - I was scared that Wheeljack would be comic exclusive, with "Q" being a crap version of Perceptor.