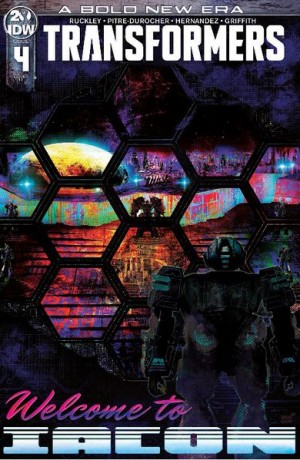 “All this with Brainstorm is throwing everyone off. A lot of us knew him for a long time. Not friends, maybe, but we knew him.”

Is there a sadder phrase that could be said about someone so recently departed? Who indeed actually KNEW Brainstorm and called him friend? We may find out this issue as we continue the journey that is IDW Transformers ‘the bold new era’ with issue #4: 'The World in Your Eyes’ Part 4.

Primus has seen fit to give me reviewer rebirth in time to do the review of issue #4. Maybe, in fact, it is actually Liege Maximo who brought me back with intent to watch my slow, agonizing death at the hands of the plodding plot in this book. At least, unlike Brainstorm, it won’t be a mystery that takes 10 issues to resolve what happened to me. I kid, it’s not that bad. Really…well, maybe. 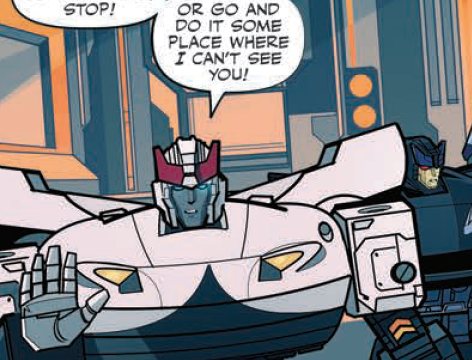 This is mostly spoiler-free review, but there’s not much to review without sharing some content, so be forewarned….as Prowl says, 'proceed at your own risk.'

I’m going to echo last week’s review here when I say, the issue starts in a pretty dramatic way. Partially because (as you probably saw in the preview pages) a brooding fan-favorite robot with a penchant to sing old Cybertronian ballads returns as a possible suspect to Brainstorm’s murder. YES, readers, it does INDEED seem like we have moved to the realm of having a suspect (other than Rubble, seriously, is Rubble really a viable suspect?)…but really Cyclonus is treated more as a person of interest who may have viewed something of importance in his life of being a hermit in the dune see of Tatooine (no, not really).

But that isn't the only reason to like the beginning, Transformers veteran artist extraordinaire Sara Pitre-Durocher (of ‘Windblade', and ’Til All Are One’ fame) is welcomed back to Transformers creativity and steps in to bring the first 6 pages to life; drawing very familiar and fluid Windblades and Chromias for us to enjoy along with new character Geomodus and the aforementioned Cyclonus. 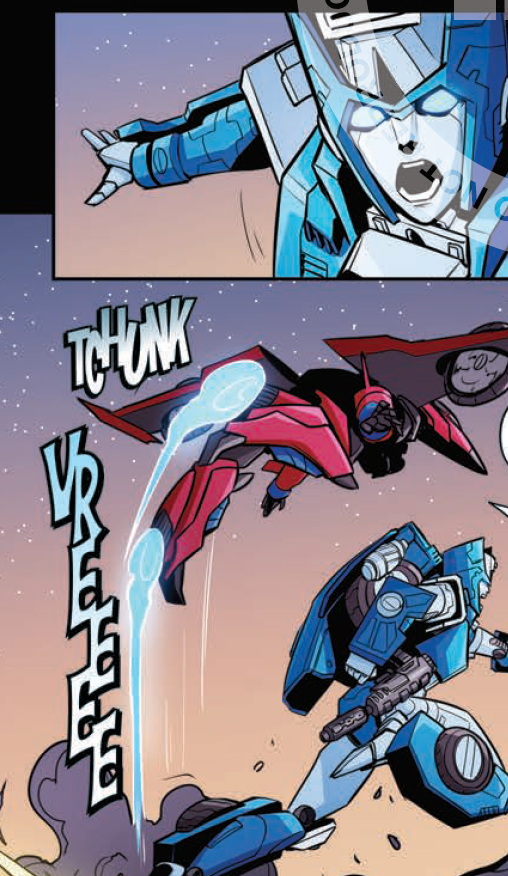 Cyclonus is revealed to be a little intriguing. So much so that the reader has immediate questions about his current situation, allegiance, abilities, and, of course, his innocence or guilt —without sharing too much of a spoiler—.

Act 2 has us witnessing the next forging celebration, which is said to be a BIG deal because they are not supposed to happen often, and this one is occurring in very little time from Rubble’s own very recent forging. Hasbro sees fit to use the pages to advertise even more upcoming product with the introduction of Shattered Glass Prowl (said with tongue in cheek), who is working as security alongside regular-verse Prowl. 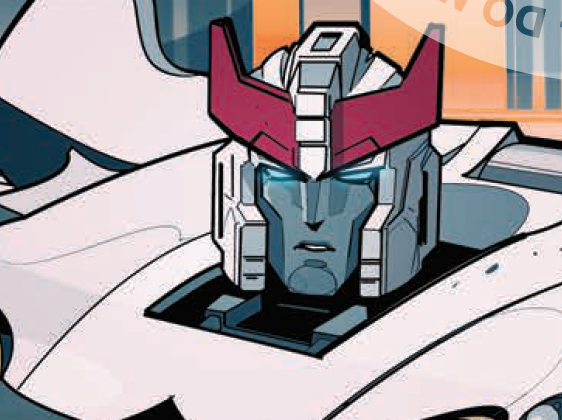 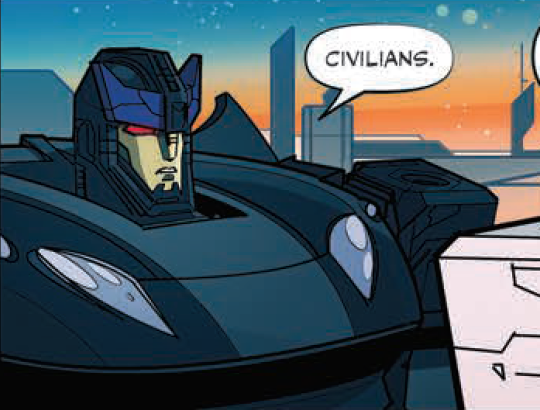 Was Prowl Barricade's mentor? He certainly taught him the Prowl scowl. 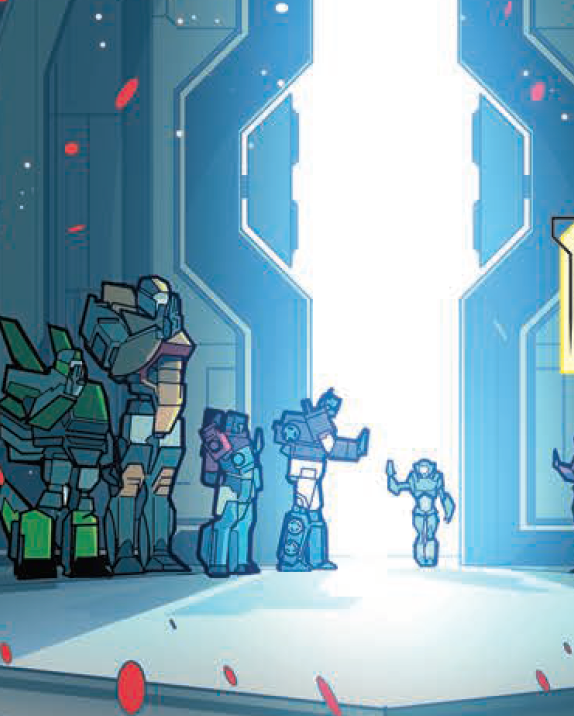 When a new bot is forged, it must high-five everyone. E-V-E-R-Y-O-N-E.

The 3rd act juxtaposes the second act in that instead of celebrating a new forging, Brainstorm is being laid to rest. It’s a solemn gathering at best, led by a new female character of Reversionist affiliation designed by Andrew Griffith that he proudly teased to twitter a week ago. Griffith’s art is refreshing trip down memory lane, very appropriate for a moment in which Brainstorm is being honored and remembered.

These two very large moments and how they are related have not escaped the more thoughtful characters as Orion Pax has an outpouring of thoughts to the ever-present Ironhide related to life, death, and factions.

We see many notable, first appearance characters attending, unsure which are friends, and which are there because of ‘how it looks’ or ‘it’s an expected tradition’. It seems that Orion Pax and Megatron cannot be in the same space without having a political disagreement, and reviewer ScottyP had some accurate points to make about how Griffith is deftly handling the moment; showing and conveying actions and emotions clearly representing this heightened sense of tension and the rising uncertainty especially between Ironhide and Megatron.

Blinking contests on Cybertron can last for centuries.

Since I effused on Pitre-Durocher and Griffith a bit already, it’s Hernandez turn. Hernandez keeps the style consistently inconsistent using more shape-driven, less-detailed characters, most of the time, but surprising us at times with some very detailed faces. For me, the general style has taken some getting used to. It’s not that I don’t think the artist is talented, it’s a new style that currently lends itself to this incarnation of Transformers fiction that, well, has been met with some derisiveness. Readers looking for background character nods as we were used to in the past, won’t find much here, as focal characters are clear and known, but background characters are bland and non-specific, at times, barely more than simple polygons put together. I really enjoyed the scavenger hunt of crowds before, here, it’s more of a ‘do I see these as members of the general Cybertronian populace or not’. Between the three artists, there are clear styles and contrasts, which can serve well in separating the three acts, or generate interest to those with particular style leanings. 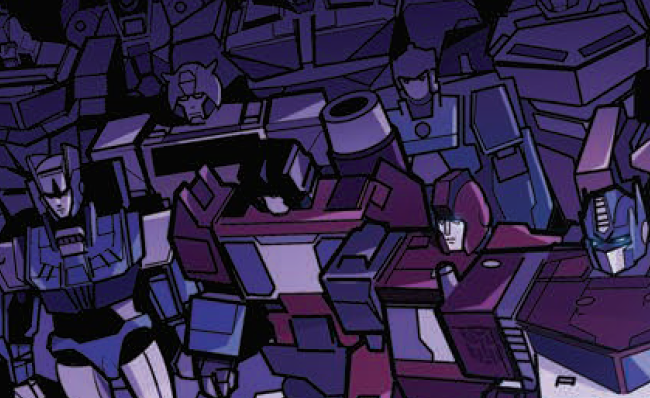 Someone told them a spoiler for ENDGAME. This was the result.

The pages are colored well by the team of Joana LaFuente and Josh Burcham; names familiar to IDW Transformers comics readers. For those unfamiliar, you can tell how very well these two individuals can help to portray the different moods, and acts simply through the choices of color. Bright, jubilant colors for the celebration. Darker, colder tones for the funeral. Great additions to the story telling,

One can’t talk artistic teams and creators without putting Tom B. Long’s name out there. Word panels and letters should never distract one from the overall telling of the story. No worries, Mr. B.Long’s letters belong on any page and are used well. The adeptness with naming sounds, and then showing them is also a known strength.

I also wanted to mention the cover choices. There are several choices and many are brilliantly created pieces that of their own accord, may be the sole reasons for people to purchase the issue. The two different versions of Shockwave really drew my eye; clean and battle-damaged; and the cover by Jeffrey Veregge. I’m not sure on the rarity of each, but from what I know the Veregge version can be difficult to obtain for many. 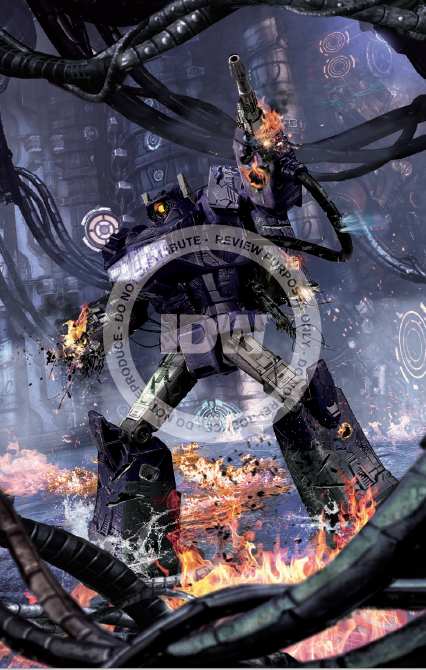 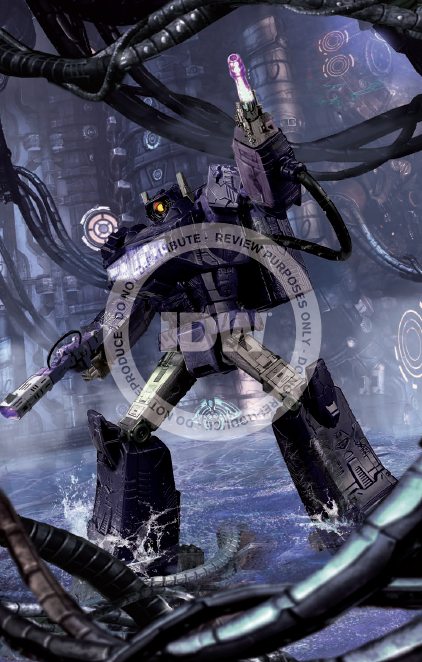 When I think about destroying you I hold myself.

In summation, this was another small step forward and an issue that is a little more interesting than the first three. Not much better though… and Ruckley will still hear rhetoric about pacing as being a major complaint of the current issue, as well as, ‘not much happens’. Is Ruckley slowly losing the audience that he inherited with the success of the previous comics?

Are you excusing yourself from reading any more issues?
The world-building aspect is still happening, but the smaller plot involving the murder has quickened its pace from slow as molasses to at least a snail’s crawl. I really liked how the three different artists used their personal talents to represent the three different acts of the story. Having the veterans back, even if only for a few pages, helped to connect the previous readership more with the new era. 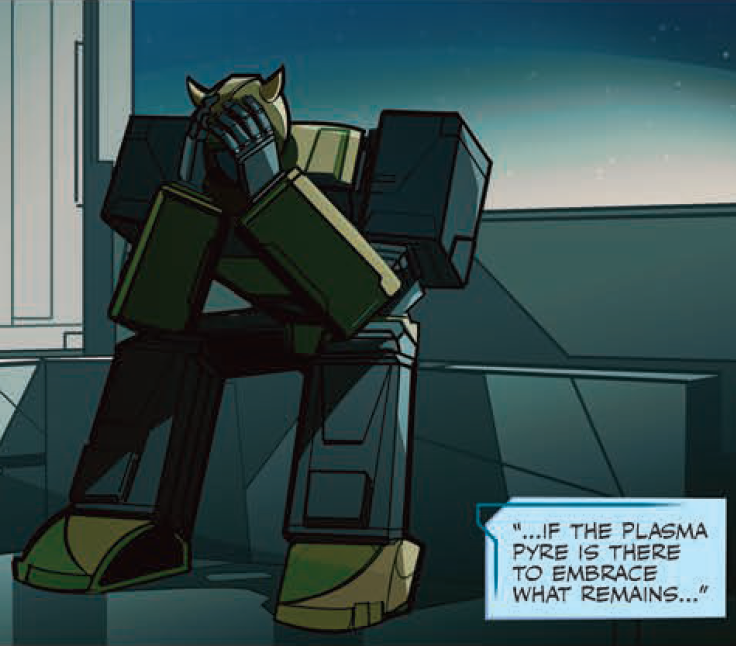 Just read the first four issues of Transformers.
Yes, I could have just said, it’s basically more of the same. Squish these four issues together, and move us further ahead with character development, and not as much with world building. It is more of the same, but does have some cool pieces to it. Will you continue to read the series? Are you intrigued enough to continue despite misgivings? Or are you ready to jump ship?

SG Roadbuster wrote:i've been an ardent reader and defender of the idw comics for years now. even through the rough patches that were the mcarthy and costa eras.

this comic is soooooo **** boring.

Yeah that’s how I felt too.

Tigertrack doesn't like putting scores on reviews because he's a nice person and a gentleman, so when he does it's likely to skew a point-ish higher than what me or Dalton would do

Yeah that’s how I felt too.

Tigertrack doesn't like putting scores on reviews because he's a nice person and a gentleman, so when he does it's likely to skew a point-ish higher than what me or Dalton would do

Personally I liked this a little better than 2 and 3, but I'm still kinda bored.

I’m just really digging it. Not saying anyone else is but I just shut out the last 15 years of IDW and do my best to just focus on this while reading. It’s hard I’ll admit but I’m really looking at this without being bias.


It is a slow burn. Very much a slow burn but I’m liking a lot of what I’m reading
Re: Review of Transformers - A Bold New Era - Issue #4 (2022078)
Posted by David Leese on May 20th, 2019 @ 1:36pm CDT
Agree with a lot of the sentiments about the walking... walking and talking (and the excessive amount of it) featured in my video review of Issue 4 and my summary of Issues 1-4 (there was so little to talk about that I ended up summarising all four issues in one video)

And I am not at all impressed at the early (as in at least 4,000,020 years early) arrival of one of the future Decepticons. I'm with Prowl - it's so bad I almost wish Starscream was here.

Persevering, but not enjoying this as much as I thought I would.